KINSHASA, Sep 23 2011 (IPS) - Sometime in the next two months, activists and survivors of horrific violence in the eastern Democratic Republic of Congo will find out if Callixte Mbarushimana will stand trial for war crimes and crimes against humanity. 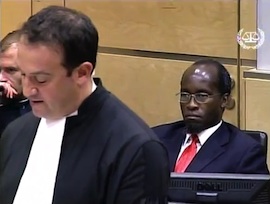 Mbarushimana is the executive secretary of the FDLR – the Democratic Forces for the Liberation of Rwanda – a rebel movement which has operated in the eastern part of the DRC since 2005.

The prosecution alleges that he directed FDLR fighters to murder, torture and rape civilians in the provinces of North and South Kivu in 2009, as a strategy to strengthen the rebel movement’s hand in negotiations with the Rwandan government. Judges will confirm or reject each of eleven charges before the end of November.

“He was the linchpin, the man who could transform crimes committed in the Kivus into political leverage in Rwanda,” International Criminal Court deputy prosecutor Fatou Bensouda told judges at the opening of a confirmation of charges hearing in The Hague, which opened Sep. 16.

“The hearing builds up hope for thousands of victims like me,” says Nestor Habamungu, a geography teacher at the Mwanzo Institute in Bukavu, in South Kivu. “During an FDLR raid in Walungu, in South Kivu in February 2005, my parents were killed, fighters ransacked our house and burned the neighbours’ house down with three people inside. I survived because I was staying with a family friend in a nearby village.”

On Sep. 13, just prior to the confirmation hearing, Mbarushimana's lawyer, Nicholas Kaufman, asked the ICC to rule the case as outside its jurisdiction, arguing that the DRC government had failed to clearly state that it regarded the crisis in Kivu a matter for referral to the ICC.

In August, the Pre-Trial Chamber invited the DRC to submit, by Sep. 12 at the latest, its comments on the objection to the ICC's jurisdication as raised by the defence. But the Congolese authorities failed to do so.

Ghislain Monga Mabanga, a lawyer representing 63 of the 130 victims, says the necessary referral was long ago accomplished in a Mar. 3, 2004 letter from Congolese President Joseph Kabila, who referred the situation throughout the country to the ICC prosecutor's attention.

Numerous reports from the United Nations as well as various NGOs find that the atrocities committed by the FDLR since 1994 have claimed millions of victims, including women, children and the elderly.


“The opening of this hearing was an important step which will allow justice to be served for thousands of victims of serious crimes committed in the eastern part of the DRC,” says Armel Luhiriri Byamungu, the DRC liaison officer for the Coalition for the International Criminal Court (CICC), an international civil society grouping which works to support and strengthen the work of the ICC.

But if some are celebrating progress, others worry that the pace of prosecution of crimes in DRC is too slow. Marie Claire Mwilarhe, a teacher in the Kalamu commune of the Congolese capital, Kinshasa, told IPS her father was killed by machete-wielding FDLR fighters in Mwegerera, South Kivu in 2006.

Pointing to another ICC prosecution, that of Thomas Lubanga Dyilo, who was arrested in 2006 and charged with recruiting child soldiers in the northeast of the country, she said she fears the ICC’s lengthy processes will achieve nothing in the end, and only discourage victims of violence.

“The case of Thomas Lubanga has been pending for years now,” she said. Charges were confirmed in January 2007; the trial only began two years later and is still under way.

Desiderata Boji, president of the Kinshasa-based rights group Women in Solidarity for Peace and Development, adds: “There are many victims who have died in the meantime without being compensated. Their neglect won’t encourage other victims to become civil parties to the court cases at the ICC, or to cases in the Congolese justice system.”

A Sep. 15 press release issued by the DRC office of the CICC admits that there have been problems with the participation of victims in this case.

The communiqué says the decision allowing 130 victims to participate in Mbarushimana’s confirmation of charges hearing was made only one week before the hearing was initially scheduled to begin in August, and that hundreds of other survivors who had asked permission to participate were omitted simply because the ICC’s Registrar was unable to handle requests from 470 victims in time.

But Congolese lawyer Maurice Kanyama is more forgiving of the ICC. “Beyond the difficulties posed by gaining access to the zones where these crimes took place, the limited participation of victims in pending ICC cases is not due to the slowness of the court,” he told IPS.

“Above all, it points to the internal weaknesses of the NGOs who are working to identify victims on the ground,” says Kanyama. “Budget constraints are no longer an excuse, since there is a ‘Victims’ Fund’ that covers the cost of participation and legal representation, which is provided by member states and other donors.”