YAOUNDE, Jan 26 2012 (IPS) - When Cameroon’s President Paul Biya announced that the 50th anniversary of the reunification of French and British Cameroon will take place later this year, it resurrected bitter feelings among Anglophone Cameroonians who say they do not feel like equal partners with their Francophone counterparts. 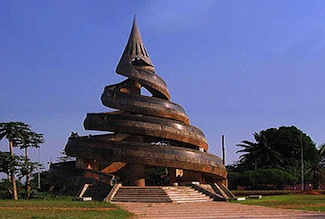 The reunification monument in Yaounde. Anglophone Cameroonians say they do not feel like equal partners with their Francophone counterparts. Credit: Ngala Killian Chimtom

Jannette Ngum, a primary school teacher from the English-speaking Northwest Province, said she would love to never have anything more to do with Francophones in Cameroon. In this West African nation, Anglophones make up a minority, about 20 percent of the country’s 20 million people, and most live in the country’s two English-speaking regions, Southwest and Northwest Provinces.

Ngum’s frustration comes after the shabby treatment she received at the Ministry of Public Service and Administrative Reform when she went to Yaoundé to follow up on her job application to the public service.

“When I spoke in English the lady frowned and said ‘Je ne connais pas votre patois –la’, which literary translates into ‘I don’t understand that dialect of yours.’’’

“Instead of serving me, she continued playing cards on her computer. But when a colleague of mine came in and spoke in French, he got what he wanted in seconds. Yet the constitution clearly states that English and French are the official languages in Cameroon, and therefore equal in status,” she told IPS.

But Ngum’s experience is a common one among Anglophone Cameroonians. Michael Ndobegang, a history lecturer in the University of Yaoundé, said that Anglophones in Cameroon feel “reduced from partners of equal status to a subjugated people.”

According to Ndobegang, Anglophones have been systematically removed from the centres of power, with unwritten laws making it impossible for them to hold certain key government positions. Since independence, no Anglophone has ever been a Minister of Defense, Finance, Education or even Foreign Affairs.

“Anglophones have been appointed mainly into subordinate positions to assist Francophones, even where the latter have been less qualified or incompetent. This is the dilemma of the Anglophone in Cameroon”, Ndobegang told IPS.

In June 1990, J.N.Foncha, the main architect of the federal state, resigned from government saying that “the constitutional provisions which protected the Anglophone minority have been suppressed, their voice drowned…”

Economically, Anglophones also feel exploited. “Cameroon’s oil comes from the Southwest Provincce. How come the road network in the region has been abandoned?” Fru Ndi, the Anglophone opposition leader of the Social Democratic Front (SDF), asked during a rally in Buea, in the run-up to the October 2011 presidential election in Cameroon.

He also blasted successive Francophone administrations for killing the vibrant economy of the British Cameroons. “Small- and medium-sized enterprises in the region, such as the West Cameroon Development Agency, Power CAM, and the West Cameroon Marketing Board have been destroyed,” he told his supporters during the rally.

Ndi, initially opposed to the idea of secession from Francophone Cameroon, seems to have changed his mind. “If the SDF is again denied victory during this year’s parliamentary elections, then I will be left with no other option than to join the SCNC,” Ndi told members of the SDF’s National Executive Committee on Jan. 19. The SCNC or Southern Cameroons National Council is a secessionist movement.

Anglophones are also at odds with what they perceive as discriminatory practices when it comes to recruitment into the civil service.

Years later, not much has changed. Statistics from the Ministry of Public Service and Administration Reform indicate that of the 25,000 young certificate holders recruited into the public service last year, less than 2,000 were Anglophones.

This, the authors say, has created an Anglophone consciousness of “the feeling of being re-colonised and marginalised in all spheres of public life and thus being second-class citizens in their own country.” Government though denies the fact that there is an Anglophone problem in Cameroon. Instead, its strategy has been to use state violence against secessionist groups. And some of the Anglophone elite have been co-opted into government to down play the existence of a problem.

Meanwhile, the celebration of the 50th anniversary of Cameroon’s reunification will take place in Buea, the capital of the southwest region.

“It is just natural; it is true to the history of this country,” says Mbella Moki Charles, the Mayor of Buea, of the celebration that will be hosted by his town. But the national communication secretary for the SCNC has said that Biya will be attending the celebrations in Buea as a foreign head of state. “We have been inviting other heads of state and Biya, the president of La Republique du Cameroun, is also invited,” he told IPS.

Political Punch, a regional newsletter with SCNC sympathies, has called for the president to apologise to Southern Cameroonians before going to Buea.

“For the past 20 years, over 700 Southern Cameroonians have been arrested, dragged to court and charged for secession for simply honoring the date of Oct. 1 as a historic and most important date in this country,” the publication said, revealing that over 100 lives have been lost in the process.