CAMEROON: The Taps Have Run Dry

YAOUNDÉ, Dec 29 2011 (IPS) - Mama Rosalie of Damas quarter in the capital of Cameroon trudges down a narrow, winding footpath, headed for a narrow stream running far below, a 20-litre water container in her right hand.

The sight of women and children trekking long distances in search of water is a familiar one across Africa. But Mama Rosalie did not imagine she and her six children would be rejoining this daily journey.

“More than five months ago, the pipes in my house ran dry. Now I have to trek five km every day to this valley to fetch water,” she tells IPS.

Basile Atangana Kouna, the minister of energy and water resources, who is also director-general of the Cameroon water utility CAMWATER, says there are several reasons why neighbourhoods like Mama Rosalie’s have lost their water supply. 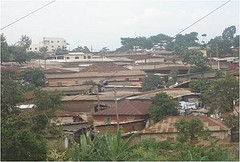 Higher-lying neighbourhoods in Yaoundé like this one have seen their pipes dry up, as water pressure has dropped due to the growth in demand. Credit: Sustainable Sanitation/CC BY 2.0

“The city of Yaoundé with its over three million people requires a daily water supply of 311,000 cubic metres,” said Atangana Kouna, “but the Akomnyada treatment station which supplies the city has a daily production capacity of only 100,000 cubic metres.”

The minister told IPS that the shortfall is explained by the fact that for the past 20 years, no investments have been carried out in the water sector in Cameroon, and the existing water infrastructure has been neglected.

According to Atangana Kouna, the lack of investment in water infrastructure was caused by the World Bank and IMF-imposed structural adjustment programmes that practically put a freeze on government spending

“In addition, the flow of water in the Nyong River on which the treatment plant draws is falling, while the population of the city is steadily increasing,” says Joseph Kemogne, chief of the CAMWATER distribution division.

As urban growth places higher demands on water supply, water pressure in the system has gone down, and neighbourhoods on higher ground like Damas have been cut off.

“The current system did not take into consideration the fact that the city would be expanding so rapidly,” Kegmone says, explaining that as more people flock to the capital, it is becoming increasingly difficult to get water up to higher-lying areas like Damas, even if water initially flowed in the pipes in such quarters.

He further told IPS that the falling levels in the Nyong River are caused essentially by the diversion of the rivers’ waters for irrigation schemes in the arid northern parts of Cameroon, but also by the troubling phenomenon of climate change.

According to the United Nations Development Programme (UNDP), mean annual rainfall in Cameroon has decreased by 2.9 mm per month since 1960.

The failing urban water supply has proved profitable for some. Damas residents like Pierre Kwekam now ferry truck-loads of water from a public borehole about 10 km away in Obobogo for sale in his own neighbourhood.

“But the primary goal has not been to make a profit,” he is quick to add.

Kwekam sells 20 litres of water for 100 CFA, the equivalent of 20 cents of a dollar. His customers complain that this is too expensive, but they have little choice. “Water is life, and even if he were selling a 20-litre jug at 200 CFA (40 cents), we would still buy,” says Jessica Mdzeka, another resident of Damas.

She spends at least four dollars a day to meet the water needs of her family of seven – a significant sum given that she earns just 200 dollars a month as a primary school teacher. The water is nearly eighty times more expensive than what residents previously paid for piped water: 63 CFA (slightly over 10 cents), for 1000 litres.

Since October 2011, a mixed commission set up by President Paul Biya has been distributing water to 17 neighbourhoods in Yaoundé, including Damas, that have been badly hit by the water crisis. The commission is comprised of representatives of the fire fighters brigade, the police, the Yaoundé city council and CAMWATER.

“We have established a daily calendar for distributing water to these water-bankrupt neighbourhoods,” says fire brigade captain Herve Samnick.

“We target two or three neighbourhoods each day, supplying them with a total of 120 cubic metres of water.” He says the distribution team returns to each neighbourhood after four or five days to re-supply them.

Residents generally seem satisfied with the emergency measures. Many have purchased additional containers so they can store more water each time the commission makes deliveries.

“Each time the commission comes, I make sure I fill all the containers in my house, which hold about 170 litres,” Mdzeka says. “This is certainly not enough to meet the needs of my family for the three or four days we have to wait for the commission to return, but the situation could have been worse if no deliveries were made at all.”

The ministry of energy and water resources estimates that by 2015, Yaoundé will need a daily water supply of 400,000 cubic metres. The government plans to build the Mefou Plant with funding from the African Development Bank. But this will only provide an additional 50,000 to 60,000 cubic metres of water a day.

In the face of this dire situation, the government has launched an 885 million dollar mega-project to pipe water from the Sanaga River to Yaoundé. This is expected to result in daily water production of between 300,000 and 400,000 cubic metres which, added to the existing supply, will largely satisfy the needs of the country’s capital.

Government officials say about half of the financing will come from the Exim Bank of China, while the rest of the money will be raised locally through the issuance of treasury bonds.

But Cameroon’s capital city is not the only problematic spot. Official statistics indicate that only 29 percent of the population has access to safe drinking water – a situation that frequently contributes to outbreaks of water-borne diseases in the country.

In 2010, for instance, over 400 people lost their lives to cholera in the country’s North and Far North regions – a disease whose spread is usually the result of inadequate access to good drinking water and poor sanitation.

The government plans to step up national access to potable water from 29 percent to 60 percent by 2015, in efforts toward meeting the Millennium Development Goal on water, which is to reduce by half the proportion of people without sustainable access to safe drinking water.

In January, the government signed agreements with a consortium, including the French Development Agency and the European Development Bank, worth a total of 130 million dollars.

The money will be used to improve water supply to five municipal areas: Yaoundé, Douala, Bertoua, Ngaoundere and Edea. The project to pipe in water from the Sanaga River is in addition to this scheme.

But until the projects are implemented, Mama Rosalie will continue to plod down the slope to the brook in search of water – in a country that has the second largest hydroelectric potential in Africa, after the Democratic Republic of Congo.