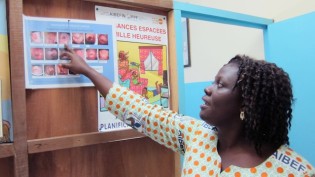 By Fulgence Zamblé
After 17 years of women struggling for parity with men in the household, Côte d'Ivoire's legislature has finally adopted a law which establishes equal responsibility for legally married spouses. But not everyone is happy.

By Fulgence Zamblé
Women farmers in Côte d'Ivoire are achieving greater autonomy and economic independence thanks to new varieties of cassava.

By Fulgence Zamblé
Nine women in the northern Côte d'Ivoire town of Katiola have been convicted for carrying out female genital mutilation – the first time that a 1998 law banning FGM has been applied.

By Fulgence Zamblé
A shiver ran down Habiba Kanaté's* spine when she read about a policeman shooting and killing his wife in Abidjan, the economic capital of Côte d'Ivoire. "That could have been me," she said.

By Fulgence Zamblé
Twelve-year-old Ahmed* pauses on his crutches in the narrow lane that leads from his house to the main road, glancing at the bullet holes still visible on the walls here in the Abobo Park 18 area of Abidjan. He sighs, then speeds up again to catch the bus that will take him downtown to the Adjamé quarter.

By Fulgence Zamblé
The births of tens of thousands of children during Côte d'Ivoire's eight-year rebellion were not formally recorded. Providing these children with birth certificates is one of the mundane yet vital challenges facing the authorities as they work to re-establish the country's public administration.

By Fulgence Zamblé
Environmental groups in Côte d'Ivoire say the illegal logging and sale of wood from the African gum tree is exposing the north of the country to the encroaching desert. The NGOs are calling on the authorities to take firmer action against the illicit timber traders – who allegedly include government officials.

By Fulgence Zamblé
Sea levels on the coasts of Côte d'Ivoire and other West African countries have risen again this year, devastating houses and other infrastructure. The search for effective solutions is lagging behind accelerating coastal erosion.

By Fulgence Zamblé
Between now and 2012, the Côte d'Ivoire government plans to establish a scrap metal processing industry that will supply finished products to domestic and regional markets. It is unwelcome news for the country's existing scrap dealers.

By Fulgence Zamblé
The international community's efforts to deny embattled president Laurent Gbagbo access to funds from cocoa exports have resulted in hundreds of thousands of tonnes of Ivorian cocoa surfacing in neighbouring countries.

By Fulgence Zamblé
The political stand-off between Alassane Ouattara, certified by the United Nations as winner of Nov. 28 elections, and the incumbent president, Laurent Gbagbo, who has refused to step down, is stretching into its eighth week.

By Fulgence Zamblé
Presidential elections in Côte d'Ivoire, scheduled for Nov. 29, were postponed until February or March 2010. Among the candidates who will try to take advantage of some additional time to campaign will be the sole independent candidate, Jacqueline Oble.

By Fulgence Zamblé
When a major agribusiness company began clearing the rich reservoir of biodiversity of southeast Côte d'Ivoire's Tanoé Swamps Forest for an oil palm plantation, ecologists and local communities demonstrated in favour of preserving it.
ADVERTISEMENT ADVERTISEMENT