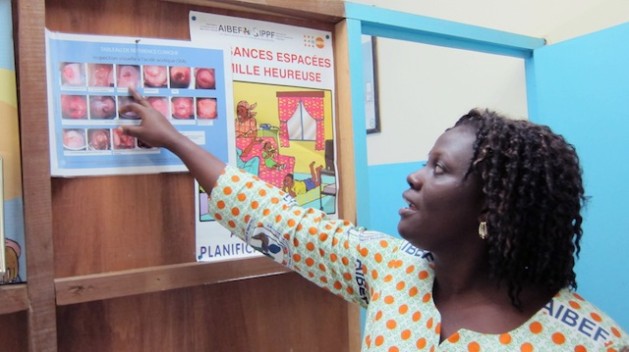 A health worker explains the sexual transmission of infections at the family planning clinic in Yopougon. ARV shortages and long waits discourage women from starting or staying on treatment. Credit: Kristin Palitza/IPS

Bahi tested positive in her third month of pregnancy. In October, the 32-year-old was five months pregnant and still had not revealed her HIV status to her husband.

“Despite the midwife’s advice, it is difficult to tell my husband.  If I do, I will be thrown out of my home,” Bahi says. “For now, when I can get hold of antiretrovirals (ARVs), I take them in secret.”

Suzanne Asseman*, a 37-year-old housewife from Agboville in southern Côte d’Ivoire, learned she was HIV-positive in June 2012. She has to travel to Abidjan, 80 kms away, for the ARVs that keep her healthy.

This is not easy because Asseman is seven months pregnant. When she finally received her ARV pills for October, she had missed five weeks of treatment.  ARVs must be taken regularly every day or their efficiency is compromised.

Asseman has always waited one or two weeks to get her medication, but this time the wait was longer. Now she has doubts about her treatment.

“I was reluctant to go on ARVs. Where I live, the medication has expired by the time it gets there,” she confides to IPS. “I think I would rather stop taking the drugs than keep up all the running around.”

Rolande Yao, a social worker in the PMTCT centre in Attécoubé in central Abidjan, says that stigmatisation is increasing, and the frequent disruptions in ARV supply create yet more difficulties for patients.

Three out of 10 pregnant women living with HIV in Côte d’Ivoire miss out on PMTCT, says the Joint United Nations Programme on HIV/AIDS (UNAIDS) in its 2013 Progress Report on the Global Plan.

“When a man is told his wife is HIV-positive, often he suspects her of being unfaithful,” says Yao. “He may refuse to be tested and reject his wife.”

Yao estimates that seven out of 10 women experience rejection and that, despite intervention by medical staff, many husbands refuse to take them back.

Fear of rejection prompts pregnant women who have tested positive to change their health centre or to keep silent. Others become lost to the medical system, avoiding antenatal medical care and risking passing the virus to their babies, Yao adds.

According to Cyriaque Ako, coordinator of the M2C (Mother to Child) project, many of these lost cases make their way to traditional healers.

M2C works in Yopougon, the country’s most populous community, near Abidjan, where women prefer to go to healers and many do not know about PMTCT, explains Ako. The project, now in its second year, aims to link women from 15,000 poor households to health and HIV testing centres.

The HIV prevalence rate is 3.2 percent in this West African country with a population of 20 million, which struggles to contain the epidemic and care for its estimated 450,000 HIV positive people, according to UNAIDS.

Some modest progress is visible. UNAIDS points out a decline in the number of children newly infected every year, down from 6,700 in 2009 to 5,000 in 2012. “Declining, but not rapidly enough,” says the Progress Report.

However, AIDS non-governmental organisations (NGOs) complain that since the end of the 2011 to 2012 post-electoral crises, people living with HIV seem to have been abandoned. The NGOs have regularly sounded the alarm on the repeated ARV supply disruptions.

One of the main causes of the ARV shortage has been the collapse of the health system over a decade-long political crisis, starting with an armed rebellion in the north and west of the country and simmering into post-electoral conflict.

During this period, the international community imposed arms and trade embargoes on Ivorian ports – Abidjan and San Pedro – in order to force former president Laurent Gbagbo to leave power after his electoral defeat. Medicines ordered from Europe could no longer be delivered to Côte d’Ivoire. In addition, many health facilities were looted and closed temporarily during the fighting, according to the NGOs.

Yaya Coulibaly, president of the Ivorian Network of People Living with HIV, which is known by its French acronym RIP+, says “community advisors and prescribing doctors have to lie to patients because there are not enough ARVs at the government pharmacy.” Even the basic ARV Nevirapine, which is prescribed for PMTCT, is in short supply, he says.

Coulibaly explains that at times ARVs are available in abundance in certain health centres but in short supply in others, pointing to a distribution problem. At the Ministry of Health, he adds, a revamp of the government pharmacy is underway to improve ARV distribution. This will help mothers like Asseman and Bahi stay on treatment and healthy.

*Not their real names