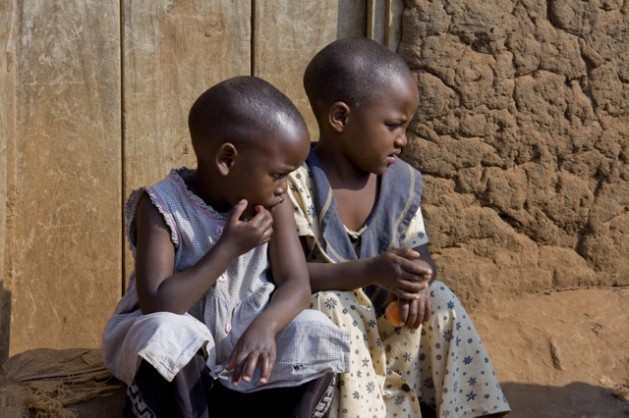 Thousands of Ivorian children were separated from their parents during the post-election violence in 2011. Credit: Kristin Palitza/IPS

ABIDJAN, May 21 2012 (IPS) - Thousands of people suffered rape, torture and other violence during the post- electoral crisis in Côte d’Ivoire beginning in December 2010. But many survivors of rights violations have been afraid to seek justice for fear of reprisals by the perpetrators. An initiative by the International Federation of Human Rights aims to support 75 such victims as they bring their cases to court.

Bertrand Koué*, 34, fled the western city of Duékoué, in the west of the country, two days after the arrival of pro-Ouattara forces. “When the soldiers reached our house, they seized my wife and my two children. They couldn’t find me, so they executed my family while I was hiding in the bush not far away,” he said.

“Friends tell me these same men are still around. I can’t go back there. But I hope that we will meet again – in front of a tribunal, to explain ourselves.”

Twenty-seven-year-old Fatim Konaté* accompanied her aunt to the Abobo market in the northern part of the Ivorian economic capital, Abidjan, one March morning. “Five minutes after we passed a group of (pro-Gbagbo) soldiers stationed around a tank, a shell landed, then a second exploded just a few metres from us. My aunt was hit and died on the spot,” recalls Konaté, in tears.

A preliminary investigation found that the shell was fired from a tank that day, killing a dozen people. The tank’s crew were arrested in July 2011.

Konaté still remembers the faces of the highly-strung soldiers, who threatened passersby. “The soldiers told everyone who passed that they would get us,” she told IPS.

More than a year after the event, she says she is finally ready to testify against the killers who she is confident she can identify. “For fear of being killed, I didn’t appear before the National Commission of Inquiry. But now, I’m ready to come forward to tell the truth to help bring about lasting peace,” she said.

Konaté and Koué are among the many victims of grave violations of human rights committed during the 2010-2011 post-election crisis who have remained silent for fear of reprisals, or out of a lack of confidence in the justice system.

The three organisations say they are supporting legal action in order to contribute to the process of truth, justice and reconciliation undertaken by this West African country, which has been devastated and divided by a decade of political and military crises. A collective of lawyers from these organisations will argue the plaintiffs’ case.

“The objective of this legal action is to help the victims contribute to justice in Côte d’Ivoire, and to put victims at the heart of this process,” said Patrick Baudouin, coordinator of the legal action group of FIDH.

According to FIDH, the cases deal mostly with summary executions, the murder of family members, rape or other sexual crimes, acts of torture, looting and the destruction of homes and property.

Losséni Fofana*, 26, watched from his shack near the Yopougon-Koweit mosque in the west of Abidjan as young pro-Gbagbo militia desecrated the place of worship before slaughtering four people who were inside. When the killers spotted him, they beat him savagely before leaving him in front of his door.

“They thought I was dead,” he told IPS. “I bled profusely until my neighbours came and took me to the hospital. Since then, I’ve prayed that these people will pay for their crimes.”

Marcelline Kouamé*, 48, said she was raped at Guiglo (in the west). “Because I lived not far from a soldier’s house, when the pro-Ouattara forces arrived, they pounced on me. In front of my children, they beat me and pushed me around before raping me. When I remember it, I feel sick to my stomach,” she said.

“Above all, the goal is to understand what has happened,” said René Hokou Legré, president of LIDHO. “Beyond this, we want to see the rights of victims asserted so that we can keep atrocities of this kind from ever taking place again. That is why we have included only those who can identify their tormentors.”

“The victims feared retaliation, and they feared not having their cases heard in a fair legal system. We have reassured them on both counts and for those who would like to enter a witness protection programme, this will be the responsibility of the authorities. We feel that if anything happens to even one of them now… well, certain things will become clear,” Legré told IPS.

According to Karim Ouattara, a special advisor to the president of the Commission for Dialogue, Truth and Reconciliation, justice for victims is essential to prevent impunity for such crimes having negative consequences in the future.

“Côte d’Ivoire needs reconciliation, but it also needs truth and justice. So if there is an initiative that allows victims to express themselves, we also need the guilty parties to accept their guilt. It is this, taken together, which will form the body of a true peace,” he said.

Meanwhile the National Commission charged with inquiring into post-electoral violence continues its work. Its mandate was extended in February to allow it to complete an impartial and exhaustive inquiry into the crimes committed by all parties to the conflict.

*The names of the victims have been changed for their safety.