ABIDJAN, Sep 13 2011 (IPS) - Between now and 2012, the Côte d’Ivoire government plans to establish a scrap metal processing industry that will supply finished products to domestic and regional markets. It is unwelcome news for the country’s existing scrap dealers. 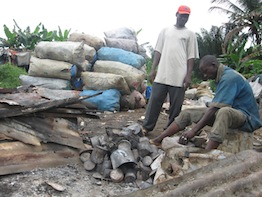 According to the industry’s own association, Côte d’Ivoire presently exports an estimated 100,000 tonnes of scrap metal each year, employing 226,000 people and earning around 24 million dollars in taxes for the government. The finance ministry says the sector contributes 3.5 percent to the country’s gross domestic product.

The government wants to increase revenue from the sector. Michel Koné, [a tax inspector] at the finance ministry, says reorganisation of the industry will produce added value, create new jobs, and generate additional revenue.

In preparation for the launch of its new strategy, the government has suspended exports of scrap metal putting collectors, vendors and exporters in turmoil.

“In August 2009, the customs authorities imposed a tax of 100,000 CFA (around 200 dollars) per tonne on the exports of scrap. Now two years later, they’ve decided to suspend exports. Clearly, there is a desire to discourage us from conducting our business,” said a bitter Mory Kamara, a 47-year-old scrap dealer in Adjamé, a neighbourhood in the heart of Abidjan, the Ivorian economic capital.

“But we know that all of this has no point other than to ensure a monopoly for some big operator. Yet for more than a decade, no one has been interested in this sector,” he told IPS.

“We don’t think that the government can do it without us. Even if that was possible, the government must think about how to support scrap dealers who have invested their own resources in this business,” said Kalifa Doumbia, president of the Association of Scrap Dealers of Côte d’Ivoire, based in Abidjan.

But Koné rejects these allegations as unfounded, explaining that the tax on exports of scrap has proved ineffective and has earned very little for the government. According to him, the sector could bring in twice as much tax revenue, if it were better organised.

Doumbia points out that the scrap dealers have already suffered damages due to the recent political crisis, collectively absorbing losses he estimates at around 18 million dollars. He says some 10,000 tonnes of scrap are still stranded on the quays at the port in Abidjan, waiting to be exported to Europe and Asia.

“We need a moratorium of at least three months to clear this stock,” pleaded Brahima Fofana, also from the scrap dealers association. “This would allow us some relief… we are going to wait for more than a year to resume businesses. Many families are going to experience real hardship during this period,” he told IPS.

Amidst the deafening sound of metalwork In Marcory, an area in the south of Abidjan, Issouf Diakité, 43, explained to IPS that the suspension of metal exports will cost him dearly. “I have to fill an order for 500 tonnes of scrap from India and Pakistan. I had amassed 300 tonnes when this decision was taken. Now I’m facing an enormous loss of earnings.”

He calculates his losses at around 40,000 dollars. According to Diakité, the suspension has also led 103 of the collectors who brought him scrap to abandon the trade. “They are no longer motivated to come to work. But this is an activity which allowed them to provide for the daily needs of their many dependents,” he said.

Adjacent to Diakité’s premises is Amidou Sylla’s workshop, but the doors are closed. “I prefer to close down since there’s no longer any use going out into the city in search of scrap,” the 39-year-old told IPS.

“This decision has sounded the death knell for our business. When you go around the different areas where scrap merchants operate, everyone has lost their smiles,” Fofana told IPS. But, he said, some have understood the need to quickly take up other lines of work. “They have become blacksmiths and are making kitchen utensils, agricultural implements and other things.”

With a halt called on exports, some fear uncollected scrap metal will begin to accumulate in the streets. “By collecting scrap, this sector also prevents pollution of the environment. If that slows, there will soon be piles of waste,” said Fofana.