ABIDJAN, Sep 30 2011 (IPS) - Sea levels on the coasts of Côte d’Ivoire and other West African countries have risen again this year, devastating houses and other infrastructure. The search for effective solutions is lagging behind accelerating coastal erosion. 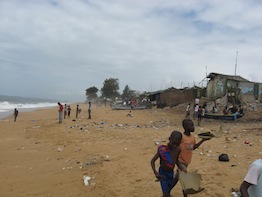 Sea levels on the coasts of Côte d'Ivoire and other West African countries have risen again this year, devastating houses and other infrastructure. Credit: Fulgence Zamblé/IPS

For several years now, the third quarter of each year has brought extraordinarily high sea levels in the Gulf of Guinea.

In the Ivorian economic capital, Abidjan, a number of houses were destroyed and dozens of families made homeless in late August. The challenge is not limited to urban areas: not far from Abidjan, the artisanal fishing community at Grand-Bassam has lost valuable equipment, crippling livelihoods.

The Mauritanian capital, Nouakchott, has experienced extensive flooding – by some estimates, 80 percent of the city could be waterlogged by 2020.

Thousands of kilometres south and east along the coast, the city of Cotonou, Benin’s economic centre, is also battling against erosion. A critical article published in Beninois daily Nouvelle Expression in September asked if the government had given up the fight to save the coastline, documenting the submersion of parts of the Roi de Langouste Hotel, east of the city.

The West African coastline is retreating on average by one or two metres a year; but, aggravated by human activity, in some places it is eroding by several hundred metres a year. This erosion threatens valuable infrastructure such as roads, houses and jetties - and with melting polar ice pushing sea levels up by as much as a metre by 2100, the situation is expected to get worse.

The options are to retreat, accommodate or protect, according to Dr Isabelle Niang, Regional Coordinator of the Adaptation to Climate Change in Coastal zones of West Africa project.

Niang steers a Global Environment Facility project that covers Mauritania, Senegal, Gambia, Guinea- Bissau and Cape Verde. The project has established pilot programmes that involve local - especially youth and women - in restoring mangrove and other forests, as well as training officials to monitor and understand evolving changes of the coast.


A project is under way to construct seven new breakwaters – barriers known as groynes, which extend into the water perpendicular to the shore – in and around Cotonou, as well as the rehabilitation of the existing barrier at Siafato, which will have its length increased from 220 to 260 metres.

Climate change-induced rises in sea levels are part of the problem, but other activities such as unregulated sand mining and the destruction of coastal mangrove forests have also played a role throughout the region.

In Côte d’Ivoire, specialists say what is needed is to reopen the mouth of the Comoé River. The Comoé, 813 kilometres long, rises between the cities of Banfora and Bobo-Dioulasso in western Burkina Faso, and flows through Côte d’Ivoire from north to south before reaching the Ebrié Lagoon not far from Abidjan.

The lagoon, which stretches for more than 100 kilometres along the coastline, is open to the sea only by means of an artificial channel, the Vridi Canal, built in 1950 to allow Abidjan to become a deep-water port. Water from the Comoé has also periodically emptied into the sea a few kilometres to the east, near Grand-Bassam, but this natural outlet is now blocked by silt from the river.

“We have 500 kilometres of coastline being eaten at by the sea, in some places receding by as much as two or three metres per year. And the sea is gaining ground,” says Cédric Lombardo, an environmental expert based in Abidjan who worked on this question for the Ivorian government for five decades.

Lombardo says the closure of the river’s natural mouth by accumulating sediment has had serious consequences. The estuary of the Comoé receives heavy deposits of silt from the river, varying between 60 and 100 centimetres per year. These deposits should reinforce natural barriers protecting the coast from erosion, but the blocked channel prevents this.

The Grand-Bassam channel has been artificially re-opened four times, most recently in 2004, only to fill up again almost immediately.

Lombardo believes that an operation to reopen the river mouth, which will cost an estimated 30 million dollars, will need to create access from the Comoé River to the lagoon, and then into the sea, in order to allow silt from the river to stabilise the shoreline. In addition to the opening of a new channel for the river, levees will need to be constructed.

He suggests an alternative solution would be the construction of a canal which would also allow the deposit of sediments from the Comoé.

“These are the options,” agrees Abidjan-based environmentalist Frédéric Kouamé. “But it remains to be seen if they will work as long-term solutions, and without having negative consequences in the short term. Because generally, the solutions that have been put forward are only temporary.”

Kouamé recalls the construction of artificial dunes to protect the coast a decade ago, all of which have since collapsed under pressure from the sea. He added that the effects of climate change, particularly the rise in sea levels, will only aggravate the erosion of West Africa’s coast.

The International Union for the Conservation of Nature (IUCN) has also observed that the responses put forward by governments and others will likely have the effect of only slowing or displacing a process of erosion that is expected to intensify.

The IUCN stressed the need to find more sustainable answers in a presentation to a meeting of environment ministers from across West Africa held in May this year in Dakar, Senegal. At the same meeting, eleven coastal countries, from Mauritania in the west to Benin in the east, agreed on the establishment of a West African coastal observatory to reduce the risks linked to marine erosion.

These governments also acknowledged that the most effective means of stabilising the coastline include the protection and extension of natural infrastructure, such as mangroves, coastal dunes and lagoons.