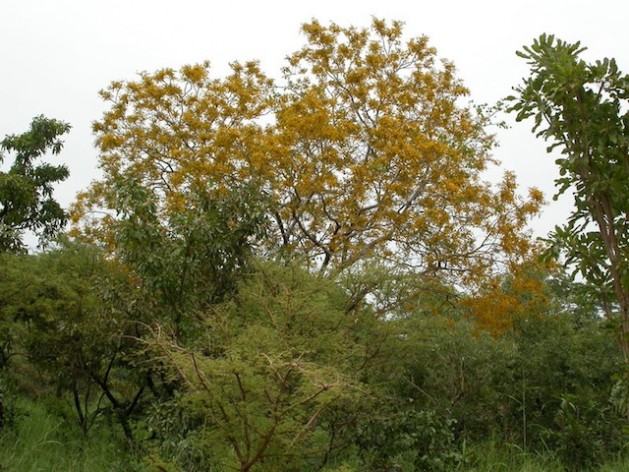 There is a ban on exporting Pterocarpus erinaceus but various traders, with the complicity of officials in the Ministry of Water and Forestry, have continued to exploit the species. Credit: Marko Schmidt/Wikkicommons

ABIDJAN, Feb 24 2012 (IPS) - Environmental groups in Côte d’Ivoire say the illegal logging and sale of wood from the African gum tree is exposing the north of the country to the encroaching desert. The NGOs are calling on the authorities to take firmer action against the illicit timber traders – who allegedly include government officials.


The warning comes as a scandal centring on the seizure of 30 containers of wood sized at two of the country’s ports rocks the Ministry of Water and Forestry.

It centres on the seizure of 30 containers of timber at the country’s two principal ports of San Pedro, and in Abidjan, the economic capital.

The director of the ministry, Yamani Soro, and his executive assistant, Maméry Koné, have both been implicated. The two men were fingered by exporters for having facilitated the transportation of African gum from the north to the south. Police also interviewed and subsequently charged Captain Vassiriki Koné, responsible for inspecting raw timber exports from San Pedro.

Soro was suspended from his duties, while Koné was arrested before being released for lack of sufficient evidence.

Sources close to Koné say he was released because the evidence against him was contradictory, suggesting he is not guilty of any infraction.

The timber in question was African gum – Pterocarpus erinaceus, known locally as vène – which is an important component of the northern forests which border on the savanna in Côte d’Ivoire and elsewhere in West Africa.

“Vène makes up more than 80 percent of the forest cover north of the 8th parallel. This is the greenery found at the very gates of the desert. If it is destroyed, then all of the north will be exposed to dryness and famine,” said Jacob N’Zi, executive secretary of the Groupe Ecologique de Côte d’Ivoire, a non-governmental organisation based in Abidjan.

According to N’Zi, there is a long-standing ban on hunting in these northern forests, as well as on exports of raw African gum timber, in order to preserve the ecosystem’s balance. Yet various traders, with the complicity of officials in the Ministry of Water and Forestry, have continued to exploit the species.

The African gum reaches a height of between 10 and 12 metres and is covered with vivid yellow flowers in the dry season. Its leaves and fruit – shaped like a garlic clove – are a nutritious animal feed, while both leaves and bark are used for a range of medicinal purposes. The tree produces a red sap which is used as a dye for fabric and is also useful as a nitrogen fixer, improving the presence of nutrients in impoverished soil.

P. erinaceus, which has become very rare according to scientists, is also used as fuel – producing a high quality charcoal.

“In the north of Côte d’Ivoire, which is threatened by desertification, people rely on farming and herding livestock for their livelihoods. If they lose the key resources needed for their survival, it will have dramatic consequences,” Souleymane Camara, an agronomist based in northwestern town of Séguéla, told IPS.

Côte d’Ivoire, which had 16 million hectares of forest in the 1960s, had only around three million hectares left by 2010, thanks to decades of wholesale, anarchic clearing of forests, according to the ministry.

In light of the profits to be made an continuing destruction of forests, environmentalists are not satisfied with the handling of the current scandal involving forestry officials.

“The decisions (taken) fall far short of reassuring us,” said Blaise Gnakala, an environmental activist in Abidjan. “In the end, the matter has been treated lightly. The seized wood will soon be sold without the truth coming out.

“There was a chain of responsibility, and for us, it is the chance to send a strong signal to those digging a grave for Ivorian forests, but it’s been missed.”

But, Clément Nabo, the Minister for Water and Forestry, says the scandal will be thoroughly investigated. According to the ministry, the wood seized will be auctioned with the proceeds handed over to the government.

But Gnakala believes that the prosecution of those indicted, along with all their accomplices, should mark a decisive step in the struggle against desertification. “If the scandal is allowed to blow over, it will pave the way for the stripping of rare trees from our forests,” he said.

In 2007, several Ivorian ecological organisations asked the government to grant them a role in the management of the country’s forests to better prevent abuses. NGOs say there has been no response – apparently due to the various political crises that have gripped the country, and the lengthy preparations for presidential elections that were eventually held at the end of 2010.