CAPE TOWN, Jan 25 2012 (IPS) - When a food crisis hits the continent, African countries tend to look to the international donor community to mobilise aid. But a fast-growing, drought- resistant tree with extremely nutritious leaves could help poor, arid nations to fight food insecurity and malnutrition on their own. 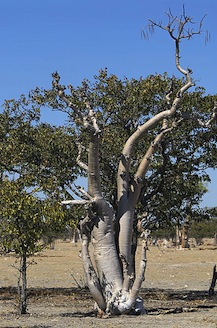 A Moringa tree in fruit, near Sprokieswoud in Namiba. Moringa leaves are dubbed a "super food". Credit: Hans Hillewaert/Wikkicommons

A 15-hectare plantation of the “miracle tree” with the botanical name Moringa oleifera has already started to make a positive change in the rural village of Tooseng, which is located in one of South Africa’s poorest provinces, Limpopo.

Moringa leaves are dubbed a “super food” because scientists found that they contain the calcium equivalent of four glasses of milk, the vitamin C content of seven oranges, the potassium of three bananas, three times the amount of iron found in spinach, four times the amount of vitamin A found in a carrot and twice the amount of protein in milk. It is like a supermarket on a tree.

Mavis Mathabatha, a former school teacher from Tooseng, has been working hard to set up a Moringa farm over the past three years that will produce enough leaves to make a positive difference in her community and further afield. “I want to make an impact in my area, province and across the country through this project,” she explains.

In 2009, she started harvesting, drying und grinding Moringa leaves from the first few trees she had planted, to sprinkle them on the meals provided to about 400 poor children at the local Sedikong sa Lerato (meaning “Circle of Love” in Sesotho) drop-in centre.

The centre feeds children from households with a combined income of less than 250 dollars a month, which includes practically all boys and girls in Tooseng, a community suffering from high rates of unemployment, poverty, food insecurity and low diet-diversity, malnutrition and HIV-infection.

“The results were visible almost immediately. The health of the children improved in a short period of time,” says Elizabeth Serogole, the drop-in centre’s manager who works closely with Mathabatha. She says many children had been showing signs of malnutrition, like open sores on their skins, which started to heal soon after the children regularly ate the leaves.

Supplementing their meals with Moringa also notably increased children’s ability to ward off new illness and infection and boosted their mental development, Serogole adds: “Most can now better concentrate at school.” All it needed was one teaspoon of leaf powder a day.

“The Moringa plant is unique in that every part can be utilised for beneficial purposes. It has medicinal, therapeutic, nutritive and practical uses. It is extremely effective in combating malnutrition,” says Tesfay. In addition, Moringa’s immature pods were full of essential amino acids.

Moringa leaves can also be used for medicinal purposes, to treat skin infections, lower blood pressure and blood sugar, reduce swelling, heal gastric ulcers and to calm the nervous system, Tesfay further explains. The plant, which is native to northern India, has been used in Ayurveda medicine for centuries and is said to prevent 300 diseases.

Moreover, the seeds of the tree can be used to purify water in rural areas where access to clean drinking water is difficult and often a cause for disease. “The seeds are effective in removing about 98 percent of impurities and microbes from contaminated water,” says Tesfay.

The slender tree with drooping branches is non-invasive, needs little water and grows fast, reaching a height of three metres within a year. It even grows steadily in Tooseng, in South Africa’s northeast, an arid region that has been suffering from repeated lack of rainfall in recent years.

“The tree can survive in relatively unfavourable conditions and does not require sophisticated and expensive farming methods or inputs,” explains Tesfay.

Moringa could thus indeed become a widely used hunger prevention method, food experts say, as it can grow in all of the world’s subtropical areas, where droughts and malnutrition are prevalent – in most parts of Africa, Central and South America, the Middle East and South-East Asia.

Since 2009, Mathabatha has built up her Moringa plantation little by little. After she heard about the multiple benefits of the tree, she applied for a grant from regional funding agency Southern Africa Trust, which help her to set up her own plantation. Today, she is the proud owner of 13,000 Moringa trees.

But Mathabatha did not stop here. She wanted to share her discovery of Moringa’s nutritious benefits with others and has therefore distributed more than 6,000 Moringa seedlings to poor families in various communities around Tooseng, together with a nutrition education campaign.

“Planting and distributing Moringa is a holistic approach to deal with the problem of food insecurity,” Ashley Green-Thompson, who managed the project grant, explains why the SAT decided to finance the project. “The level of household food insecurity is one of the key indicators of poverty, and it’s very high in this region.”

Today, Mathabatha’s farm produces and packages up to 10,000 tonnes a year of Moringa leaf powder, which is distributed not only within South Africa, but also exported to Botswana, Swaziland and Lesotho. “I am hoping to further extend my market in the next few years. There is a lot of interest in my product,” Mathabatha says.

But it is the urge to help much more than the desire to make money that motivates Mathabatha to expand her business. At the cost 60 cents per 40 grams of leaf powder – which lasts one person for about a month – the 52-year-old business woman puts affordability clearly before profits.