Moving Towards a Food-Secure Ghana 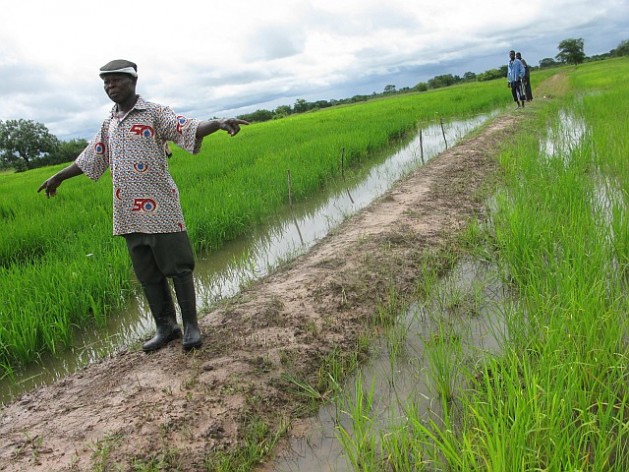 TAMALE, Ghana, Dec 21 2011 (IPS) - In Dundo village in Nyankpala district, Northern Ghana, 10 women are busy weeding a rice field on a piece of land donated to them by the village chief.

Fusiena Idrisso, a mother of seven, works hard at managing her crop because she is looking forward to the profit she will earn from her next harvest. Last season, she earned 200 dollars.

“I have never earned this kind of money in my entire life,” said Idrisso.

Since she was married 14 years ago, Idrisso has mostly been a housewife and would sometimes work as a day labourer on other people’s farms, earning an average daily wage of a little more than a dollar.

But thanks to an innovative farming system introduced by the government, people like Idrisso are being allocated pieces of unused farmland and are provided with farm inputs and the technical support to show them how to farm correctly.

Known as the Breadbasket Initiative, the government, with support from the Alliance for Green Revolution in Africa (AGRA), temporarily acquires unused land from individual landowners and makes it available to mainly the country’s youth and women. So far it has proved a success. The first harvest from the initiative in August almost doubled Northern Ghana’s maize and rice yields.

“The government is in the process of quantifying the proceeds and comparing it with previous harvests made in general all over the country so as to find out the percentage of improvement,” Joseph Faalong, the Director of Agriculture in Northern Ghana, told IPS

“But from observation, I can confidently say that maize and rice yields in Northern Ghana have more than doubled following the initiative.”

According to Dr. Wilson Dogbe, the Head of the Rice Program at the Savannah Agricultural Research Institute in Northern Ghana, the region remains a high potential area for food production despite extreme climatic conditions here, which includes droughts and floods.

“Communities living within the Libi Valley near Lake Volta in the northern region usually take advantage of the flood water to make rice paddies for production of the grain that is one of the main staple foods in Ghana,” he told IPS.

The initiative is a simple system of not letting land go to waste. People who have unused pieces of land are persuaded through local administration officers to volunteer it to be used by interested community members.

A landowner can also choose to be involved in the initiative and farm their own land, but if they decide not to, the rental of land is paid in kind from the harvest.

Once a farm “block” is formed, it is registered with the Ministry of Food and Agriculture and the government provides tractor services to communities for land preparation, certified and improved seed, fertilisers and other farm inputs, and technical support through extension officers.

These services, however, are not free. After their crop is harvested, the farmers have to pay the government back in kind.

“Most of the items provided by the government come with a subsidy to ensure that poor farmers can afford them as a means of improving food security for the country,” said Faalong.

The programme aims to improve the livelihoods of 250,000 smallholder farmers by equipping them with adequate skills.

“In Northern Ghana alone, we have about 60 block farms of different sizes ranging from seven acres to 32 hectares with varying memberships. But in total, the northern region has 15,722 farmers growing different priority crops that include rice, sorghum, maize and soybeans,” said Faalong.

“Using funds from the Danish International Development Agency, through AGRA, the government has embarked on training programmes for farmers. We focus especially on improved farming techniques and the use of appropriate farm inputs in correct quantities and at the right time,” said Faalong.

According to Idrisso, her group harvested 120 80-kilogramme bags of highland rice last season.

“Among the 10 members of the block, each one of us was given 10 bags and the remaining 20 bags were given to the ministry as payment in kind for the services and farm inputs,” she told IPS through a translator.

All 10 members of Idrisso’s group are women, all of whom have no formal education.

“We keep monitoring them to ensure that they are doing the right thing at the right time,” said Dogbe of the farmers involved in the project.

So far, demonstration sites have been established in 16 districts in Northern Ghana.

“We use these sites as evidence-based training grounds for the farmers – most of who have either limited education, or are completely illiterate,” said Faalong.

“I have always farmed rice, but there are several things I am now learning that I never knew. And looking at the rice in the demo areas, there is a clear contrast when compared to rice out of the demo plots,” said Lukmanu Whumbi, a resident of Isgunja district in Northern Ghana.

Whumbi told IPS that because of the training programme he now understands why he has always had a low yield from his eight-hectare piece of land.

The Ministry of Food and Agriculture is partnering with commercial companies, which will buy the harvested grain from farmers in bulk at a pre-negotiated price.