Progress Towards a Food-Secure Africa

NAIROBI, Jan 20 2012 (IPS) - A growing number of African countries are making significant progress towards eradicating extreme hunger and poverty. Ghana, Liberia, Malawi, Rwanda, Sierra Leone and South Africa are some of the countries that have made tremendous achievements towards achieving these goals. 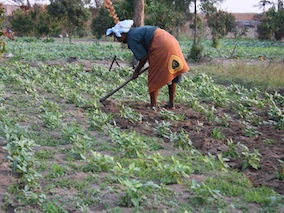 This has been reflected in a hunger-free score card geared towards measuring food security in Africa by ActionAid International, a non-governmental organisation that works towards a world without poverty and also in research by ACORD, the Association for Cooperative Operations Research and Development, which is an authority on food security in Africa.

In Ghana over the last 15 years the number of food insecure people has significantly decreased from 34 percent to eight percent. The country’s school feeding programme reaches one million children, according to data from this West African nation’s Ministry of Agriculture.

Since the decade-long civil war ended in 2002, Sierra Leone has dramatically increased its arable land to nearly 1.8 million hectares, consequently reducing the number of people going hungry by nearly 10 percent, also according to data by the country’s Ministry of Agriculture.

Agriculture, in many African countries, is the bedrock of Rwanda’s economy. According to the country’s Ministry of Agriculture and Animal Resources, the sector generates 45 percent of export revenue and accounts for an estimated 90 percent of all food consumed.

George Nderi, a market analyst in Nairobi, explained: “In the last five years, Rwanda’s agricultural sector has been growing at an average of 4.5 percent, contributing an estimated 36 percent to the overall GDP, the highest in East Africa.”

He said that both Kenya and Uganda’s agricultural sectors contributed an estimated 24 percent to the country’s GDP, with Tanzania contributing 25 percent.

According to the World Bank, Rwanda’s economy is growing at a healthy rate of 7.8 percent, at least two points ahead of the East African Community.

According to the 2011 Ethiopian Demographic and Health Survey, deaths of children under the age of five stood at 20 percent in 1990 but have fallen to 8.8 percent. Malnutrition accounts for at least half of these deaths according to the World Health Organization.

Amos Kiptanui, a small-scale farmer in Kenya’s Rift Valley Province, which is also known as the country’s breadbasket, said that these positive steps have been as a result of financial and political commitment to eradicate hunger and malnutrition.

“Rwanda was the first country in Africa to sign on to the Comprehensive Africa Agricultural Development Programme (CAADP). The country has also doubled its expenditure on agriculture to the current 10 percent meeting the CAADP policy framework,” he said.

CAADP requires that countries signatory to the agreement allocate at least 10 percent of their national budgets to agriculture.

“African countries that have made progress to sufficiently feed their people have done so by mainly investing in small-scale farmers who account for more than 90 percent of Africa’s agricultural production,” Nancy Mumbi, an agricultural researcher and extension officer in Kenya’s Central Province, said.

She added that in 2011, Rwanda’s government committed an extra five million dollars to the agricultural sector.

“With an agricultural budget of at least 112 million dollars, these resources continue to benefit Rwandan farmers through subsidising inputs such as fertilisers and providing training in modern technologies that can improve production. In fact, there has been a government programme to boost the use of agriculture,” Numbi said.

Other countries that have improved their budgetary allocations to agriculture are Sierra Leone, Kenya and Malawi.

Since 2005, Malawi has strived to allocate at least 10 percent of its national budget to agriculture. Kenya’s budgetary allocation to agriculture has leaped from a paltry four percent in the previous financial year to the current nine percent. It remains one percentage point shy of meeting the CAADP policy framework.

Ghana’s food security success has been attributed to the country’s long-term commitment to agriculture.

“Just like in Rwanda, there’s a national fertiliser subsidy project in Ghana that enables farmers to restore exhausted soil resulting from poor management of arable lands making them incapable of supporting the growth of crops,” Mumbi said.

“Countries that have improved food security levels are those that have protected land from degradation caused by various factors such as over-use of inorganic chemicals, bush fires, deforestation and over grazing.”

In Kenya, the degradation of the Mau Forest caused severe climatic changes that resulted in reduced rainfall, which affected farming in the Rift Valley Province and consequently caused a food shortage.

The Mau Forest is the country’s largest carbon reservoir and largest water tower. The forest is also responsible for flood mitigation and water storage, and reduces soil erosion. The country has embarked on a massive campaign to restore the forest and to create a ripple effect that will improve food security in the region.

Senegal has been working on an ambitious plan to achieve food sufficiency by 2015. The country is providing farmers with subsidised seed and fertiliser inputs. It also supports a food security and child nutrition programme that aims to improve the nutrition of children under five years, and pregnant and nursing women.

Other countries that are making tangible steps to be food secure include Algeria Morocco, Egypt , Tunisia, Botswana and Gabon.

Although the increasing number of countries significantly fighting hunger is a step in the right direction, much more needs to be done as Ousainou Ngum, the executive director of ACORD.

“African countries must realign their investment policies to focus on agriculture and food production. The food crisis facing the continent is because of incoherent policies. If leaders do not coordinate their policies well, millions of Africans will continue to starve due to food shortages,

“Our leaders must create investments that are conducive to agricultural sector, with a bias towards small scale farmers, women and pastoralists. At least 270 million Africans out of the continent’s population of 800 million were suffering from hunger. To address this, strategies to increase food production on the continent must also address security to land tenure and better access to markets.”