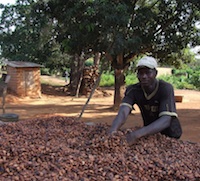 Ivorian cocoa producers are keeping their harvests on the farm due to European Union sanctions. Credit: Fulgence Zamblé/IPS

Producers say not only are they selling their perishable crop to black market buyers for a fraction of its market value, but they are being unfairly victimised by the political situation.

A key part of the struggle for power is control over state revenues. The European Union suspended imports of cocoa, Côte d’Ivoire’s major export, as a means of depriving Gbagbo of funds. The country’s cocoa producers say the sanctions have only resulted in their harvests going to neighbouring countries, even to non-producing countries.

By mid-February, according to the Bourse café-cocoa, (BCC, the country’s cocoa and coffee exchange), 400,000 tonnes of cocoa were blocked at the country’s two ports – Abidjan and San Pedro – while waiting to be exported to European countries.

“Every day that goes by, this cocoa is more vulnerable to spoilage. This represents an enormous potential loss of earnings of close to 40 billion CFA francs (around 80 million dollars) looming on the horizon for our producers,” says Adrien Kouamé, an exporter from the consolidated cooperatives from the west of the Côte d’Ivoire.

Forces loyal to Gbagbo attacked districts dominated by supporters of his rival, Laurent Ouattara, in the economic capital Abidjan over the weekend - for the first time using helicopters in an effort to take controls of areas like Abobo.

Ouattara, who is recognised by the international community as the winner of the disputed Nov. 28 election, had left Abidjan's Golf Hotel for the first time to attend a meeting of the African Union's Peace and Security Council in Addis Ababa.


“As a simple producer from Duékoué (in the west of the country), what have I got to do with politics so that people refuse to buy my 35 tonnes?” said Blandine Gloudoueu. “I make only 25 million CFA francs (around 50,000 dollars) to support my family of 20. So how am I going to cope with this embargo?”

In addition to bearing the brunt of the European sanctions, Ivorian cocoa producers are up in arms over the outflow of their products into adjacent countries, notably Mali, Burkina Faso and Togo.

“It’s hard for us to hear that countries like Mali have declared a production yield of 100,000 tonnes of cocoa, when in 2004, it was only 8,000 tonnes. That Mali reports a 100,000-tonne cocoa yield is staggering,” said Joseph Kouamé Yao, president of the agricultural union of individual and cooperative growers of Côte d’Ivoire.

The BCC estimates that 170,000 tonnes of cocoa have left Ivorian soil illegally to be sold through adjacent countries, representing an estimated loss of about 34 million dollars.

According to Yao, in the last few weeks, rogue traders have been scouring the cocoa-producing regions to buy stock at the lowest price before transporting it along back roads and selling it in the bordering countries.

But the situation is also benefiting Ghana, Côte d’Ivoire’s eastern neighbour and main competitor, with an annual cocoa yield of 800,000 tonnes, explains Yao. Ivorian producers maintain that some 29,000 tonnes of cocoa have been able to reach Ghana illegally.

“With the crisis, people are offering to buy cocoa for 500 FCA francs (about one dollar) or even 450 FCA francs, whereas the off-the-field price declared by the government for the current crop year is 1,100 CFA francs ($2.20),” Arouna Singo, a cocoa producer from Vavoua in the mid-west of the country, told IPS. “Some of us give in to the pressure, even though it’s practically less than half its real value.”

Karim Soumahoro is a buyer from San Pedro, in the south-west of the country. “We are in a situation where we risk losing our investments. Those who dupe the producers claim that they cannot buy at the normal prices because their purchases may be stopped at customs as they are leaving the country, or they won’t able to find other exporters.”

Soumahoro adds that as long as the socio-political situation does not improve, the profiteering will continue, as producers need money desperately and will hand over their harvests to the first taker.

On Feb. 17, Singo, Gloudoueu, Kouamé and a hundred or so other producers were in Abidjan to protest. They burned cocoa beans in front of the EU delegation’s offices, demanding the lifting of sanctions against the country and an end to what they described as economic slavery which the peasant farmers are being forced into.

“We are worried about a veiled genocide that could wipe out the country’s population, in the sense that cocoa constitutes the most essential link in the country’s economy,” says Georges Bléhoué Aka, president of the BCC’s national council of experts.

Bléhoué and other producers condemn the fact that the international community has not imposed any similar sanction on cotton or cashew nuts, produced primarily in the north of the country, while slapping an embargo on coffee and cotton which are produced in the south.

Asked about this via a telephone interview in February, the EU delegation in Abidjan declined to comment.

Côte d’Ivoire produces some 1.2 million tonnes of cocoa annually. Alongside coffee, this represents 48 percent of the country’s operating revenue, according to the Côte d’Ivoire’s customs office, and the direct or indirect source of livelihood for six of the country’s 17 million people.