ABIDJAN, Mar 26 2012 (IPS) - The births of tens of thousands of children during Côte d’Ivoire’s eight-year rebellion were not formally recorded. Providing these children with birth certificates is one of the mundane yet vital challenges facing the authorities as they work to re-establish the country’s public administration. 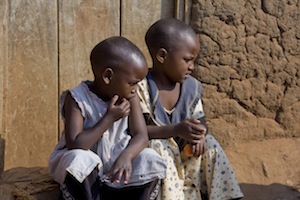 The births of tens of thousands of children during Côte d'Ivoire's eight-year rebellion were not formally recorded. Credit: Kristin Palitza/IPS

While many families take a lax attitude towards registering new babies, the gaps in birth and other records are particularly serious in the central, northern and western parts of Côte d’Ivoire, where government functions were effectively suspended by the rebellion between 2002 and 2010.

As children born during this period move up through the school system, they have run into problems.

Thirteen-year-old Marcellin Kodjané thought that he would not be able to continue with his studies. For two years, he attended classes at the Yopougon-Kouté primary school in the north-western part of Abidjan without sitting for the exams that would allow him to move on to high school.

“I didn’t have a birth certificate. My parents weren’t ignorant, but I was born in a village in the Mankono region (in the north of the country, formerly under rebel control), and it was impossible to go there to get my birth records.

“Despite this, I was registered for school and I learned the curriculum without my documents. But when it comes time for exams, they are necessary. Last year and the year before, I watched my classmates take their exams.

“In my class, there were six of us in the same situation. Finally this year, our teachers told us that the decision had been made that we could also take the exams… but two of us who lacked papers had dropped out.”

The Education Ministry says more than 70,000 pupils registered for the 2011-2012 school year don’t have proper documentation. Yet students will not be allowed to write their primary school certificate exams without producing birth certificates.

“At the end of the year, my eldest child will take exams for his primary school certificate. But he doesn’t have a birth certificate,” said Bernard Kapeu, a retired teacher in the western county of Touleupleu. “During the occupation of the western zone by the former rebels, there was no public administration, so for several years we couldn’t get any documents issued.”

Kapeu has travelled 600 kilometres to Abidjan, the economic capital – for the second time – to try to get substitute birth certificates issued for his three school-aged children, now ten, seven and five years old.

He’ll take advantage of being in Abidjan to collect a pension payment – another sign of the normalisation of administrative functions – but his main task is to apply for the replacement birth certificates. On his return to Touleupleu, he will go to the district headquarters which will issue him civil status records for his children. He expects each certificate will cost 500 CFA francs – roughly one U.S. dollar.

Armand Kangah, a 48-year-old pineapple grower near the town of Maféré, left his fields untended for the day in order to obtain a birth certificate for his five-year-old daughter, who is in her second year of primary school.

The town hall here, 150 kilometres east of Abidjan, has been swamped with requests for substitute birth certificates. More than one in ten of the 11,000 students in the Maféré district lack proper documentation, according to the Education Ministry.

“I was told that this wouldn’t take very long. And it’s reassuring that it’s free of charge, but I admit that I have been irresponsible on this issue,” Kangah told IPS while he waited.

Many parents across the country have failed to get proper documentation for their children for one reason or another.

In Man, in the west, the regional directorate for education says 30,000 of the 160,000 students in primary schools lack vital documents – including 5,000 who expected to take exams this year. In Ferkessedougou, in the north, more than 3,000 of 8,000 students don’t have birth certificates.

Responding to demands from child rights organisations, the Ivorian president, Alassane Ouattara, declared in early February that all students born between September 2002 and 2010 – and those born during the 2010-2011 electoral crisis – could register for their documents at their place of birth at no charge.

“Working in collaboration with the courts and the relevant municipal departments, we were able to facilitate the issuing of birth certificates in a first operation in the Abobo commune (north of Abidjan),”said Djama N’gou, president of the Association for the Promotion of the Right to Education, a non-governmental organisation based in the city. “The main thing is that some parents are not well- informed, and we will have to reach out to them.”

“If the reason births weren’t registered in the north, central and western zones was because there was no functioning administration,” said Martine Akadia, a primary school inspector in Abidjan, “in the south, it’s simply common for many families to neglect registration, as if it were unimportant.”

Despite the announcement that fees for documentation would be waived, many parents continue to drag their feet, said N’gou. “We welcome the multiple and multiform initiatives which are now raising awareness among parents, including some who have only now understood the need for a birth certificate for their children. But we will still stress the importance of door-to-door visits to achieve our objective of zero unrecorded births.”

Proper documentation is not the only challenge facing the country’s education system a year after the post-electoral crisis ended. According to the Ivorian Ministry of Education, the country is short of an estimated 3,000 primary school teachers. And a shortage of classrooms and desks means that in many places, more than 40 students have to be crammed into rooms meant to hold 25.

Yet in the west of the country, due to massive displacement of people into Liberia, many schools have been closed for lack of pupils and now stand abandoned in the bush.