LUANDA, Mar 13 2012 (IPS) - Rights groups and activists are warning of a rapidly deteriorating political climate in Angola following a police raid on a private newspaper and a violent crackdown on anti-government protests. 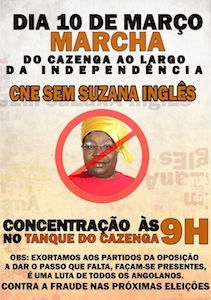 On the morning of Mar. 12, 20 computers were seized from the offices of the outspoken Folha 8, one of Angola’s few remaining private publications that is critical of the government, under a warrant investigating “crimes of outrage against the state” and violations of press freedom.

The effective shut-down of the paper and the questioning of its editor, William Tonet, whose mobile phone battery was also confiscated, comes just 48 hours after attempts by Angolan youths to stage demonstrations in the capital Luanda and southern coastal city of Benguela.

The marches had been convened to protest about irregularities in the electoral process including the appointment of a member of the ruling party to run the National Electoral Commission.

Although only a few dozen people gathered in each city, neither protest was allowed to go ahead.

In Benguela heavily armed police broke up the crowds making several arrests, while in Luanda, where in the days running up to the events there had been reports of house raids, threats against the organisers, an unidentified armed gang launched a violent street attack on the organisers leaving several people seriously injured.

Lisa Rimli, from New York-based lobby group Human Rights Watch, said: “We are especially concerned about what is happening in Angola because this is an election year when people should be allowed to express themselves freely.

“That people are not being allowed to stage public demonstrations, which is their right under the constitution, and that private newspapers are being targeted like this, it is very worrying,” she added.

Rimli said she was most concerned about the type of violence being pursued against the protestors.

“What we saw at the weekend was a step up from previous marches, the attackers were armed and they were aiming for people’s heads,” she said. Adding: “It is very lucky no-one was killed.”

Angola’s Policia Nacional or national police has denounced the violence, blaming the clashes on rival gangs and “hooligans”, and a spokesman pledged a full investigation into what happened.

A leaflet has started circulating in Luanda, claiming to be from a separate youth vigilante group, which says it carried out the attack to stop the protests out of “respect for the elections” and to preserve the peace.

But Luaty Beirão, a popular Angolan rapper who helped organise the march in Luanda, and who was himself struck on the head, said he and his friends had been deliberately targeted by a well-trained undercover security operation.

He told IPS: “As soon as we arrived at the arranged meeting place, we could see a group beating up random people and then they came towards us and tried to encourage us to fight back.

“When we refused to be provoked, they changed their tune and said if we went away and cancelled the demonstration, they would leave us alone.

“We refused again and then they just went for us. I just remember being hit on the head and falling to the ground and then hearing shot after shot being fired into the air.”

Beirão, 30, who needed stitches for his head wound, added: “The police were nowhere to be seen and you could tell just by the way those guys surrounded us, they knew what they were doing, they weren’t just ordinary thugs.”

A few kilometres away, 57-year-old Filomeno Vieira Lopes, the Secretary General of the small opposition party Bloco Democratico who was on his way to join the protest, was also attacked and had to be taken to hospital with a wounds to his head and arm.

Sizaltina Cutaia, from the Angolan office of the Open Society Initiative for Southern Africa, said: “Considering that 2012 is an election year these events are indeed very concerning.

“It indicates to us the low status of political participation in Angola, where freedom of assembly and manifestation are systematically denied to citizens. It is a real threat to democracy.”

Until recently, political protests were rare in Angola where few have dared to criticise the authorities for fear of losing their job or the little stability they had found since the end of the country’s three-decade civil war in 2002.

But in response to what is seen as the government’s failure to share out a peace dividend to the majority, despite the country’s enormous oil wealth, and the weakness of the parliamentary opposition, since March last year youth movements have been taking to the streets.

As well as complaining about inequality and poor public services, the youth have been calling for Angola’s president of 32 years, Jose Eduardo dos Santos, to step down.

Beirão, whose stage names are Brigadeiro Mata Frakus and Ikonoklasta, said: “For us the big issue is Dos Santos, he must go. We want him to step down, 32 years is too long for one man to rule a country.

“The youth is fed up with what is happening here. People can pretend everything is alright but it is not, our country is not being run properly, there is no investment in health or education and many people are suffering.”

Angola is one of Africa’s fastest-growing economies whose GDP is forecast to swell by 12 percent this year.

Half the population, however, remains in poverty with no access to drinking water and the country has one of the highest child mortality rates in the world with one in five youngsters dying before their fifth birthday.

Hitting out at middle class silence and people’s general reluctance to confront government which controls the media and most private enterprise, Beirao, whose late father was a dedicated member of the ruling party, said: “People know things aren’t right, but they are too scared for their own jobs and families to stand up to what is happening.

“But for me, those who remain silent are merely being complicit and contributing to the injustices taking place here.”

Clearly sensitive to the growing tide of anti-government sentiment so close to the elections Dos Santos and his party, the Movement for Popular Liberation of Angola have been trying to turn on the charm offensive.

Dos Santos, for many years a recluse, has been making more regular public appearances, even switching his stiff suit for more casual shirts and caps.

In a string of recent speeches he had denied he is a dictator and has urged Angolans to be patient and recognise what his government has done for the country since the end of the war.

Last week the 69-year-old, whose own family is accused of mass acts of corruption, lashed out at what he called “dishonest propaganda” said people with foreign influences were trying to destabilise the country for their own ends.

Angolan journalist and anti-graft campaigner Rafael Marques, who has a website dedicated to outing corrupt government officials, said Dos Santos was clearly struggling to deal with the new generation who unlike their parents were not shaped by the fear of war or fooled by Soviet-style propaganda.

“Dos Santos is looking weaker by the day,” Marques said. “The fact that he is resorting to violence to suppress his own people shows he is losing his control.”

Beirão said he and fellow members of the protest movement Central 7311 (named after their first demonstration last year) had extensive film and photographic footage of the recent violence and planned to use social media to spread it to as many people as possible in order to raise awareness of their struggle.