LUANDA, Nov 15 2011 (IPS) - Adolfo Andre knows what he wants for his country and says he will fight on until he gets it. 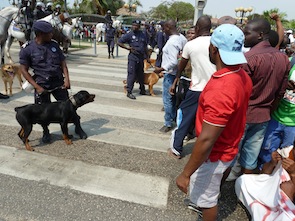 Several dozen protestors square off with police in a demonstration in the capital Luanda. Credit: Louise Redvers/IPS

“What we need is the president to leave power, he’s been there for too many years and it is time for him to go,” he said defiantly.

“When I see my brothers and sisters living in these terrible conditions when the country is so rich yet people are dying of hunger and from not having clean water or medicines, I have to fight for this because I am Angolan.”

The 32-year-old, who was born two weeks before Angola’s President Jose Eduardo dos Santos took office in 1979, is part of a new youth protest movement which emerged in the country at the start of this year.

Partly inspired by the Arab Spring, partly by their own experiences of living abroad, but mostly by what they say is utter frustration about the huge inequalities that divide Angola, the group has no fixed political affiliations and no formal leadership.

Starting off with just a dozen people, their support base has grown rapidly, thanks to social networking sites like Facebook, and in October they mobilised some 700 people to walk down a main street in Luanda carrying placards saying “Down with the dictator” and “32 years is too long”.

Although still small in size, the protests are largely unprecedented in a country where the government controls the media (both state and private) and uses a sophisticated patronage network to ensure critical voices stay muted.

“There are many people in Angola who know things are not right but who rely on the government and the ruling party for their jobs and livelihoods,” Andre, who lived for 15 years as a refugee in South Africa, explained.

“These people are too scared to stand up and challenge what is going on because of what they might lose.

“But the millions of Angolans who have no food, no homes, no jobs and no hope, these are the people we are trying to mobilise, and we believe things are changing, people are starting to question,” he added.

In the past few months there have been a number of protests staged not just in the capital Luanda, but also in other towns and cities, as well as a rush of rare industrial action, at both private and state- owned companies.

Pedro Seabra, a researcher at the Portuguese Institute of International Relations and Security in Lisbon said: “Angola is still a very long way off from any sort of Arab Spring but these protests are very new for Angola and very significant. Things are definitely staring to change.”

According to the United Nation’s recently-released 2011 Human Development Index, Angola ranks 148 out of 187 countries and more than half of the population lives below the poverty line without access to basic services.

Following the death of former Libyan dictator Muammar Gaddafi who spent 42 years in power, Dos Santos now uncomfortably vies with Equatorial Guinea’s Teodoro Obiang for the unenviable title of longest-serving president in Africa. After decades of unquestioned rule, the 69-year-old is rapidly becoming a hated figure.

“Every member of the Dos Santos clan is rich and his daughters are some of the richest women in Africa,” said Makuta Nkondo, a member of parliament for the main opposition party UNITA (Union for Total Independence of Angola).

“On top of that all the members of the government are rich, and this wealth is scandalous when the people of Angola don’t have water, electricity, health services or decent education.”

But standing up to the Angolan authorities comes with a cost.

Andre, who has experiences in construction and banking and speaks fluent English, said he has been unable to find work since moving back to Angola in January and many of those who have taken part in the demonstrations have also lost their jobs.

“It has made my life a bit difficult and it’s put me in danger,” he said. “The security services follow us all the time, wherever we go they know where we are. There’s nowhere to hide from them, they are everywhere, always listening and watching.”

In September Andre was among several dozen protestors who were arrested for taking part in a demonstration in the capital Luanda. He spent over six weeks in jail before his sentence (for public order offences) was mysteriously overturned by the Supreme Court.

Days earlier he claims the group were approached by a top general and offered cars and money to call off their action.

“When we refused the gifts,” he told IPS, “The guy said ‘you’ll see how the fire burns’, and a few days later at the protest we were arrested and badly beaten by the police.

“My family are worried for me, of course, I have a young son and my girlfriend is currently pregnant, so it is a concern but I am also not scared of these people.”

However after an initially heavy-handed response to the protests, the government has changed tack, condemning the youth as insubordinate and accusing them of wanting to re-start the civil war.

Meanwhile for every anti-government protest that is organised, the ruling MPLA (Popular Movement for the Liberation of Angola) stages several of its own events, bussing people into city centres, giving them t-shirts, putting on concerts and calling for the country to work together to preserve peace rather than sow division.

And not only is the state media propaganda machine working overtime, highlighting every government project and success and pledging to improve energy and water supplies, Dos Santos, in his annual State of the Nation address in October, took pains to deny he was a dictator.

“There is no dictatorship here whatsoever,” Dos Santos said. “On the contrary, in the country there is a new democracy which is lively, dynamic and participatory and which is being consolidated every day.”

According to Elias Isaac, the director of the Angola office of the Open Society Initiative for Southern Africa, the protests were getting to the authorities.

“You can see that they are feeling the pressure, otherwise they wouldn’t be reacting like this,” he said.

But MPLA spokesman Rui Falcao Pinto de Andrade denied the government was nervous or that Angola was on the verge of an “Arab Spring”.

“We have nothing to do with North Africa,” he said. “We have come out of a long war and what we need is stability to be able to develop.

“It is easy to be in opposition and criticise everything, to see things that are not there, but we the MPLA are working hard for a new era of development and peace.”

Angola is due to hold elections in 2012, although Dos Santos has not yet confirmed whether he will stand again. Under a new constitution ratified in February 2010, the head of state is chosen from the top of the list of the party that wins the most votes. In 2008, the first election to be held in Angola for 16 years, the MPLA won an 82 percent majority.

The next protest action is scheduled for December.