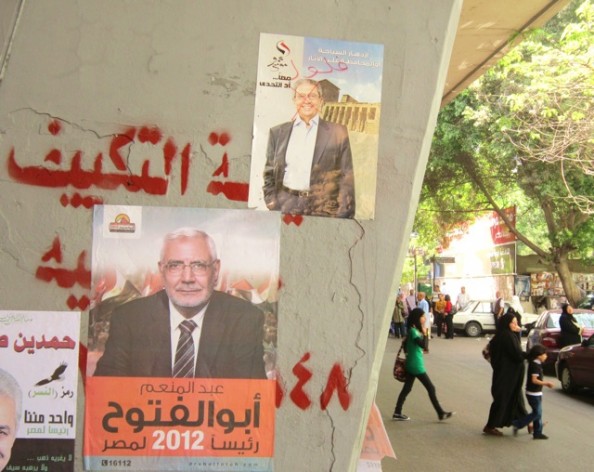 CAIRO, May 15 2012 (IPS) - One is a conservative Islamist attempting to reinvent himself as a pragmatic liberal, the other is a secular statesman trying to distance himself from the authoritarian regime he once served. Both aspire to be Egypt’s first civilian president.

Thirteen candidates are competing to fill the vacancy left by former president Hosni Mubarak following his ouster in a popular uprising 15 months ago. With polling just weeks away, two unlikely front-runners have emerged: Abdel Moneim Aboul Fotouh, a former leader of the previously-banned Muslim Brotherhood, and Amr Moussa, a career diplomat who rose to prominence as Mubarak’s foreign minister.

The historic election is scheduled for May 23-24, with a run-off to be held in June if no candidate receives a majority of the votes cast. The Supreme Council of the Armed Forces (SCAF), which has ruled Egypt since Mubarak’s ouster, has promised to hand over power to a new president by Jul. 1.

A poll by local think tank Al-Ahram Centre for Political and Strategic Studies shows Moussa in the lead with 39 percent of participants’ votes, and Aboul Fotouh in second place with 24.5 percent. Other polls show the two candidates running neck and neck, with many Egyptians still undecided on how they will vote.

“The backgrounds of each of the (two leading) candidates will influence this election,” says political analyst Moustafa Kamel El-Sayed. “Both have pasts that worry voters.”

Moussa, who served as Mubarak’s foreign minister from 1991 to 2001, has faced intense scrutiny over his ties to the former regime since he declared his intention to run for president more than a year ago. Critics have labelled him “feloul”, a pejorative term for remnants of Mubarak’s authoritarian regime.

The 75-year-old statesman has tried to play down his role in Mubarak’s corrupt and often brutal administration, painting himself as an outsider and dissident voice. Yet it was his decade as the regime’s most senior emissary that made him a household name.

As foreign minister, Moussa’s eloquent and edgy speeches criticising Israel earned him immense popularity with the Egyptian street and were the inspiration for the 2001 Arabic pop hit, “I Hate Israel (and I Love Amr Moussa).” It is widely accepted that Mubarak’s insecurity over Moussa’s rising celebrity status was behind his decision to shuffle him to the largely decorative Arab League that same year.

Critics say Moussa’s decade at the helm of the Arab League revealed his political character. They charge that his rousing speeches, particularly his anti-Israeli rhetoric, were geared purely for public consumption, and rarely accompanied by policy or action.

“Moussa is a populist,” says leftist activist Mohamed Fathy, who has yet to decide on a candidate. “His image as (an Arab) nationalist who hates Israel resonates with many Egyptians, but it’s hard to know where he really stands on the issues or how he would rule.

“His links to the old regime and the (deference he has shown to) the SCAF are worrying to say the least,” he adds.

Moussa’s opponents have challenged his record during the uprising that toppled Mubarak, claiming he never publicly criticised the dictator until his ouster was imminent. He further alienated revolutionaries by labelling youth protesting the abuses of the ruling military council as “thugs and anarchists.”

Even his iconic hatred of Israel has been called into question as leaked documents show he once supported plans to sell gas to the Israeli government. Moussa claims he approved the unpopular deal only because it would help the besieged Palestinians obtain their energy requirements.

The former diplomat has campaigned vigorously across Egypt, selling himself as the only candidate with the political experience to lead Egypt from day one as president. Many Egyptians see him as the only secular contender with enough constituent support to win – which would keep the Islamists, who already control parliament, from taking the presidency as well.

“I don’t think people believe Moussa stood against Mubarak or will be any different,” says Yasser El- Sharkawy, a waiter at a Cairo café. “I think most of his support comes from people who fear an Islamist president more than (an authoritarian one).”

Moussa’s chief rival in the race, Aboul Fotouh, was a founding member of Al-Gamaa Al-Islamiya, a once- militant Islamist group still regarded by the U.S. government as a terrorist organisation. The 60-year-old physician later joined the Muslim Brotherhood and was a member of its influential Guidance Bureau for over two decades.

Those close to Aboul Fotouh claim his hard-line views have softened over the years, which led to a falling out with the Brotherhood’s hawkish leadership. He has, for instance, stated that women and Coptic Christians should have the right to run for president – a position that put him at odds with his more conservative peers.

Aboul Fotouh was ejected from the Muslim Brotherhood in July 2011 after declaring his intention to run for president despite the group’s pledge that it would not field a candidate.

Fortune has shaped his political trajectory. In less than a year the former radical has engineered a stunning political transformation, casting himself as a “liberal” Islamist and inspiring an unlikely mix of followers: secular-minded youth, leftist thinkers, disillusioned Muslim Brotherhood members and hardcore fundamentalists.

His support has swelled with the endorsement of an influential Salafi (ultra-conservative Islamist) group following the disqualification of their hard-line candidate.

“He is a Salafi with Salafis, and a liberal with liberals,” he said.

Political analyst El-Sayed says attempts to portray Aboul Fotouh as a liberal are “absurd”. His disagreements with the Muslim Brotherhood’s leadership were primarily over his calls to reform the 84- year-old movement’s autocratic internal governance, not over progressive views on religion and society.

“Aboul Fotouh’s views, particularly on the application of Sharia (Islamic law), show he is still very much a conservative Islamist,” El-Sayed told IPS.

Yet many of Aboul Fotouh’s supporters remain convinced that he is the genuine item: a pious, reform- minded presidential contender who respects women, religious freedom, and democracy. And unlike Moussa, his revolutionary credentials and opposition to the former regime are incontrovertible.

“If an official from the old regime is elected president the revolution has failed,” says El-Sharkawy.