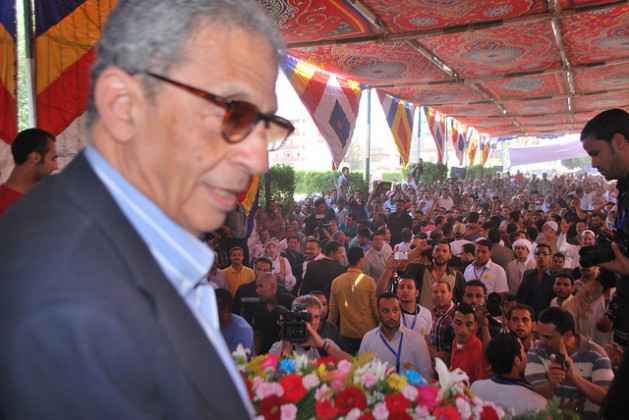 CAIRO, May 23 2012 (IPS) - As Egyptians head to the polls Wednesday and Thursday to elect the country’s first post-Mubarak president, local analysts say that voting results – even on the very eve of the balloting – remain impossible to predict.

“Contrary to recent opinion surveys, the Muslim Brotherhood candidate led the expatriate vote,” Amr Hashem Rabie, expert in domestic politics at the semi-official Al-Ahram Centre for Political and Strategic Studies, told IPS. “This suggests that we might see some major surprises before the election is over.”

The only certainty at this point, Rabie added, “is that the race will come down to one of five leading candidates.”

In all 13 candidates – representing a range of political ideologies, from Islamist to liberal to socialist – will vie for the ballots of some 50 million eligible Egyptian voters. In the event that no single candidate wins an outright majority in the polling (official results of which will be announced on May 29), a runoff vote will be conducted on Jun. 16 and 17.

Recent opinion polls have given Moussa, who served as Mubarak’s foreign minister from 1991 to 2001, a solid – if not decisive – lead. According to a poll conducted by the Al-Ahram Centre between May 14 and 17, Moussa took 32 percent of the vote; Shafiq 23 percent; Morsi and Abul-Fotouh about 15 percent each; and Sabbahi almost 12 percent.

These figures, however, were largely belied by the votes of some 320,000 Egyptians living abroad, who cast ballots in over 100 countries between May 11 and 17. According to preliminary expat voting results, Morsi led the poll, followed by Abul-Fotouh, Sabbahi and Moussa. Shafiq came in a distant fifth.

“The big surprise from the expatriate vote was the unexpectedly strong showing by Morsi and Sabbahi, both of whom did much better than opinion polls had predicted,” said Rabie. “Moussa, meanwhile, only came in fourth, even though recent opinion polls had him leading the race.”

Rabie went on, however, to warn against taking expat poll results as an accurate measure of conventional Egyptian voting patterns. The Egyptian expatriate community in Saudi Arabia, for example, which accounts for almost half of all Egyptian expatriate voters, “is disproportionately pro-Islamist compared to the general Egyptian population,” he said.

Despite Moussa’s poor showing in the expat vote, Rabie believes the race could well be determined by a runoff round between Moussa and an Islamist candidate, either Morsi or Abul-Fotouh. “And if this happens, Moussa is sure to win, because most Egyptians don’t want all branches of government controlled by Islamist parties.”

In Egypt’s first post-Mubarak parliamentary polls late last year, Islamist parties – led by the Brotherhood’s Freedom and Justice Party (FJP) – managed to capture more than 75 percent of the seats in the People’s Assembly (the lower house of Egypt’s parliament).

“My party has thrown its support behind Amr Moussa,” Tarek Zidan, head of the centrist Egyptian Revolution Party told IPS. “He is competent and boasts political and diplomatic experience and will be able to provide Egyptians with a decent life, which was a primary goal of last year’s revolution.”

But while Moussa has long been touted as the front-running contender, it would be a mistake to discount Morsi’s chances, say analysts. As the Muslim Brotherhood’s candidate, they note, Morsi enjoys all of that organisation’s well-known capacity for mobilising supporters, along with its 80 years of experience in political organisation.

“Although the Brotherhood’s popularity has suffered due to recent political missteps, the group – using its formidable capacity to mobilise supporters – has done an excellent job promoting Morsi as a viable candidate,” said Rabie.

Despite his eleventh-hour entry into the race, Morsi’s campaign rallies have drawn tens of thousands of supporters from across the country – unseen in other electoral campaigns. “Based on the numbers and enthusiasm I’ve seen at his campaign events, I wouldn’t be surprised if he won the election in the first round of voting,” said one local journalist who has closely followed the Morsi campaign.

Although Morsi has been disparaged for his lack of charisma (the Brotherhood’s first-choice candidate, Khairat al-Shater, was disqualified from the race for legal reasons), his supporters are quick to note that a vote for Morsi represents a vote of confidence in Egypt’s Muslim Brotherhood.

Meanwhile, although once considered the leading Islamist candidate, Abul-Fotouh – who was expelled from the Brotherhood last year due to his insistence on running for president – appears to have recently lost ground to Morsi. Yet he continues to command considerable popular backing, and his relatively moderate outlook has won him numerous liberal – and even Christian – supporters.

“Our party supports Abul-Fotouh because of his long history of fighting corruption and his electoral programme, which includes a political, economic and social vision for achieving the outstanding goals of last year’s revolution,” Magdi Sherif, head of the centrist Guardians of the Revolution Party told IPS.

Sabbahi and Shafiq, too, are not without their supporters, despite their relatively slim electoral prospects.

Ferghali Ahmed, a 57-year-old kiosk owner, said he would give his vote to Sabbahi – who has made social justice a central plank of his platform – “because Sabbahi is the candidate of Egypt’s poor and downtrodden.”

Mohamed Ayoub, for his part, a 36-year-old engineer, said he would vote for Shafiq – despite the latter’s close association with the former regime – “because of his administrative experience and his ability to re- impose security and stability after 15 months of post-revolution chaos.”

Egypt’s next head of state will be formally named on Jun. 21. On Jun. 30, Egypt’s ruling military council has promised to hand over executive authority – which it has held since Mubarak’s ouster early last year – to the newly-elected president. (END)