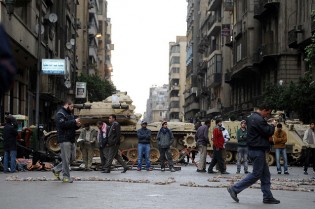 By Adam Morrow and Khaled Moussa al-Omrani
Regardless of who is responsible for Egypt's current political impasse – be it the administration of Islamist president Mohamed Morsi or an aggressive secular opposition – local experts are certain of at least one fact: Egypt's dire economic circumstances will not improve without political stability.

With Egyptian Loan Request, Some Fear Loss of Revolution’s Gains

By Carey L. Biron
After 18 months of talks, on Wednesday Egypt's government formally requested a 4.8-billion-dollar loan from the Washington-based International Monetary Fund (IMF), hoping to stabilise an economy that has continued to badly stutter in the aftermath of the popular uprising that led to the downfall of former President Hosni Mubarak.

By Adam Morrow and Khaled Moussa al-Omrani
More than 15 months after Egypt's Tahrir Square uprising and four months after free parliamentary polls, many Egyptians say that daily living conditions are worse now than they were in the Mubarak era.
ADVERTISEMENT ADVERTISEMENT