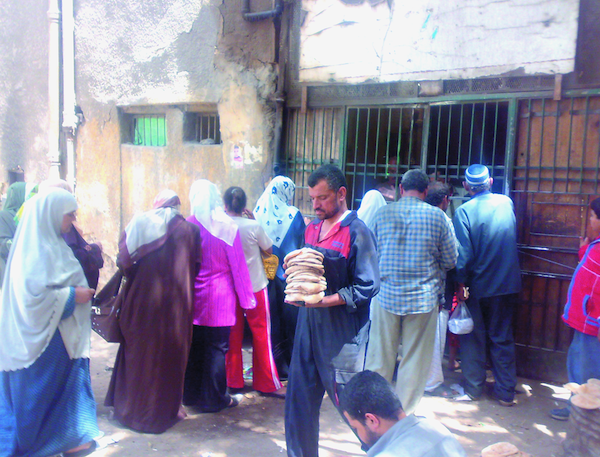 CAIRO, May 10 2013 (IPS) - Regardless of who is responsible for Egypt’s current political impasse – be it the administration of Islamist president Mohamed Morsi or an aggressive secular opposition – local experts are certain of at least one fact: Egypt’s dire economic circumstances will not improve without political stability.

“Egypt’s economic situation is intrinsically tied to the political one,” economic analyst Hamdi Abdel-Azim told IPS. “Economic stability cannot be achieved amid the turbulence and uncertainty, which for months has characterised Egypt’s political scene.”

Chronically high rates of poverty and unemployment, deteriorating public services and infrastructure, an ever-widening state budget deficit, high foreign debt and mounting disparities between rich and poor are just a few of the issues that Mubarak’s regime failed to solve after three decades in power.

Abdel-Azim cited “mismanagement and corruption” as part of the reason for these problems. Still, the country’s economic position “has worsened considerably” in the nine months since Morsi, who hails from Egypt’s Muslim Brotherhood, took highest office, he added.

Within this period, according to Abdel-Azim, the Egyptian pound has declined in value against the dollar, while Egypt’s foreign currency reserves have fallen considerably. Domestic debt has also risen to roughly 187 billion U.S. dollars. “Numerous local companies have been forced out of business, swelling the ranks of the unemployed,” the analyst added.

Egypt’s tourism sector, meanwhile, long considered one of the country’s chief sources of foreign currency, continues to reel from the cumulative effects of long-term political instability.

Since May 2011, Egypt has been negotiating a 4.8-billion-dollar loan from the International Monetary Fund. The proposed loan, however, will be contingent upon a raft of difficult economic reforms, including major subsidy reductions and tax increases.

Egypt’s political opposition, led by the National Salvation Front (NSF), an umbrella grouping of various opposition parties and movements, has been quick to blame President Morsi for the country’s ongoing economic woes.

"Morsi and the Muslim Brotherhood are responsible for Egypt's deteriorating economy."
--Amr Hamzawy

“Morsi and the Muslim Brotherhood are responsible for Egypt’s deteriorating economy,” Amr Hamzawy, former MP and a leading NSF member, said in April. “The government is pushing through economic laws without consulting other political forces, while Egypt’s poor are paying the price for the Morsi administration’s failures.”

Some elements of the opposition have limited their demands to a handful of constitutional changes, a cabinet reshuffle and the dismissal of Egypt’s Morsi-appointed prosecutor-general. Others, however, have gone so far as to demand that Morsi step down in advance of snap presidential elections.

Within the last five months, the NSF-led opposition has organised numerous demonstrations and marches, many of which have ended in violence. The Muslim Brotherhood, for its part, blames Egypt’s faltering economy on the opposition’s more extremist elements, whose endless calls for strikes and protests have resulted only in further destabilisation.

“The main reason for worsening economic conditions is the insistence by the opposition – especially the NSF – on inflaming the political situation by encouraging violent demonstrations, thus further destabilising the country,” Murad Ali, spokesman for the Muslim Brotherhood’s Freedom and Justice Party, told IPS.

“In his trips abroad, President Morsi has tried to attract foreign investment to Egypt in hopes of bolstering the economy and realising longstanding demands for social justice,” Ali added. “But these efforts have largely failed to bear fruit due to perpetual domestic political instability, which has been consistently encouraged by the opposition.”

Local captains of industry, meanwhile, warn that Egypt’s economic prospects will remain dim indeed if the political situation does not settle down.

“Failure to resolve the current political impasse will eventually lead to the destruction of Egypt’s tourism industry,” Ilaham al-Zayat, head of the Union of Egyptian Chambers of Tourism, told IPS. “The steadily declining tourist numbers that Egypt has suffered since the [2011] revolution will eventually drive local tourism companies out of business.”

“Without a degree of long-term political stability,” he added, “tourist numbers will never return to pre-revolution levels.”

“Egypt’s economic deterioration cannot be stopped without an end of the current state of political uncertainty,” Bayoumi told IPS. “No investor will put his money in a country perceived to be unstable or which lacks state institutions that can guarantee the future of his investments.”

Abdel-Azim blames the ongoing political crisis on both the presidency and the secular opposition.

“The Morsi administration has taken a number of poor decisions without considering their long-term effects, while the president’s economic advisors have lacked adequate qualifications,” he said. “The opposition, meanwhile, doesn’t want to accept the results of Egypt’s first democratic presidential elections, which brought Morsi to power.”

On May 7, in an effort to placate critics, Morsi replaced nine government ministers, including those responsible for sensitive economic portfolios – finance, investment, planning and international cooperation, petroleum and agriculture. Notably, most new cabinet appointees are either Muslim Brotherhood members or sympathisers.

Opposition spokesmen blasted Tuesday’s cabinet reshuffle. “These changes don’t amount to anything,” Amr Moussa, a leading NSF member and head of the liberal Conference Party, said. “Another cabinet shake-up will be necessary before long.”

Even though the reshuffle included the heads of strategic economy-related ministries, “the changes fail to meet opposition demands for a more inclusive government,” said Abdel-Azim. “This will only make resolution of Egypt’s dire economic problems all the more difficult.”