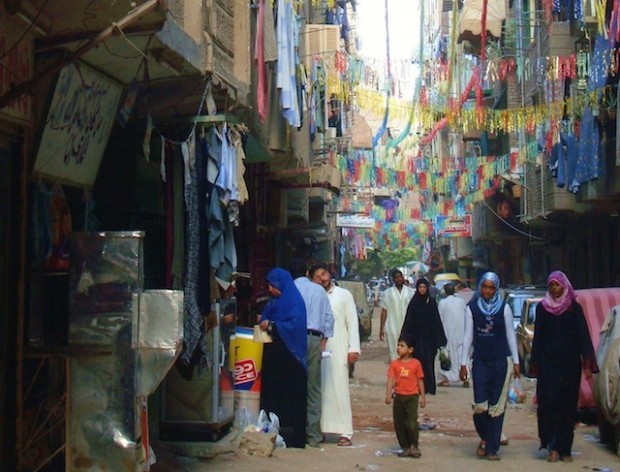 Two years since the revolution, residents of low-income districts have little to celebrate. Credit: Cam McGrath/IPS.

CAIRO, Feb 24 2013 (IPS) - On a recent Friday, coppersmith Alaa Moussa parked himself in the same spot where two years earlier he had stood defiantly with a handwritten banner addressed to then president Hosni Mubarak. His petition that cold February morning in 2011 had listed the key demands of Egypt’s 18-day uprising: “bread, freedom, dignity”.

His new message for President Mohamed Morsi from the Muslim Brotherhood reflected the growing desperation among the nation’s poor and unemployed. It simply stated: “bread, bread, bread.”

Moussa, a father of three from Cairo’s ramshackle Ramlet Boulaq district, says he joined the uprising against Mubarak because he believed the dictator’s fall would end the suffocating corruption and government repression that blocked all paths out of poverty.

It did not, and the disillusioned artisan says his hope of a better life for his family has been crushed by the stark economic realities of post-revolution Egypt.

“We hear promises every day, but we never see any improvement and things are much worse now than under Mubarak.”

In the two years since the uprising, Egypt’s battered economy has taken hit after hit. Political turmoil and labour unrest have shuttered factories, forced layoffs, and scared away tourists and investors. Economic growth has slowed to a crawl, while foreign reserves have withered to critically low levels.

The small workshop where Moussa once fashioned ornamental brass lamps is closed, its owner having absorbed months of losses before laying off his six employees. Some have found jobs in other workshops at a lower salary. Others are still looking.

But with the national unemployment rate at 13 percent, competition for jobs is fierce. Like many, Moussa’s only option was to seek work in the informal sector, where job security is absent.

“Since the revolution, employers are reluctant to hire,” he says. “You work for a few days, then get laid off, and start looking for work again.”

Twenty-seven year old Ramy Shahin was working in an American company before the 2011 uprising. He now drives a taxi, earning about 120 dollars a month after expenses. With his second child on the way, he worries about rising living costs.

“We’re already living hand to mouth,” says Shahin. “We have no savings, so our only choice is to borrow money and pray tomorrow will be better.”

Inflation has averaged nearly 10 percent in the two years since the uprising due to a surge in food prices. Currency depreciation and a proposed government plan for tax increases and subsidy cuts are expected to accelerate inflation in 2013.

The Egyptian Food Observatory, a quarterly government study prepared in cooperation with the World Food Programme (WFP), found that 86 percent of Egyptian households surveyed in September 2012 were unable to meet their basic monthly needs – a 12 percent increase over the June figure. It noted that among vulnerable households, over 60 percent of income goes toward food.

“At least a quarter of Egyptians live below the poverty line of two dollars a day,” says Cairo-based sociologist Madiha El-Safty. “You can imagine how dire their situation must be if they’ve resorted to borrowing to pay for meals.”

Across Egypt, rising prices and hoarding have created shortages of diesel, cooking gas, and food staples. Umm Farouk, a widow with four school-age children, queues for hours each day to buy subsidised bread made from low-grade flour pitted with pebbles and chaff.

President Morsi has promised to solve the country’s economic problems and lure investors back. But his Islamist-led government has inherited corrosive bureaucracy and a crumbling infrastructure from decades of neglect and corruption.

The President’s supporters argue that it could take years to purge institutions and repair the economic damage from the Mubarak regime’s 29-year rule. Critics, however, accuse Morsi of mismanaging the economy and putting the Muslim Brotherhood’s political agenda ahead of fiscal prudence.

“The Muslim Brotherhood is only interested in the poor when they need votes,” says Shahin. “They have no experience running a country or setting economic policy, and their failures at both are destroying Egypt.”

Deteriorating economic conditions have created a backlash not just against the Islamists, but against the democratic process itself. Many Egyptians who supported the 2011 uprising have begun questioning its outcome.

“Of course I’m disappointed,” says Umm Farouk. “The revolution was supposed to make our lives easier. Everything is going backwards.” [END]