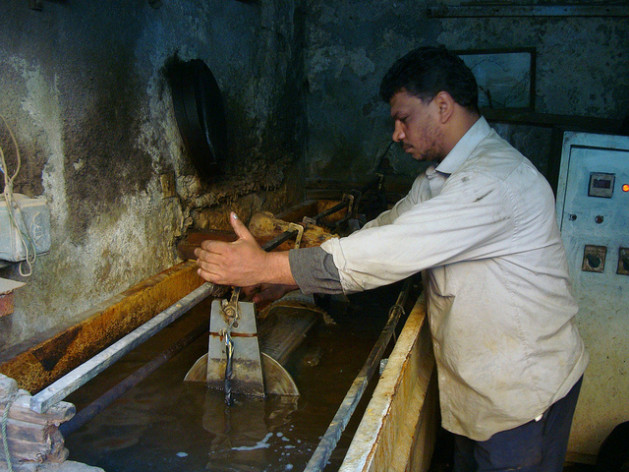 The wages of Egypt's poorest workers have failed to keep up with rising living costs. Credit: Cam McGrath/IPS

CAIRO, Oct 1 2013 (IPS) - Egyptian workers who mobilised during the 2011 uprising that toppled the regime of Hosni Mubarak have used the past two and a half years to organise into unions, press for labour reforms, and strike for better wages and working conditions.

But they face an uphill battle against a state that continues to restrict labour freedoms and to promote Egypt as a cheap-labour, business-friendly destination.

“Nothing has changed,” says journalist and labour activist Adel Zakaria. “The government is still not willing to give workers their rights… and overlooks labour violations under the pretext of attracting investment.”

“The economy was growing rapidly but the wealth concentrated at the top without any trickle down,” Adly told IPS. “The majority were excluded from the country’s economic growth.”

By 2011, on the eve of the mass uprising that toppled Mubarak, nearly a quarter of the population lived below the poverty line, and millions worked in a huge parallel economy where job security is absent.

Nearly two million Egyptians subsisted on the monthly minimum wage of 35 Egyptian pounds (about five dollars at today’s rate), the bulk of their salary coming from a series of bonuses and benefits that employers routinely withheld or used as leverage.

The twilight years of Mubarak’s rule saw a surge in the number of labour strikes as workers defied the state to demand unpaid bonuses and a livable wage.

“The labour protests were part of the social and economic discontent that led to the revolution,” says Adly.

Mubarak’s successors – both the Muslim Brotherhood and the ruling military junta – have continued to push his economic policies, working to contain labour unrest rather than address its underlying causes.

A 2009 International Labour Organisation (ILO) study showed that Egypt’s wages were among the lowest of 72 countries surveyed. The average monthly salary of 542 dollars put the country on par with Mexico and Thailand, and was less than a third of the average in Turkey.

Economic conditions have continued to deteriorate, whittling away at paychecks and pushing the national poverty rate to a record 25.2 percent last year. Political instability has spooked investors and devastated the tourism sector, previously the country’s biggest foreign revenue earner.

Government figures show the unemployment rate has climbed from nine percent before the 2011 uprising to over 13 percent, with more than a quarter of the country’s youth out of work. Inflation has averaged 10 percent, raising living costs and putting pressure on the country’s most disadvantaged citizens.

“There has been no attempt to link wages to rising living expenses,” says labour activist Zakaria. “Most Egyptians are worse off now than before the revolution.”

The 2011 uprising brought a heightened awareness of labour rights to workers, who have used the chaotic transition since Mubarak’s downfall to organise into thousands of independent trade unions, challenging the hegemony of state-controlled syndicates.

The free unions – estimated to represent nearly three million workers in this country of 85 million people – have been at the forefront of a wave of strikes that has grown in size and scope.

Zakaria says the emerging labour movement has empowered workers and increased their leverage. Last year there were a record 2,000 collective worker actions, with protests calling for better wages, payment of overdue bonuses, and the reinstatement of unfairly sacked employees.

Workers have also called on the government to abolish Mubarak-era labour laws and establish wage controls.

“Not all [strikes have been] successful, in fact many have failed,” Zakaria told IPS. “But since the revolution the government and employers have been more inclined to negotiate with workers, instead of beating them into submission – though they still do that too.”

In October 2011, the government caved in to pressure and revised the minimum wage for the first time in 25 years. It was a hollow victory for labour groups, which were disappointed by the decision to set the wage at 700 Egyptian pounds (102 dollars), less than half of what they had campaigned for.

The government recently pledged to increase the minimum monthly wage for six million public sector workers to 1,200 Egyptian pounds (174 dollars), but rejected calls to extend it to the 19 million employees in the private sector.

Fatma Ramadan, a board member of the Egyptian Federation of Independent Trade Unions (EFITU), says the government has made some adjustments to public sector wages, but continues to provide cover for exploitative private employers, fearing worker concessions could push investors toward cheaper and more servile labour markets.

The average weekly pay of government and public sector workers grew 29 percent in 2012 to reach 845 Egyptian pounds (124 dollars), according to the Central Agency for Public Mobilisation and Statistics (CAPMAS). Private sector salaries saw piecemeal increases, but largely stayed the same, according to official information.

“The military and feloul (remnants of the old regime) have worked to keep workers from exercising their rights, including the right to organise into unions or strike,” says Ramadan. “They have claimed that strikes are hurting the economy, but it is not for workers to forfeit their rights in order to protect the interests of business tycoons.”