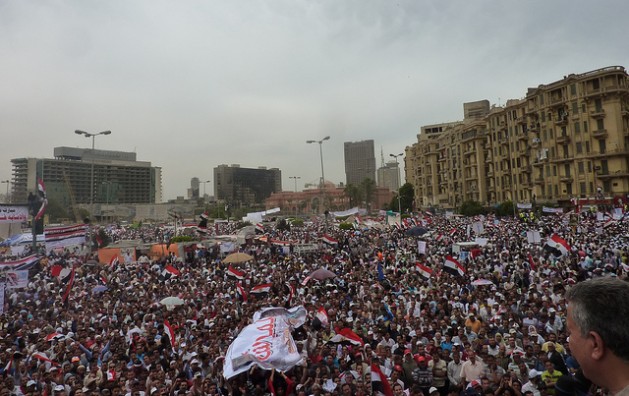 CAIRO, May 18 2012 (IPS) - More than 15 months after Egypt’s Tahrir Square uprising and four months after free parliamentary polls, many Egyptians say that daily living conditions are worse now than they were in the Mubarak era.

“Conditions for the average Egyptian have become worse – economically, socially and in terms of security – than they were before the revolution,” Egyptian analyst Ammar Ali Hassan tells IPS.

Since the popular uprising early last year which saw the Mubarak regime replaced with a ruling military council, Egyptians have complained of steadily rising prices for a number of strategic commodities. These include basic foodstuffs – sugar, rice, cooking oil – and vital fuels, such as butane, diesel and gasoline.

“Over the course of the last year, prices at the market have skyrocketed inexcusably. One kilogram of tomatoes just jumped from one to five pounds overnight (one Egyptian pound is 16 U.S. cents),” says Tarek Moussa, a 34-year-old employee at a local trading company. “My monthly salary is now barely enough to keep food on the table for my wife and two children.”

The steadily rising cost of living has been accompanied by supply shortages, especially of fuels used for transport and cooking.

In Cairo, recent months have seen long lines at gas stations – frequently stretching around the block – due to weeks-long gasoline shortages. There have also been frequent reports of fights breaking out over butane gas cylinders, used for cooking by most Egyptian households, which are also in increasingly short supply.

“My transportation costs have jumped sharply because bus and microbus drivers have all doubled their prices due to the chronic shortage of gasoline,” says Moussa. “Given my low salary, it’s become more cost- effective to simply not go to work.”

Along with these deepening economic grievances, many Egyptians also complain of an ongoing post- revolution security vacuum and its effects on domestic security.

At the height of last year’s uprising, the Mubarak regime withdrew Egypt’s police forces nationwide, leaving domestic policing responsibilities in the hands of the military – which has done little to stop the resultant upsurge in crime. Police forces have yet to be redeployed at pre-revolution levels.

In the streets of the capital, muggings – an infrequent occurrence during the Mubarak era – have now become commonplace. Automobile theft appears to have become one of the country’s few growth industries.

The lack of domestic security, in tandem with ongoing regional turmoil, has also taken its toll on Egypt’s once thriving tourism sector, which has traditionally represented a leading employer and primary source of foreign currency. According to Egypt’s tourism ministry, annual tourism revenue fell from some 12.5 billion dollars in 2010 to some 8.8 billion dollars in 2011.

On Apr. 20, hundreds of thousands of demonstrators from across the political spectrum converged on Cairo’s Tahrir Square to voice longstanding grievances, chief among them the worsening standard of living.

Hassan, however, is quick to stress that Egypt’s deepening economic and security woes should not be blamed on last year’s uprising.

“The revolution, which liberated Egyptian political life after more than 30 years of autocracy, should not be blamed for deteriorating conditions,” he says. “The current deterioration is a direct result of the military council’s failure to properly administer Egypt’s ongoing transition to democracy.

“Had the ruling military establishment adopted a few simple measures, living conditions would be better today. It should have worked harder to ensure domestic security, prevent market monopolies, stimulate the economy and recover public funds pilfered by the former regime.”

Hassan does not rule out the possibility that the negligence is intentional. “These conspicuous failures might reflect the military’s lack of political and administrative experience, or hasty decision-making. Or they could be premeditated with the aim of discrediting the revolution and its ideals.”

The ruling military council has repeatedly vowed to hand over executive authority to Egypt’s next head of state after presidential elections are held later this month.

Voicing a common opinion, Magdi Sherif, head of the centrist Guardians of the Revolution Party, attributes Egypt’s worsening living conditions to the fact that “most, if not all, of Egypt’s key economic activity remains in the hands of former regime elements.”

Sherif attributes the ongoing security vacuum to a “fifth column of Mubarak regime holdovers who remain in charge of the interior ministry, which has actively worked – and continues to work – to promote instability and discredit the revolution.”

Both men, however, also place blame – albeit to a lesser extent – on Egypt’s post-revolution political powers. These include Islamist parties, which together now hold more than three-quarters of the seats in parliament, along with their liberal and leftist counterparts.

“Egypt’s economic situation wouldn’t be so bad if the Islamist parties used their newfound power in parliament to press for outstanding revolutionary demands, like passing antitrust legislation and raising the minimum wage,” says Hassan. “Instead, they’re using their parliamentary clout to jockey for power with the ruling military council.”

Sherif, for his part, is quick to point out that post-revolution Egypt is in its “political adolescence”.

“And this adolescence extends to all political factions: the Islamists, the liberals, the revolutionaries,” Sherif tells IPS. “This is a primary reason for the current political deadlock – most political forces are putting their own narrow interests above those of the nation.”

“Candidates are promising to solve all the country’s problems,” says Sherif. “But Egypt’s next president better deliver or he could have a second revolution on his hands.” (END)