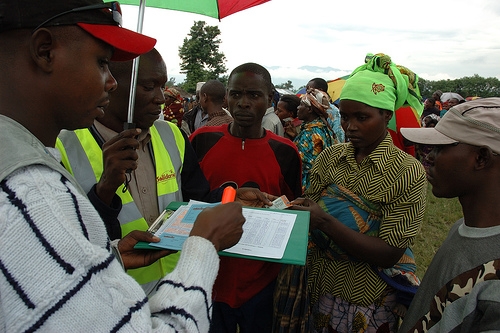 KIKWIT, Dec 2 2011 (IPS) - While the Congolese are awaiting the official results of the late November presidential elections, three of the eleven candidates have already called for them to be annulled.

In the meantime, the main opposition candidate, Etienne Tshisekedi, and outgoing President Joseph Kabila both seem certain of their victory.

The people of the Democratic Republic of Congo (DRC) ended up voting over the course of three days, from Nov. 28 to 30, to elect a new head of state and members of parliament, after the elections were extended due to irregularities and several serious incidents that delayed or prevented people from voting.

At the polling station “Collège Saint Boniface” in Masina on the outskirts of Kinshasa, the capital, dozens of voters waited Nov. 30 for hours starting at 7:00 am at the local court. Voting did not start until 11:00 am, following the late arrival of materials, including the ballots.

“I fulfilled my civic duty around 1:00 pm in the presence of national and international observers, as well as witnesses from political parties. Many people gave up trying to vote,” Junior Mvula, a student at the University of Kinshasa, told IPS.

At Kazambangwangwa, a town about 110 km from Kikwit in Bandundu province in the southwest of the country, the people voted Nov. 29. “The materials arrived Nov. 28 around 7:00 pm. Many voters from surrounding villages had already returned home on Monday night because they were too tired to vote,” said Justin Kabasa, a trainer working for the Congolese Independent National Electoral Commission (CENI).

Françoise Kapita, an angry resident of Kikwit, did not vote on Nov. 28. “I travelled to all polling stations in the centre of the city but I couldn’t find my name on any electoral list. Yet I remember having been enrolled in the station of Wayi-Wayi,” she told IPS waving her voter’s card in her hand.

Many voters around the country experienced the same situation. However, the CENI had previously issued a statement that allowed all voters holding an official voter registration card to vote in the polling station where they were enrolled, even if their names were not on the electoral lists.

At Muvuma, a town not far from Kikwit, the local police arrested a nurse called Yvone Mbani on Nov. 28. She has been charged with organised electoral fraud.

“The woman held fake voting booths, ballot boxes and administrative papers; she does work for CENI. These materials were intended to be used at a polling station near Imbongo,” said Patrick Tshefu, a prosecutor in Kikwit where Mbani is being held while the investigation is underway.

“At Bakole in Kananga (in the centre of the country), people are very angry and they burned three polling stations and election materials,” reported Julienne Elameji, a religious worker based in the province of Western Kasai.

“Other official CENI materials, including ballots, were burned on Nov. 28 by the population at Lwandanda, a village 25 km south of Kananga. The people were upset because of the delays,” said Michel Tshiyoyo, a journalist working for a private radio and television company in Kananga.

In Lubumbashi, in Katanga province in the southeast, people witnessed an armed attack.

“In the primary school of Ndjandja, in the town of Kampemba, unidentified armed men entered the polling stations, took the election materials and fired at police on Monday (Nov. 28). Three police officers and a female voter were killed,” said Sylvie Manda Kabongo, a local radio reporter. “People think that the attackers were former Katangan soldiers.”

Some political parties, especially opposition candidate Etienne Tshisekedi’s Union for Democracy and Social Progress (UDPS), denounced several attempts at fraud in polling stations, including the one in Kananga where witnesses reported having seen ballots filled out before the start of the elections.

CENI chairman Daniel Ngoy Mulunda said: “We have been operational at 99.2 percent; in 63,380 polling stations we only had 485 problems. Every time we noticed a problem, we organised a new session for the voters. This situation will however not affect the final results.”

Not everybody agrees. “The vote was held in a hurry. It would have been better if CENI had postponed the elections; the problems would not have happened,” said Floribert Kiama, deputy director of the Mwinda Cultural Centre, a nongovernmental organisation based in Kikwit.

After all these incidents and irregularities, Justine Kakes, the chairwoman of “Dynamique de la jeunesse féminine congolaise”, a national organisation that brings together Congolese girls and young women, is asking herself: “Will the candidates now easily accept the official results?”