DAKAR, Feb 23 2012 (IPS) - There are two women among the 14 candidates contesting the first round of Senegalese presidential elections that will be held on Feb. 26. But according to several analysts, this overwhelmingly Muslim West African country is not ready to be governed by a woman.


One of the female candidates is Amsatou Sow Sidibé, a law professor at Dakar’s Cheikh Anta Diop University (UCAD), leader of the civil society group Convergence of Stakeholders for the Defense of Republican Values. The other is independent candidate and fashion designer Diouma Diakhaté Dieng.

Sow Sidibé, 59, already has a modest track record in politics, while Diakhaté Dieng entered the race at the last moment, her candidacy catching many observers by surprise. 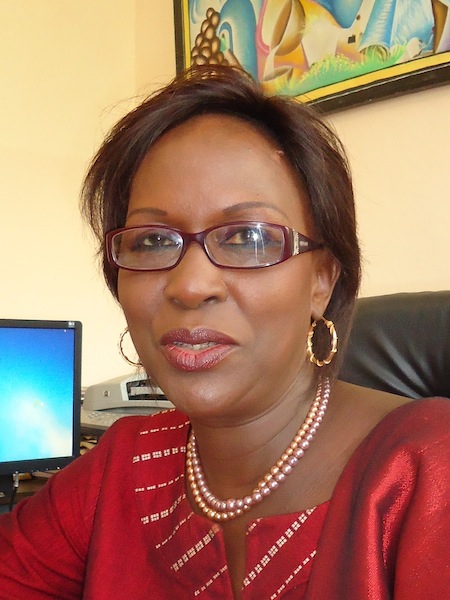 One of the female candidates is Amsatou Sow Sidibé, a law professor at Dakar's Cheikh Anta Diop University (UCAD), leader of the civil society group Convergence of Stakeholders for the Defense of Republican Values. Courtesy of Trust Africa

Even if some think that courage and gender go well together and could help the two candidates, others feel that Senegal’s electorate is not yet ready to entrust a woman with the reins of power.

The two candidates are well aware of the status of women in the country and the way they are perceived by men, and this is why they are seeking to break the taboo by winning on Feb. 26.

Sow Sidibé says that she has spent decades fighting to promot women’s rights and leadership, because there can be no democracy without the participation of half of the population: 52 percent of Senegal’s population is female, according to 2011 statistics.

On the question of education, she believes it necessary to “allow all young Senegalese to acquire skills that will enable them hold down a decent job, and to enter professional life early”, and this can be accomplished through a policy of education for all.

Sow Sidibé promises to fight against the high cost of living and to address health issues. “We intend to index pensions to the cost of living, to improve health care for soldiers with disabilities… or even to build social housing,” she told IPS.

“Impunity must end and corruption must be resisted. So much money comes into this country and I promise, if I come to power, to manage it as a good mother,” she said. According to her, “poverty concerns 80 percent of the population, and its eradication will happen through voluntary strategies which will target vulnerable people”.

According to Sow Sidibé, Senegal suffers from many problems and it is time to put the country’s destiny in a woman’s hands for equitable management of goods and resources. She adds that it’s necessary to give a chance to women and children to definitively resolve the conflict in the southern region of Casamance.

Diakhaté Dieng, the second candidate, 65, believes that the unemployed and women have not been accounted for in government’s policy and that it’s necessary to help unemployed youth between the ages of 18 and 30 to get practical training.

She says that the difficulties facing the country are enormous, underlining the importance of confronting problems of youth unemployment, without ignoring the need for a definitive resolution of the Casamance conflict.

“Once in power, we must enhance the image of education for all. Schools will be restructured and rebuilt, teachers’ salaries will be revised upwards,” she said. “Nor will the energy crisis will not be ignored,  where we now have to count on private donors in order to assure customers and avoid power cuts that we have been living with for more than five years.”

Voters’ opinions of these women are divided. “We are very attached to our traditions. We may talk about equality, but leadership is not part of women’s role,” said Alioune Samb, a literature student at UCAD.

In contrast, his colleague, Issa Gning, says that is an unfair stigmatisation, because according to him, women know the needs of the people better – and act as mothers would. “I would not hesitate to vote for a woman,” he told IPS.

Astou Dieng, a Dakar-based sociologist, also thinks that Senegalese voters are not ready to see a woman in the country’s highest office, because tradition is a weight on their thinking that must not  be forgotten.

“Here in Senegal, there are still problems of caste. People still think of women as sub-human. Sure, there has been change, but this is only in Dakar; in the interior, women are still marginalised,” she told IPS, expressing her belief that the candidacy of the singer Youssou N’Dour was rejected simply because he is a griot – a member of an inferior social class.

For Idrissa Seck, presidential candidate, to have women candidates proves that the country aspires to real change. “I wish good luck to everyone. Presently, we hope for just one thing, the departure of Abdoulaye Wade. If this comes to happen thanks to the women, that’s fine,” he told IPS.

Talla Sylla, a member of the opposition coaltion “Benno Siguil Sénégal”, has asked people to vote for the women candidates.

“Women have played and continue to play an important role in our society. The two candidates should be supported. It’s true that here tradition is still alive, but with women ministers, legislators, and others, people are begining to be aware,” he said.