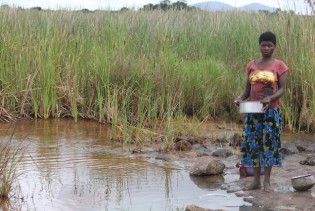 By Claire Ngozo
Small and large businesses in Malawi are counting their losses following the cabinet’s decision not to host the African Union summit in July.

By Claire Ngozo
They survived floods and witnessed the horrific scenes of their houses, livestock, household items and gardens being swept away at the end of January. Now, the people of the Nsanje and Chikhwawa districts on Malawi’s southern border with Mozambique are facing another menace; a cholera outbreak, which has already killed one child and infected up to 103 people.

By Claire Ngozo
A campaign to stop people buying merchandise from street vendors is gaining momentum in Malawi’s main cities of Lilongwe, Blantyre and Mzuzu after the small-scale traders went on a rampage undressing women and girls wearing trousers, leggings, shorts and mini-skirts.

By Claire Ngozo
"The future for least developed countries lies in trade, productive capacity and governance more than in aid," said Cheick Sidi Diarra, United Nations High representative for the Least Developed Countries, responding to criticism of the plan of action put forward as the U.N. conference on the world's poorest nations drew to a close in Istanbul.

By Claire Ngozo
The dominant approaches to development have failed the world’s poorest citizens and now the paradigm must change. This is the strong message coming from over 2,000 non-governmental organisations gathered at the civil society forum for the Fourth U.N. Conference on the Least Developed Countries (LDC-IV) in Istanbul, Turkey.

By Claire Ngozo
Malawi's gross domestic product has grown by more than six percent in each year since 2005. The country's most recent Welfare Monitoring Survey finds unemployment stands at just one percent. At a glance, Malawi makes being a landlocked, least developed country almost desirable.

By Claire Ngozo
Malawi is bracing itself for difficult economic times following a decision by the country’s main donors to withhold financial aid amounting to $400 million. Donors say they are responding to a range of governance and human rights issues in the country.

By Claire Ngozo
An hour and fifteen minutes each day: Melina Kalunga has plenty of time to measure how long it takes to resolve a legal battle over Malawi's Electoral Commission.

By Claire Ngozo
Malawi has directed local government officials to develop local response strategies to the effects of climate change.