LILONGWE, Feb 3 2012 (IPS) - The black market for foreign exchange and fuel is booming in the midst of an acute scarcity in Malawi. The shortage is so severe that even the Consumer Association of Malawi, an influential consumer rights body, has come out in support of the black market. 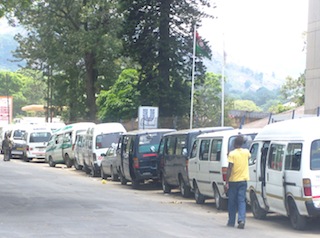 The queue outside a petrol station. Because of the fuel shortage people have to wait in long queues and endure sleepless nights at petrol stations. Credit: Claire Ngozo/IPS

Since September 2010, there has been an erratic availability of both fuel and forex here. But the shortages grew worse in 2011 when people started spending nights at service stations, queuing to buy fuel. Those seeking to purchase foreign exchange have had to wait for up to two months after applying to banks for the money.

The shortages lead to violent nationwide protests last July. At the time, President Bingu wa Mutharika blamed the shortage partly on International Monetary Fund (IMF) policies, while IMF and local economic experts repeatedly called on the government to devalue the Malawi kwacha to generate forex. The government has refused to do so.

John Kapito, the consumer association’s executive director, told IPS that that in light of the situation consumers still have a right to fuel and forex and that an alternative has to be allowed if the normal market cannot keep up with people’s needs.

“Actually what has been created is a parallel market. It’s not a black market because it is not bad; it is doing consumers a lot of good and we should accept it as such,” said Kapito.

He, however, bemoaned the exorbitant prices being charged on the parallel market.

“I am really making a killing,” said Kamowa. He charges up to 325 Malawian kwacha for a dollar, when the official rate is 167 kwacha to the dollar. It is indeed a rip-off, but Malawians have no option but to pay the exorbitant rates if they want the foreign currency.

Malawi continues to reel under severe economic problems after the country’s major donors cut aid to the country last year. Up to 40 percent of Malawi’s national budget has been dependent on donors and donors funded 80 percent of the country’s development budget.

While the situation has progressed from bad to worse, there are many who have seen a business opportunity in the crisis. Kamowa plies his trade in Old Town, one of the country’s busiest trading areas in the capital, Lilongwe. He told IPS that his business is thriving by the day.

Since he started selling foreign exchange on the black market he has bought a new car and a plot of land to build a house on. “It’s really becoming lucrative,” said Kamowa.

Consumers, Kamowa said, do not have a choice and have to buy from the black market because banks cannot easily provide them with foreign currency.

“Demand is very high and people are ending up paying a lot of money to access foreign exchange,” Kamowa said.

While the banks are having a difficult time obtaining the currency, Kamuzu is a little more innovative in his methods of buying dollars.

He explained that he hangs about at Malawi’s main airport, Kamuzu International, and at international bus depots where he buys dollars from people coming into the country. He offers a higher rate than what the banks and foreign exchange bureaus, so people sell him their dollars.

“I also buy forex from people who work in international organisations. They always have foreign currency,” Kamowa said. As the country’s administrative capital, Lilongwe has a high population of expatriates.

The black market for diesel and petrol is also booming. Many small-scale vendors have abandoned their usual trade in clothing, electronics and food items and have begun selling fuel.

The fuel traders brave long queues and sleepless nights long after many other consumers have given up. Then they sell it for 4.5 dollars a litre, almost twice the regular price of 2.3 dollars a litre.

“Diesel and petrol are selling like hot cakes on the black market because people still want to be able to go about their business without being disrupted by the fuel shortages at the pumps,” said Chimwemwe Kasupe, a vendor in the populous Biwi Township, in Lilongwe. He has stopped selling electronics and now trades in fuel.

“I have spent so many nights on fuel queues. I fill up my two cars with diesel and petrol and siphon it into jerry cans, which I sell off to customers,” Kasupe told IPS.

But the government needs to resolve the problems soon, Kapito said. “Our government is failing us. It must resolve these economic problems so that people do not spend so much on such basic needs such as fuel,” said Kapito.

While the government is working on a solution, they are also attempting to shut down the black market.

Malawi’s Minister of Information Patricia Kaliati told IPS that the government will not tolerate the mushrooming of parallel markets and will ensure that they are closed down.

“We are working very hard to see that fuel and forex are available. We are really getting frustrated by the traders on the black market as they are stocking up on fuel and forex while the majority is failing to access the same,” said Kaliati.

Last week, 21 people were arrested for selling fuel illegally and 10,000 litres of fuel was confiscated from vendors, according to national police spokesperson Dave Chingwalu.

On Jan. 15, the police arrested two Asian nationals who operate businesses in Lilongwe at the airport as they attempted to externalise 185,000 dollars to Dubai.

Meanwhile, Mutharika continues to blame the business community for the shortage, especially foreign investors, who he accused of externalising foreign currency.

The most recent accusation was at a news conference on Jan. 31. Mutharika said he would eventually catch up with the culprits. “I know where the forex is going. You will not beat the system forever, no matter how smart you are,” he threatened.

Meanwhile, the country continues to face the effects of the economic problems hitting the country.

Prices for basic necessities such as the staple maize flour, bread and sugar have doubled due to the fuel and forex shortages.

A report by the Employers Consultative Association of Malawi (ECAM), a body of employers, indicated that up to 12,000 people would lose their jobs by June if the current economic crisis were not checked.

ECAM said that production in many organisations and companies has declined by at least 50 percent due to the scarcity of fuel and foreign currency.