BLANTYRE, Nov 4 2011 (IPS) - In Mbedza village, a remote rural community in southern Malawi, Fedson Feston beams an infant’s awkward smile and swings his tiny arms up towards the face of his mother. Four months old, Fedson is too young to know how lucky he is to be alive. 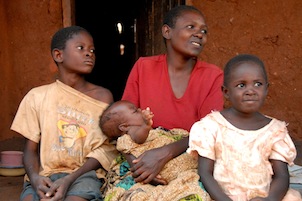 Manes Feston, flanked by her children, holds her four-month-old son Fedson. He was one of triplets but his siblings did not survive. Credit: Travis Lupick/IPS

When his mother, Manes, went into labour, she and her husband were far from the nearest hospital. The couple found a bush on the side of the road, and that’s where Fedson and two siblings – triplets, it turned out – were born.

One, a boy named Ezera, died in a hospital the next day. Shortly after, Fedson and his sister, Mandaliza, were discharged.

Premature and still weak, the newborns needed special care, Manes recalled the doctors telling her. “The children were always to be strapped to the belly and be in a warm place all the time,” she said.

But it was winter, and that proved difficult.

They are a desperately poor family, and Manes’s husband was always away looking for work. Moreover, the couple had five other young children to look after.

It was not long before Mandaliza passed away.

“The house that we live in is makeshift and does not provide enough warmth for premature children,” Manes said. “I think that contributed to our losing the other child.”

After Manes survived their difficult birth, the smallest semblance of a welfare state might have saved the second child.

A few hundred Malawi kwacha (roughly two dollars) could have bought the family extra blankets and kerosene, or even a meagre amount of unemployment insurance could have provided the family some financial security. (Manes’s husband was a seasonal worker and unemployed when the triplets were born.)

But in this small country in the Southern Africa region, such social safety nets largely do not exist.

“To me, this is the reason why women like me are suffering and reaching the extent where we (lose) children who should have otherwise lived,” Manes complained.

This family’s situation is not an isolated case. In Malawi, 74 percent of the population lives on less than 1.25 dollars a day, and nearly one in 10 children die before their fifth birthday.

Reflecting the fact that significant segments of the population are fundamentally excluded from society due to poverty and inequality, the 2010 Ibrahim Index of African Governance recently handed Malawi an abysmal score of two out of 10.

There is legislation aimed at protecting families from falling on hard times, such as the Employment Act and the recently amended Pension Bill.

However, according to a 2010 report by the International Labour Office in Geneva, 90 percent of Malawians – more than 13 million people – work outside the formal economy.

Minister of Labour Lucius Kanyumba argued that the government has attempted to bring such people under the protection of the law. Section 43 of the Employment Act refers to benefits for seasonal workers, he noted. And a 2010 amendment to the act reduced the qualifying period for the payment of long service benefits from 12 months to three.

“This is the drive that the government is making in an effort to address the imbalances for all workers in Malawi,” he said, “whether in formal or informal industries.”

But the evidence on the ground suggests that such efforts are failing to reach the most vulnerable people they are intended to help.

Jonathan Mbenje, 73, is a night guard. “For me, to be working at this old age is not out of choice,” he said. “Being a guard, especially at this age, is very dangerous.”

Mbenje claimed that when his employer and many others do pay out severance packages the amounts often fall far short of what the law requires.

“Most of the time, they give someone between (120 to 240 dollars),” he said, emphasising that that is a one-time severance payment. “With that kind of money, you cannot survive; hence I am still working at age 73.”

Enock Andaradi, 79, told a similar story. Found scavenging through a garbage dump in Blantyre, Andaradi explained that while he was also once a security guard, he is now forced to live off other people’s waste.

He said that he had never heard of any sort of social service that provides assistance to the elderly.

Chandiwira Chisi, Malawi campaign coordinator for Action Aid, a United Kingdom-based non- governmental organisation that focuses on poverty reduction, argued that such situations are the realities of a developing economy. “They (informal workers) are left out of the social support system,” he said.

Chisi argued that current labour laws in Malawi give little power to the average worker, and provide too many opportunities for employers to take advantage of staff.

He described the scheme as one that promotes meaningful work for those employed in the informal sector. It promotes business skills and awareness of labour rights, while providing start-up capital for small businesses, he explained.

“The ultra-poor and vulnerable have been inevitably excluded from benefiting and taking full advantage of the economic development process,” the document states. And so at the initiative’s core, said Minister of Gender, Child, and Community Development Reen Kachere, is a social cash transfer programme.

Eligible households are given an average of 12 dollars a month, plus additional allowances (roughly 1.20 to 2.40 dollars) for each child enrolled in school.

Piloted in a single district in 2006, there are now seven regions benefiting from the programme, delivering financial assistance to more than 30,400 households. Plans are in the works to expand into a further six districts next year, Kachere said. “And then after one more year, we want to apply it to even more of the country.”

The Social Support Policy is the exact sort of programme that might have saved Fedson’s brother and sister. Back in Mbedza village, Manes spoke of the pain she still bears.

“I fail to accept that I lost my children, who could have survived if somebody had done something,” she said. “When I was at the hospital, I met other women with similar problems. If only government could come in to assist vulnerable people who cannot assist themselves.”

Manes maintains that if she had had access to better social services, her two children would still be alive.