LESOTHO: Government to Turn its Back on Textile Industry

MASERU, Oct 27 2011 (IPS) - Lesotho’s textile sector – the country’s largest employer – is regarded by many as the only way out of the poverty trap in a tiny kingdom where more than half of the population lives on less than 1.25 dollars a day. But what many do not know is that the government and the World Bank have unofficially turned their backs on the sector and will soon cut important subsidies. 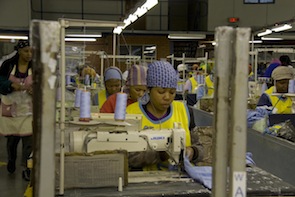 Makhoase Lethibelane, 30, works 10 long hours each day as a label printer at the Shinning Century Limited textile factory in Lesotho’s capital Maseru. Her work is repetitive, draining and badly paid. At the end of each month, Lethibelane takes home a meagre salary of 122 dollars.

Her income not only has to support herself and her eight-year-old daughter, but also her unemployed parents. Still, Lethibelane says she feels “lucky to have a job, since many others have lost theirs.”

Lesotho is one of Africa’s largest textile manufacturers, with the majority of its exports destined for the United States. The country boasts some 40 textile and apparel plants. But since the global economic crisis caused textile exports to dwindle, many of this country’s 60,000 textile workers lost their jobs.

At Shinning Century, half of the factory’s machines stand idle. Managing director Jennifer Chen says she had to lay off two-thirds of her staff over the past couple of years. She only employs 500 to 600 workers at the moment.

“We lost many orders due to the financial crisis,” explains Chen. Some of her main customers, well- known U.S. brands GAP and Banana Republic, moved their business to China or Vietnam when the economic meltdown hit in order to save money on lower salaries in Asia, she says.

For the past few years, Lesotho had been a favourite textile-manufacturing destination due to the African Growth and Opportunities Act (AGOA), a tariff-preference programme designed by the U.S. government in 2004 to attract business to Africa.

The impact was immediate: numerous Asian investors took advantage of AGOA benefits and set up their factories in Lesotho. The number of textile jobs tripled in a country where nearly half the population is unemployed and one in four is HIV-positive.

“AGOA secures us business because it offers duty-free supply without quota limitations,” says Chen, who hails from Taiwan. In addition, textile manufacturers have been receiving heavy subsidies from Lesotho’s government to keep the country attractive compared to Asian countries, where minimum salaries and worker’s rights are seldom observed.

Even though who benefits most from AGOA remains questionable – almost all of Lesotho’s clothing factories are owned by Asian immigrants who reap the main profits while Basotho workers scrape by on survival wages – both factory owners and the Basotho people have firmly placed their hopes on the revival of the local textile industry, eager to emulate Mauritius’ success in creating a competitive, high- end export market for textiles.

According to the World Bank, Lesotho’s Gini coefficient – which measures inequality and ranges from 0, or perfect equality, to 1, or perfect inequality – is at 0.63 among the highest in the world. It has by far surpassed the threshold of 0.4 at which serious inequality could lead to social unrest.

With AGOA poised to expire in 2015, and Lesotho’s preferential status with the U.S. thereby under threat, textile manufacturers as well as textile unions have been trying to come up with alternatives to rescue an industry on which the livelihoods of 40,000 workers and their families depend. “We have to find ways to develop a regional supply chain in the Southern African Development Community (SADC),” reckons Chen.

Union representatives demand diversification and expansion of the industry to stay competitive. “We need to start manufacturing production materials locally, like fabric, zips, hangers, buttons,” says United Textile Employees general-secretary Bahlakoana Lebakae. “At the moment all our raw materials come from the East.”

But unbeknown to unions and manufacturers, Lesotho’s government has made different plans.

“The textile sector lacks profitability. It’s no longer competitive internationally. Government has given up on it and clearly indicated to us it can’t subsidise the textile (industry) any longer,” World Bank Lesotho senior operations officer Macmillan Anyanwu told IPS.

After consultation with the World Bank, Lesotho’s government decided to ditch the textile sector, to eventually cut the subsidies and instead invest in agriculture, horticulture, water management and tourism. “We need to diversify away from textiles into other areas,” hinted Prime Minister Pakalitha Mosisili in February.

With the help of the World Bank, the government has been piloting new sector development since 2009.

“We are trying to find markets for (agricultural) products and water supply in and outside the (SADC) region. We also focus on increasing the capacity of small to medium-sized businesses and improving border services to boost economic growth,” says Anyanwu, explaining some of the steps government has taken with the support of the World Bank.

By 2013, when the pilot phase comes to an end, government will officially adjust its economic policy to invest in the most promising sectors. What will become of the thousands of textile workers and their families remains unclear.