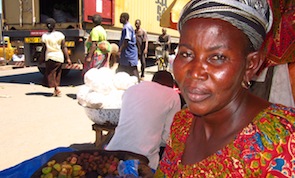 Untouched by Ghana’s meager social support system and beyond the reach of its tatty pension scheme, she is a composite of this West African country’s elderly women: poor, struggling, and often forgotten.

Gender activists say the situation of women like Sayitou is caused by a confluence of factors, from low rates of female education to increasingly nuclear family structures, and from social policy vacuums to cultural discrimination. Compounding the picture are Ghana’s labour markets, which, because of longstanding gender roles, herd women into the informal sector.

“We need to realise that the majority of our women are the mainstay of our economy,” says Elizabeth Quarcor Akpalu, executive director of Advocates for Gender Equity. “We need to do something to help them in their old age. They are dying in pain.”

Sayitou’s husband divorced her after their families had a row and she raises three of their four kids herself. She buys them clothes, food, and pays for their education with the less than 19 dollars she makes every day (some of which also goes to her own food, clothing, and business supplies budget).

“I want to take care of my children,” she says, “but I also feel the pain of living alone. I pray that my children are in good health, so tomorrow they can take care of me when I can’t do anything.”

Deeper in the slum, 70-year-old Sanatu Seidu sits on a wooden bench among an open-air foundation of crumbling cement. She is surrounded by bubbling pots worried over by women wrapped in robes. This is Valne, her northern foods restaurant. Like Sayitou, she is part of the informal economy.

When she first started almost fifteen years ago, Seidu quickly turned big profits, building the business into a 15-staff, 375-dollar-a-day phenomenon. But the flow of job-seeking migrants to Old Fadama is never-ending, and competition from other businesses has driven her profits down to between 60 and 90 dollars a day.

She uses that money to pay a staff of six, keep the business stocked, feed and clothe herself and her four children, two of whom live in Northern Region, and look after her sick husband, who also lives in the north.

“I face a lot of difficulties because of my age,” she says. “Sometimes, I can’t come out and help. Sometimes, I just lie down because I’m tired or I’m having pain in my body.”

There are pension schemes in Ghana. The biggest is a statutory programme run by the Social Security and National Insurance Trust (SSNIT) which, as of the end of 2010, included 107,312 people from the private and public sectors. Only 17,229 of them were women, because the scheme is for formal sector employees.

According to SSNIT’s 2010 annual report, beneficiaries get between 26 and 1,250-plus dollars a month. Some beneficiaries on the low end retired in the 1990s, when Ghana’s salaries were much lower and the corresponding contributions were fewer.

Those on the high end worked in high-income employment, earning larger salaries and making larger contributions. There are 94 men receiving pensions of 1,250-plus dollars, compared to 11 women. Over 50 percent of beneficiaries receive less than 62 dollars a month.

The National Pensioners Association has been battling SSNIT to have the baselines increased, but there have not been any breakthroughs. Up until recently, SSNIT had been giving percentage increases every year based on the fund’s investment returns. Last year, they gave an across the board increase of six dollars a month. The association is calling for a minimum benefit of 62 dollars a month.

Meanwhile, SSNIT does have a scheme for the informal sector. It started as a pilot project in 2005 and went national three years later. It is a flexible programme, allowing members to contribute what they can when they can. The contributions are stored in two accounts, one for retirement and one for working life. The latter account can be tapped after five months of contributions, a feature SSNIT says attracts younger workers into early savings programmes.

But just 32 percent of the account’s 90,000 contributors are female. Ghana’s 24 million people are almost equally divided among the sexes, though women live longer. And while there are plenty of men in the informal sector – hawkers, fishermen, masons – advocates say it is primarily a woman’s realm. However, there is no reason why so few women belong to this scheme.

“That’s where you find the majority of women, in the informal sector,” says Akpalu. “Without good education, it’ll be impossible for a lot to be in the formal sector. Even some with education, if you look at where they are placed, it’s a pyramid. They’re at the bottom section and lower echelon.”

Other than pensions, there is the government’s Livelihood Empowerment Against Poverty (LEAP) programme, which is designed for the extremely poor, the orphaned, the disabled, and the elderly. The programme, which grows year over year, currently targets 55,000 households, of which 35 percent are elderly. Of the latter number, 65 percent are female.

Depending on the size of the household, benefits are between five and nine dollars a month, paid six times a year.

“The LEAP is so little and insignificant,” says Akpalu. “It doesn’t address any problem.”

Currently, Ghana’s 20-year-old constitution is under review. A review panel, formed in 2010, toured the country hearing from stakeholders, and a final report is in the works. The Network for Women’s Rights in Ghana sought to broaden the definition of discrimination in the constitution to include discrimination caused by economic and cultural systems, as well as address a host of rights issues.

“(The committee) didn’t take a lot of it on board,” says Akpalu.

Sayitou is not bothered with advocacy. She is accepting of her lot, and proud of her accomplishments. Everything else is just life.

“Some people, when they grow up, they’ve suffered since childhood,” she says. “But through that, the person can do anything for herself, because she has the capacity to succeed. Some people grow up rich and when they are aged they can’t work. They don’t know how to work.”