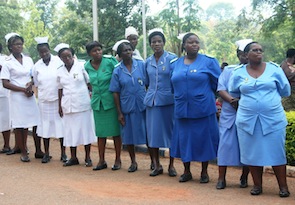 The lack of aid has had a significant impact on the country’s health sector as international donors fund up to 90 percent of Malawi’s medical budget.

While some donors are supplying key medical facilities with life-saving drugs, this is not sufficient to meet the widespread demand as the supplies are mainly for the country’s three main referral hospitals located in Blantyre, Lilongwe and Mzuzu.

Throughout the country, patients seeking medical treatment at government-run medical facilities are unable to access medication such as anti-retrovirals (ARVs), anti-malarial drugs and even painkillers.

Health facilities are also experiencing a shortage of medical equipment such as gloves, and malaria and HIV/AIDS testing kits.

Agnes Makwasa, a 45-year-old HIV-positive patient from the country’s commercial capital, Blantyre, is struggling to obtain free ARVs. For five years, she received a free one-month supply from her local government clinic, until recently.

“They told me that they could not give me my whole dosage because the clinic had limited stock. I had to return for more drugs after a week, but by then the clinic had run out,” Makwasa told IPS. She said she ended up paying 50 dollars for the medication at a private pharmacy.

“I am a widow with five young children, and I am not employed. I make a living selling doughnuts and only make about 90 dollars a month. This means that my family is living on a very tight budget. This is also a threat to my health now that I cannot afford a balanced diet, which HIV patients are advised to be on while on treatment,” said Makwasa. Up to 60 percent of Malawi’s 13.1 million people live below the poverty line.

The situation has also caused concern in rural Malawi as some health facilities have run out of basic painkillers like aspirin.

Malita Nalikata from Mulanje, southern Malawi, told IPS that medical staff at her local hospital told her that they and the other medical facilities in her district did not have anti-malarial drugs to treat her malaria. They advised her to buy painkillers for treatment, as they did not even have that in stock.

“I don’t have money, so I ended up going to see a traditional healer who gave me some herbs to eat with porridge,” said Nalikata. She gave the medicine man a chicken as payment.

“That is all I could afford and traditional healers accept such kind of payment,” Nalikata said. ? It is common practice in rural areas for poor people to patronise traditional healers when they cannot access medical care from government health centres.

About 80 percent of Malawians use public health facilities, according to the Malawi Health Equity Network, a group of civil society organisations in the health sector.

The Malawi Health Donor Group, a network of international donors including Britain, the United States, Germany and United Nations agencies, have refused to release assistance until the government cleans up the health sector.

Chairperson of the Health Donor Group Athanase Nzokirishaka told IPS that the international donors want the government to work on the shortcomings facing the health sector, especially the way medical drugs and supplies are managed by the Central Medical Stores.

The donors, according to Nzokirishaka, are also concerned with poor record management for the country’s drugs and delays in auditing the process of drug procurement.

“Government has a long way to go towards restoring the trust of the international community, and of Malawians, in the national drug system,” said Nzokirishaka.

“Malawi will need to demonstrate that it can fully resolve issues to do with inefficiency, leakage and corruption at all levels of the system. Indeed weaknesses in the supply chain have already been a major factor in reduced or delayed funding for some donors in the past,” said Nzokirishaka.

For the past year, the donors have left the government to procure drugs for the country’s health facilities, a situation which has led to the critical drug shortage.

For many years, up to 40 percent of Malawi’s national budget has been dependent on donors and 80 percent of the country’s development budget was provided under the Common Approach to Budget Support.

This included contributions from Britain, Germany, the African Development Bank, Norway, the European Union and the World Bank. However, the British and German governments have refused to release up to 400 million dollars this year accusing the Malawian government of bad governance.

The government of Malawi has acknowledged the shortcomings in the health system.

Responding to the concerns by the Health Donor Group, Minister of Health Jean Kalirani admitted to IPS that the lingering weaknesses in the Central Medical Stores and the supply chain of drugs have affected the supply of medicines in health centres and hospitals across the country.

“Government is addressing the drug crisis by strengthening the capacity of the Central Medical Stores as a long term solution. In the short term, we are procuring drugs through an emergency tender while resolving issues that have been raised by the donors,” said Kalirani.

She explained that the government is working on establishing a viable financial model, which will be used to track the flow of drugs efficiently.