LILONGWE, Jan 25 2012 (IPS) - A campaign to stop people buying merchandise from street vendors is gaining momentum in Malawi’s main cities of Lilongwe, Blantyre and Mzuzu after the small-scale traders went on a rampage undressing women and girls wearing trousers, leggings, shorts and mini-skirts. 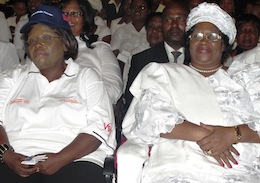 Vice President Joyce Banda (r) and Minister of Gender Reen Kachere (l) at a meeting to condemn the abuse of women by the vendors. Credit: Claire Ngozo/IPS

Street vendors occupy the pavements and street corners in the busiest parts of the country’s major cities and towns. Here they sell everything from clothing to electronic items to food and groceries. But when the vendors in Lilongwe began rioting last week in protest against their forced removal by the local city council, things took a turn for the worse as vendors began stripping women and physically assaulting them.

Dubbed “lero nkugule, mawa undivule,” which is vernacular Chichewa and translates into “today I buy from you, tomorrow you undress me”, the campaign was initiated on Jan. 18, the day after the assaults. Women activists want to use the campaign to teach the vendors a lesson on respecting women, according to Seodi White, executive director of the influential women rights organisation, Women in Law in Southern Africa-Malawi.

White told IPS that the call to boycott the vendors is also being extended to men who also want to protest against their conduct.

“We want to send a clear message that we don’t want to go back to the past when we did not have freedom of dressing,” said White.

Malawi was under a dictatorship until 1994 when it adopted democratic rule. During that time, however, women were banned from wearing shorts, mini-skirts and trousers. But the vendors now claim that they want to reinstitute this dress code and “bring back sanity among women.”

Recently, the street vendors have become a powerful force politically; in August last year the country’s President Bingu wa Mutharika provided them with an undisclosed sum of money to use as a revolving loan fund.

Mutharika also wined and dined up to 2,000 vendors at his flamboyant palace soon after the Jul. 20 to 21 nationwide protests against bad governance and the declining economic situation in the country. Up to 21 people were killed by police and 275 were arrested during the protests and looting, in which the vendors actively participated.

During the dinner, Mutharika rallied support from the merchants and asked them not to participate in any demonstrations again. He promised that he would never remove them from the streets.

But on Jan. 5, the Lilongwe City Assembly, the capital city council, attempted to remove the vendors from the streets into existing designated areas. The traders rioted and overwhelmed the police who tried to quell the fracas, which saw businesses closing down for a day. The Malawi Army had to be called in to disperse the vendors who went back to trading on the streets the next day.

Tensions continued to run high and on Jan. 17 the vendors turned against women and girls claiming that Mutharika had sent them to “clean the streets of women dressed inappropriately.”

Joyce Ngwira, one of the many women who were stripped naked as she walked in Lilongwe Old Town, told IPS that she is still traumatised following the ordeal.

“I was wearing my decent pair of trousers only to see a group of vendors pouncing on me. They pulled me in different directions and tore off my clothes. It took a group of other passers-by to rescue me,” she said.

The conduct of the vendors quickly spread to the country’s other main cities of Blantyre and Mzuzu. Since then many women have changed their way of dressing and have begun wearing conservative long skirts and dresses when going to work and to the shops.

Since last Wednesday, armed police have been patrolling the streets to protect the women and girls and 15 people have since been arrested, according to police spokesperson Dave Chingwalu.

“The men found causing trouble for women have been charged with violence and malicious damage” said Chingwalu. “We will not just watch women being harassed; there’s freedom of dressing in this country and no one has a right to dictate how women dress.”

Meanwhile, women activists and human rights defenders held a protest meeting in Blantyre on Jan. 20 where a cross section of people, including the country’s female Vice President Joyce Banda, the Minister of Gender Reen Kachere and other politicians, gathered to condemn the abuse of women by the vendors.

When the attacks started Banda had told the local media that economic frustrations should be blamed for the ill conduct of the vendors. “There is so much suffering that people have decided to vent their frustrations on each other,” she said.

Malawi continues to reel under severe economic problems after the country’s major donors cut aid to the country last year. Up to 40 percent of Malawi’s national budget has been dependent on donors and 80 percent of the country’s development budget was being provided under the Common Approach to Budget Support, which includes Britain, Germany, the African Development Bank, Norway, the European Union and the World Bank. The British and German governments are already refusing to release up to 400 million dollars.

Meanwhile, the vendors have already noted a decline in sales following the boycott, according to Ganizo Makupa, general secretary for vendors in Blantyre.

“There are just a few unruly people who are undressing women and denting the name of vendors. We are very sorry about this behaviour and we are looking at ways of instilling discipline among our group,” said Makupa.