ISTANBUL, May 13 2011 (IPS) - “The future for least developed countries lies in trade, productive capacity and governance more than in aid,” said Cheick Sidi Diarra, United Nations High representative for the Least Developed Countries, responding to criticism of the plan of action put forward as the U.N. conference on the world’s poorest nations drew to a close in Istanbul. 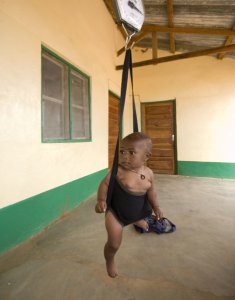 Future hanging in balance: the health, education and livelihoods of millions depend on successful implementation of development programme. Credit: Jessie Boylan

Representatives of governments said they were optimistic that the Istanbul Programme of Action for the decade 2011 to 2020 will prove instrumental in seeing at least half of the 48 countries now classed as least developed leave that category in the next ten years.

The new plan, formally adopted by delegates on May 13, stresses the need for the poor countries to modernise and diversify their economies. It also calls for job creation to eventually eradicate poverty.

The civil society forum swiftly rejected the plan of action as inadequate. The NGO group said donors and development partners had avoided committing themselves to delivering on long-standing pledges to provide substantial financial support for LDCs.

But Diarra said the role of development partners is clearly articulated in the Istanbul Plan of Action. Developed countries committed to achieving a target of delivering 0.15 to 0.20 percent of national income as official development assistance (ODA) to poor countries.

“This will entail a significant increase in ODA to LDCs, since aid levels remain a slightly less than 0.1 percent of donor’s gross national income,” states a U.N. press release.

LDCs are characterised first by low per capita income, below 900 dollars per year; second, by weaknesses in human development including such things as health, nutrition and education; and third, by economic vulnerability in terms of agricultural output, and narrow dependence on limited exports that are vulnerable to sudden, drastic price changes.

To move up from an LDC classification to the next rung - lower income country status - an economy must exceed LDC standards in two of the three categories for at least six years. Since the category of LDCs was created in 1971, only three countries have succeeded: Botswana, Cape Verde and Maldives.

The U.N. hopes to see half of the 48 countries currently classed as least developed leave the category in the next decade, but the club will first grow by one: South Sudan will become a member in July 2011.


But this commitment is not new: the 2001 Brussels Programme of Action that emerged from the third LDCs conference contained an identical commitment.

Still, Upendra Yadav, deputy prime minister and foreign minister of Nepal expressed his satisfaction with the programme of action. Nepal chairs the Global LDCs Coordination Bureau and Yadav was speaking for all LDCs at the conference.

“The programme of action provides a clear strategy for development in LDCs. During the negotiations, everyone tried to find a common middle ground and the strategy reflects that,” said Yadav.

He said the plan also defines visions and pathways for development. “It is comprehensive and realistic,” said the minister.

Turkey, which hosted the conference, also came out smiling. Turkish Foreign Minister Ahmet Davutoğlu said the conference was a success as it is expected that through the programme of action, foreign investment in LDCs will reach a cumulative $10 billion by 2020.

“Turkey has assumed the responsibility of putting LDC-related topics on the agenda of international community and contributing to efforts for finding solutions to the problems of the LDCs until 2020. In a way, Turkey has been the voice of the LDCs,” he said.

The U.N. has announced that several countries will graduate from the LDC category within the next two years. Angola, Bangladesh, Equatorial Guinea, Nepal and Timor Leste are all being considered for graduation, according to Diarra.

“We are still working on the assessment process because some of the countries are still weak in human capital development,” said the U.N. High Representative.

During the opening of the civil society forum on May 8, U.N. Secretary-General Ban Ki-Moon said he believed LDCs are poised to ride the next wave of development. He told participants that the world needs to work together to improve the situation for all, and that the Istanbul conference should reflect the voices of civil society.

The next decade’s programme of action has now been set out; regardless of its merits and flaws, the future of 800 million citizens of the world’s poorest countries will hinge on its implementation in good faith by the governments of developed and developing countries alike, as well as development agencies, international finance institutions and corporations.

Civil society’s role in engaging with the programme and holding role players accountable will also be crucial.