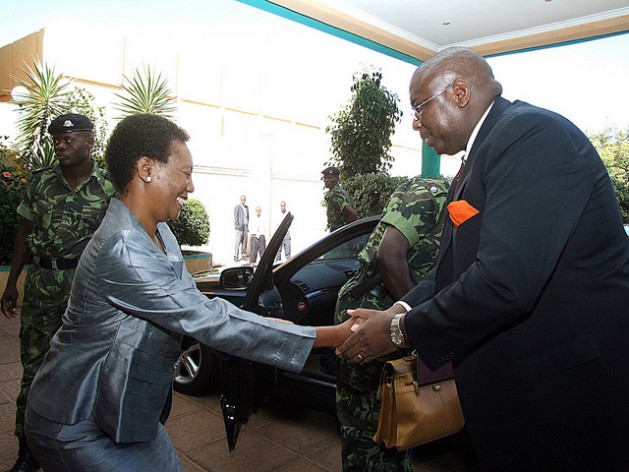 LILONGWE, Jun 13 2012 (IPS) - Small and large businesses in Malawi are counting their losses following the cabinet’s decision not to host the African Union summit in July.

The decision is based on the government’s refusal to allow Sudanese President Omar Hassan al Bashir permission to enter the country.

Bashir is wanted by the International Criminal Court (ICC), which has accused him of committing genocide, war crimes and crimes against humanity in Sudan’s Darfur region. As an ICC member state, Malawi would have been forced to arrest Bashir upon entry.

Vice President Khumbo Kachale announced on Jun. 8 that the cabinet decided against hosting the Jul. 15-16 summit, as it was not in Malawi’s best interests to have Bashir attend. The AU Commission had insisted that the southern African nation allow the Sudanese leader to enter the country.

“Cabinet took this position with the primary consideration of what is in the best interests of Malawians. While we have obligations to abide by the decisions of the African Union, we are also under obligation to other international agreements, including the Rome Statute (which established the ICC),” said Kachale.

However, the decision has had financial ramifications across Malawi’s capital, Lilongwe, as it had been all but ready to host the AU.

“Cabinet noted that the state of preparedness of our country is beyond any doubt ready. This was confirmed by the evaluation mission from the African Union which was in the country last week, and left satisfied with the progress made in all aspects of our hosting obligations,” said Kachale.

A number of technical meetings in the days ahead of the summit were lined up to take place in Lilongwe from Jul. 9. The event had promised to turn the otherwise quiet city into a hive of business activity. Up to 35 heads of states and 4,000 delegates were expected to attend and boost the demand for hospitality services and local goods.

Sam Namathanga, president of the Travel Agents Association of Malawi (TAAM), a national grouping of air travel and tour operators, told IPS that the losses for the hospitality industry would be significant. This includes money invested in businesses in preparation for the summit, and estimated future earnings.

“We don’t know the magnitude of the losses yet, but they will be huge. We are talking about loss of business in air ticket sales; ground travel, which includes car hire services; and tour packages, which also includes accommodation,” said Namathanga.

He said that members of TAAM who had hoped to boost their revenue were disappointed.

“The tourism industry has lost a big opportunity. We would have greatly promoted the industry through the summit,” said Namathanga.

A quick informal survey by IPS showed that the average cost of hiring a vehicle in Lilongwe costs 85 dollars per day, while accommodation ranges from 60 to 400 dollars per night.

According to information released by the AU secretariat, all delegates were expected to pay their own costs with the exception of heads of states, heads of delegations and ministers of foreign affairs.

Many small local establishments had seen it as an opportunity to grow their businesses.

Christina Kajawo, who owns a bar and restaurant in the Lilongwe city centre, told IPS that six months ago she began preparing for the summit by renovating her premises. She said she obtained a bank loan of 3,000 dollars because she wanted to make her restaurant and bar look more presentable.

“I hoped that I would make a good profit from the patronage of the bar and restaurant during the AU summit and would be able to pay back the loan,” she said.

Now Kajawo fears that she may have to close down her business.

“I hope I will find a way to pay back the bank, otherwise I may eventually end up being declared bankrupt and lose my livelihood. I feel stranded right now because there isn’t much business from the locals since the Kwacha was devalued and prices of goods have risen,” said Kajawo.

In her quest to salvage the Malawian economy, President Joyce Banda devalued the Kwacha from K168 to K250 to the dollar. The price of commodities and imported goods has increased by an average of 50 percent since the May devaluation.

By devaluing the Kwacha, Banda was responding to requests that the International Monetary Fund and local economists had made to the country’s late President Bingu wa Mutharika. However, Mutharika had repeatedly refused to take the step that economists believed would have saved the country’s failing economy.

The decision to cancel the AU summit is seen as a direct move to appease Malawi’s Western donors, especially the United States and the United Kingdom. In the past, both nations have said that they would not provide aid to any country that hosts Bashir and fails to arrest him.

Malawi’s donor relations are only just being repaired.

In the past, international donors accused Mutharika’s government of failing to respect the human rights of lesbian, gay, bisexual and transgender people, and freedom of the press.

When Mutharika was in power, Bashir was allowed entry to Malawi in October 2011 to attend the Common Market for Eastern and Southern Africa summit. This prompted the U.S. government to put its foot down against providing aid to the poor southern African country.

International donors refused to release up to 400 million dollars and the U.S. suspended a 350-million-dollar grant. At the time, almost 40 percent of Malawi’s national budget was donor dependent.

Many donors have since pledged to help Banda restore the country’s economy following her rise to the presidency after Mutharika’s sudden death on Apr. 5.

It therefore came as no surprise when Kachale made his public address cancelling the AU summit.

“Malawi should put the interests of its nationals first and President Banda has done exactly that, and this is a great way forward,” Undule Mwakasungula, the head of the prominent Malawi Centre for Human Rights and Rehabilitation, told IPS.

“We need donors more than anything,” he said.

The summit will now be hosted in Ethiopia’s capital Addis Ababa at the organisation’s headquarters, the AU said on Monday Jun. 11.