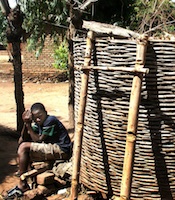 Granary in Mchinji: in the face of declining harvests, farmers are adopting adaptation strategies within their limited means. Credit: FISD/IPS

In September, the country’s Minister of Local Government and Rural Development, Anna Kachikho, called on district commissioners, who are the chief executives in charge of district assemblies, to develop local response strategies against climate change.

The Mchinji district, on the border with Zambia, has long been thought of as the country’s breadbasket. Smallholder farmers in this area have for many years produced bumper yields of maize, the country’s staple food, making a decent living from sales of their surplus across the country.

Almost every household in Mchinji has a field and the district still managed to produce a good yield while other areas in this southern African country were suffering drought conditions in the 1990s.

But in recent times, Mchinji’s yields have started declining even as a government agriculture subsidy programme has boosted overall maize production in the country.

Lizbet Chagunda from Kochilira Village says the district is losing its stance as a major provider of maize.

“We have noticed a decline in the soil fertility and also erratic rainfall patterns which are not very conducive to maize production,” the farmer told IPS. “Many of us are failing to produce enough last the whole year for our own families and we are no longer able to sell the grain to people from other districts.”

Chagunda, 37, who is married with five children and has been farming since she was 17, said the decline in yields has been noticeable over the past six years.

“My family has been cultivating on the same plot for a very long time. In 2004, I harvested up to 120 bags of maize but the yield has been reducing since. I managed to cultivate just 79 bags in the last growing season. The harvest keeps reducing every passing year,” worried Chagunda.

The decline is all the more worrying in light of increased access to quality seed and fertiliser under Malawi’s input subsidy programme.

The fertiliser and seed subsidy programme, introduced in Malawi in 2004, is targeted towards small-holder farmers who cannot afford to buy farm inputs at the normal market price. The beneficiaries receive two coupons – one for improved seed and the other for fertiliser at a subsidised rate.

But not everyone in Mchinji qualifies to benefit from the subsidy programme which is targeted towards poor farmers. Most farmers in the district are perceived to be well-off because they have been able to have surplus yield.

With guidance from government extension workers, Mchinji’s farmers have adopted a range of strategies to adapt to the situation, including irrigation and boosting soil fertility with compost instead of chemical fertiliser.

Soil degradation accelerated by an increase in average temperatures and frequent floods is an important part of the problem, according to the Foundation for Irrigation for Sustainable Development (FISD), a non-governmental organisation working with small-holder farmers.

“We are promoting the use of compost among farmers as one of the adaptation methods against the effects of climate change,” FISD director Moses Chirambo told IPS. His organisation is working alongside agricultural extension workers across the country to support the rural population which depends on agriculture for a livelihood.

Up to 60 percent of Malawi’s 13.1 million population live below the poverty line of $1 per day, according to the United Nations. Sixty-five percent of the population depends on agriculture for their livelihoods.

Chirambo explained that compost does not cost much as it is made cheaply from what could “ordinarily be seen as rubbish” such as grass, dry leaves, plant stalks, animal waste, soil and water.

“All these things are left to decompose for a number of months and farmers use the mixture to boost the fertility of the soil in their fields. If at all, it is only time that is consumed in the production of compost but even then the farmers are able to do some other chores such as clearing their fields while waiting for the manure to be ready,” said Chirambo.

He said compost is more useful than chemical fertiliser now that the rains are becoming more erratic, also due to climate change, because the manure helps the soil to preserve water. “Compost has water in it and it transfers that water into the soil once it is applied,” explained Chirambo.

Water harvesting and irrigation also form part of the strategy being promoted by FISD as an adaptation method against climate change, local farmers in many districts have since benefited from FISD’s initiatives.

FISD is also teaching farmers to use spiral pumps, which harness the energy in a stream or canal’s flow to pump water. “These pumps are cheaper as they do not require energy from humans or machines,” explained Chirambo.

Ben Chilanga, a farmer with seven children who also from Kochilira in Mchinji uses compost in his field where, apart from growing maize and beans, he also grows tobacco, Malawi’s main foreign exchange earner.

Chilanga’s eight-hectare farm puts him in an awkward position; the size of his plot disqualifies him for the national input subsidy programme, but he cannot afford to buy fertiliser at market prices.

“Fertiliser is very expensive. I cannot afford it but I am still able to produce bumper yields because I use manure which does not cost me anything,” said Chilanga.

At the United Nations climate change conference in Denmark in December 2009, Africa’s demands for significant funding to counter the effects of global warming were not met. The Copenhagen Accord included a fast-track adaptation fund far smaller than set out by the unified African position.

Regardless of what comes out of the next round of negotiations in Mexico, adaptation strategies that rely on local resources will be an important part of safeguarding the livelihoods of African farmers.

* This IPS story is part of a series supported by the Climate and Development Knowledge Network http://www.cdkn.org