LILONGWE, Apr 15 2012 (IPS) - She has been in office for less than a week but Malawi’s, and the region’s, first female president, Joyce Banda, has given many people in this poor southern African country hope that its social and economic woes will soon end. 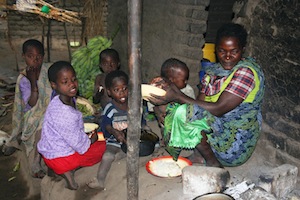 Malawi is one of the poorest countries in the world: 74 percent of the population here lives on less than 1.25 dollars a day. Credit: Claire Ngozo/IPS

The former vice president, who took over the presidency on Apr. 7 following the death of President Bingu wa Mutharika two days earlier, has already axed key people who held influential positions in the previous government. Inspector General of Police Peter Mukhitho and Secretary to the Treasury Joseph Mwanamvekha, under whose reign the country suffered severe fuel and foreign exchange shortages, are some of those who have been fired.

Minister of Information Patricia Kaliati was also fired. Kaliati was the leader of attempts to bar Banda from taking over the presidency after Mutharika’s death, in favour of his brother, Peter. She is a fierce critic of Banda who, she frequently has said, is incapable of leading the country.

But Louda Kamwendo, a small-scale trader in Lilongwe, is hopeful about the changes. Kamwendo told IPS that just last week she was on the verge of closing down her business of importing furniture and building materials from China.

Since September 2010, Malawi has had erratic availability of both fuel and forex, and the impact on Kamwendo’s business had reached crisis point. But the news of Banda’s appointment as president has convinced her to wait in the hope that the economic situation improves.

“I have been waiting for two months now for forex from the bank and this made me miss my scheduled trip to China. I was contemplating closing down my business but I have decided to wait and see what President Banda will do to rescue the situation,” Kamwendo told IPS. She said this was the longest she has ever had to wait to access foreign exchange.

Malawi is one of the poorest countries in the world: 74 percent of the population here lives on less than 1.25 dollars a day, and nearly one in 10 children die before their fifth birthday. The rising cost of basic commodities has added to these woes and the country is also experiencing shortages of necessities such as sugar and bread.

Under Mutharika, the country’s donor relations suffered greatly following accusations that Malawi failed to respect the human rights of lesbian, gay, bisexual and transgender people and the right to freedom of the press. Donors had refused to release up to 400 million dollars and the United States suspended a 350 million dollar grant.

Unprecedented nationwide protests broke out Jul. 20-21, 2011 against Mutharika, who they blamed for the failing economy. Banda had been a vocal supporter of the protests.

On Apr. 10 Banda announced that donors had expressed a willingness to assist Malawi in its economic recovery efforts.

The new president said that she had already been in talks with the United Kingdom and the U.S. over the resumption of aid.

“I am personally committed to ensuring that the government of Malawi addresses issues that negatively affected our relations with donors,” Banda said. “My government is committed to restoring the rule of law, respect for human rights and freedoms and demonstrating good economic governance, starting with making sure Malawi has a programme with the International Monetary Fund.”

Banda’s political changes are given Malawi a new lease on life, according to Dalitso Kubalasa, the executive director of the Malawi Economic Justice Network, a coalition of more than 100 civil society organisations that promotes economic governance.

Kubalasa told IPS that the country has every reason to do better economically and socially if the political will shown by Banda is sustained.

“There has been a general acceptance of the new leadership by almost all stakeholders including the private sector, citizens and international donors. This is really a good sign,” said Kubalasa.

He said that expectations are high and Banda should accelerate her efforts.

“Actions speak louder. She should now put words into action. We are all turning over a new leaf and starting a new chapter,” said Kubalasa.

Prominent political analyst Mustapha Hussein told IPS that Malawians are hopeful they will no longer have to face human rights abuses as they did under Mutharika.

“The police, in the previous government, were being used as an organ of Mutharika’s political party,” the analyst said. “The police were used as an instrument of instilling fear in the citizens, and Banda’s move to dismiss the inspector general of police has given hope to many that this country has indeed changed for the better.”

Hussein told IPS that the initial steps taken by Banda suggest that her People’s Party has social democracy as its ideological base.

“The new government has demonstrated that it wants to move very fast in sorting out problems facing the people of Malawi. I think we have started on the right footing,” said Hussein.

On Apr. 12, Banda swore into office Moses Kunkuyu as the new minister of information.

“Government’s integrity is measured by what its minister of information says. Every government is judged by what comes out of its mouth,” Banda said at the ceremony.

Kaliati had lied on national radio about Mutharika’s death, claiming he was alive long after he had passed away.

Although Kunkuyu, a member of parliament, belongs to Mutharika’s Democratic People’s Party, he and five other MPs in the party openly opposed the late former president’s policies.

Banda also said at a press briefing on Apr. 11 that she would be firing and reshuffling a number of government officials.

“This is normal in a new government. I have to appoint the right people to befitting positions,” said Banda.