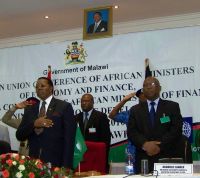 These figures were announced by Abdoulie Janneh, executive secretary of the United Nations Economic Commission for Africa (UNECA), at a joint annual conference of the African Union and UNECA in Malawi’s capital of Lilongwe.

Africa’s continent-wide unemployment rate was at 8.2 percent in 2009, slightly better than the 8.5 percent recorded in 2004 before the global economic boom and bust, according to an economic report launched by the African Union (AU) at the conference which runs from Mar 29 to Apr 1.

“Clearly, in Africa, due to the fall in economic growth, the recent economic and financial crisis has caused a return to below the level of unemployment recorded in 2004,” states the report.

The conference, with the theme “promoting high-level sustainable growth to reduce unemployment in Africa”, brings together African ministers of economy, finance and economic development.

“The challenge that we have now has a continent is to attain high and sustainable levels of growth which would enable us to reduce poverty and unemployment,” Janneh told IPS.

Janet Mgwadira, 51, from Mtandile, a township on the outskirts of Malawi’s capital of Lilongwe, attended the opening ceremony of the conference. The woman has been unemployed for 12 years; she trained as a secretary. Her husband, an agriculturalist, is also unemployed. The family survives on subsistence farming.

Mgwadira has three grown children aged between 25 and 21 who have finished secondary school but only one is employed. “I heard on the radio that the ministers from all over Africa will be coming here discuss ways of creating employment. I came to listen to the speeches so that I know what will happen to my children,” Mgwadira told IPS.

She is waiting for the day when government officials’ plans bear fruit. “I wish my government could find a way of creating employment. I am always concerned about my children. I would want them to have better lives than what we have had so far,” worried Mgwadira.

Up to 65 percent of Malawi’s 13.1 million people live on less than a dollar per day, according Malawian government statistics.

The AU’s current figures indicate that the proportion of people living in extreme poverty, using the new 1.25 dollars per day poverty line, is 51 percent in sub-Saharan Africa and three percent in North Africa.

The report says frustration caused by persistent unemployment and lack of opportunities is likely to prompt young people to gravitate towards charismatic and opportunistic social revolutionaries who blame the current structure of society for their problems.

This, the report says, is another reason why African countries should pay serious attention to unemployment.

Malawi’s president Bingu wa Mutharika, who is also the AU chairperson, said in his speech at the opening ceremony that Africa is not a poor continent but that it is the people of Africa that are poor.

“This is premised on the realisation that Africa has huge and unexploited wealth consisting of natural and mineral resources, wildlife, fish, river basins, lakes and huge arable land. These are not being exploited or utilised by Africans,” stated Mutharika.

African governments should implement home-grown policies which are conceptualised, designed and owned by African people. “Such policies must be implemented, monitored and evaluated by our own experts,” argued Mutharika.

Africa’s population grew by 2.3 percent between 2008 and 2009, reaching about one billion people, according to the report. Some 70 percent of the population is aged 30 or younger.

This population provides Africa with a large pool of labour upon which it could draw for rapid economic growth. But the rapid population increase, together with increased rural-urban migration, creates many problems, including inadequate provision of sanitation and social services, housing and employment.

To create employment, the Lilongwe meeting has agreed that African countries should pursue fiscal and monetary policies to finance investment in infrastructure, education and health-care. The ministers also agreed to focus on labour-intensive projects, such as rural roads and water projects.

Investments that will transform the structure of African economies from reliance on low-employment natural resource extraction to high-employment labour-intensive manufacturing, agro-industry and service provision have also been identified as a solution to unemployment.