NSANJE, Malawi, Feb 9 2012 (IPS) - They survived floods and witnessed the horrific scenes of their houses, livestock, household items and gardens being swept away at the end of January. Now, the people of the Nsanje and Chikhwawa districts on Malawi’s southern border with Mozambique are facing another menace; a cholera outbreak, which has already killed one child and infected up to 103 people. 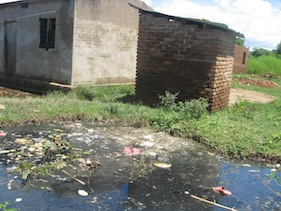 Sewage from the latrines has contaminated water sources in Nsjane, including boreholes and dug-out wells thereby escalating the cholera incidents. Credit: Claire Ngozo/IPS

Government officials have attributed the outbreak to the declining sanitation conditions compounded by the floods; up to 550 pit latrines were washed away in Nsanje alone; a district hardest hit by the floods.

Sewage from the latrines has contaminated water sources in the district including boreholes and dug- out wells thereby escalating the cholera incidents, according to the assistant Disaster Management Officer for Nsanje, Humphrey Magalasi.

“Almost every household in the rural parts of the district only uses a pit latrine. Everything that was in the latrines in the flooded areas has gone into the water sources,” Magalasi told IPS.

Boreholes, dug-out wells, rivers and streams are the main water-sources in the rural parts of Malawi and people use them for all household chores. There are no taps in many villages.

Lucy Mateyu, 46, a single mother of seven children from Mulolo village in Nsanje, told IPS that the floods hit her village as she was preparing lunch for her family on Jan. 23, 2012.

“It had been raining hard and continuously for three days and I was alerted by my eldest child that he had just seen our toilet tumbling down. Before I even went to inspect, the main part of our house crashed. I think we were saved just because all of us were sitting in the kitchen as I was cooking while the other six kids were huddled around the fire to keep warm,” said Mateyu.

She said the family scampered uphill and they watched a raging waterway forming across their homestead washing away everything in its wake. The family ended up at a camp for flood victims set up by the government.

Up to 6,000 people experienced a similar ordeal like Mateyu’s family. In some instances, the Malawi Army had to intervene and airlifted many villagers who were trapped in their flooded homesteads. They were whisked ofg them to the camps.

But the camps are now congested and the survivors are living in unhygienic conditions. Now school classrooms and government offices are being used as rooms to accommodate the flood victims.

“There are 21 of us staying in one small room and we have to share one toilet, which is rarely cleaned,” said James Masitala, 51, who is at the same camp as Mateyu and her children.

“Some people are resorting to defecating in bushes near the camp and this is compounding the problem of lack of cleanliness,” Masitala told IPS. Records at the Ministry of Health indicate that up to 103 people from in Nsanje and the neighbouring Chikhwawa district have been infected with cholera since the beginning of the rainy season in November.

“There are so many other diarrhoeal diseases that are being reported from the camps,” said Magalasi.

He said government is now distributing chlorine to the flood victims, to villages hit by the floods and to neighbouring villages around the camps.

“We want the people to drink treated water since most of the water sources are contaminated. We are also carrying out sensitisation campaigns on the importance of hygiene and working on improving the sanitation situation in the camps by constructing more temporary toilets,” said Magalasi.

There were a few incidents of flooding in Nsanje and Chikhwawa during the rainy season last year and the entire country recorded 76 cholera cases only.

District Commissioner for Nsanje Rodney Simwaka told IPS that government has been building the capacity of villagers in flood preparedness for the past three years since the area is flood prone.

Nsanje and Chikhwawa lie in the lowest part of Malawi and the Ruo River, which comes from Malawi’s highest point, Mulanje Mountain, usually brings with it raging water that flood the two districts. The Ruo flows into Malawi’s largest river, the Shire, a tributary to the Zambezi River in Mozambique.

“We have water level monitoring gadgets and have involved village committees in working with these but the floods took us by surprise this year,” Simwaka told IPS.

He said government also advises people living in flood-prone areas to move to higher ground just before the rains commence but that many resist the move.

“The people are usually reluctant to live their homes and fields and they are only forced to move when the floods come. This makes the situation difficult to handle,” said Simwaka.

Meanwhile there is a massive tree planting campaign going on in the area as one of the flood mitigation measures. There has been a lot of deforestation in the two districts since one of the major livelihoods for the people is the production of charcoal, which they sell to neighbouring Blantyre, Malawi’s main commercial capital.

The country’s rainy season usually ends in April and the risk for more floods is still there for Chikhwawa and Nsanje, according to forecasts from the Department of Climate Change and Meteorological Services, which has warned of tropical cyclones that will bring more heavy rains this month.