ZIMBABAWE: Not Prepared for Floods Amid Conflicting Weather Forecasts

BULAWAYO , Feb 8 2012 (IPS) - Sibongile Dube knows the devastation heavy rain can leave in its wake. A villager in the lowveld area of Mberengwa in Zimbabwe’s Midlands province, Dube’s home is one of many that were washed away by flash floods last year. 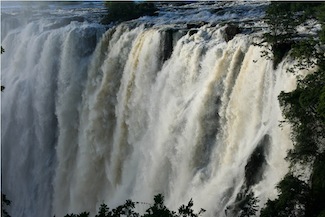 The Zambezi River Authority told villagers living downstream on the Zambezi (pictured) to evacuate their homes because of possible flooding. Credit: Zukiswa Zimela/IPS

“I am still rebuilding my home,” Dube told IPS, pointing to where she has erected a hut that she says serves as her bedroom.

Across the small yard stands a shaky-looking grain storage bin, which has become symbolic of the devastation that swept away thousands of tonnes of grain in last year’s floods.

Hundreds of schools and villages were washed away amid criticism of Zimbabwe’s disaster preparedness and effective early warning systems. This was despite earlier warnings that the floods, which had already left a trail of destruction in their wake in countries that lie along the Zambezi River in Southern Africa, were headed for some parts of the country.

“We were never told that the water would be that bad. We lost livestock and the grain we had harvested,” Dube said, highlighting the plight of thousands of villagers who remain victims not only of natural disasters but also poor early warning and disaster monitoring systems in Zimbabwe.

While rains have only begun to fall in some parts of the country, the Zimbabwe Meteorological Services have given conflicting reports of when to expect it to reach its peak. Initially the service first said December 2011, but then revised this to early January, then again to late January.

Zimbabwe Meteorological Services chief, Tich Zinyemba, has also reversed an adverse forecast issued that warned of imminent floods. He said in late January that the cyclone, which had been expected to reach Zimbabwe last month, had since moved back to Mozambique.

Zinyemba’s latest forecast came despite a warning issued by the Zambezi River Authority that parts of the Zambezi River, which flows through Zimbabwe, would experience floods and advised villagers to prepare for evacuation to higher ground.

This week, experts from the government’s weather services department announced the cyclone from neighbouring Mozambique was no longer headed for Zimbabwe. While villagers are no longer being prepared for the possibility of heavy downpours, for Dube and many others, the threat of rain destroying their homes remains a real threat.

These conflicting weather reports have exposed the country’s lack of preparedness for possible floods.

“We do not know anymore when the rains would fall and how bad it would be,” Dube told IPS, expressing a popular sentiment here as many have lost faith in the reliability of weather forecasts from the meteorological services.

The Civil Protection Unit, a government department responsible for, among other things, evacuating of communities from flood areas, also issued a flood warning last month. The unit has been severely criticised for failing to respond in time to the distress of villagers like Dube, last year.

“There is lack of adequate expertise and the usual lack of resources that is why we even fail to have such things as helicopters to assist our people during floods,” Tymon Ruzende, a disaster preparedness expert who worked with the Red Cross during last year’s floods, told IPS.

“But I also think there is little in terms of preparing communities deal with the prospect of flooding. For example when it is already known the waters will rise, communities must be told to move to higher ground, yet others always resist this,” Ruzende told IPS.

This year, communities that lie along the giant Zambezi basin once again find themselves at the centre of rising waters.

It is here in the Zambezi basin in areas such as Binga, an inaccessible and remote district in northern Zimbabwe, where communities have previously been victim of flooding despite clear signs that the banks would burst.

Jairos Lubimbi, a local councillor, said not much is being done to prepare villagers in the eventuality of floods.

“People here have always lived with floods and it is something which the authorities think is natural and they cannot do anything about saving lives, grain and livestock,” Lubimbi told IPS.

Last month, the Zambezi River Authority told villagers living downstream on the Zambezi to evacuate their homes, but villagers who spoke to IPS said they were still in their homes because “they had nowhere to go.”

“They tell us to move to higher ground, but do not provide alternative homes for us,” said distraught Taboka Sibanda, a villager.

Floods have already moved from Mozambique into South Africa and according to some media reports, the rising waters have claimed up to 20 lives. Concerns remain about possible localised flooding in Zimbabwe.

Experts say Zimbabwe’s shifting climate patterns that have moved the rain season further into the New Year. They say that this has made it difficult to prepare for possible floods as the country lacks state of the art weather tracking systems. This comes amid calls by the United Nations for all early warning systems to be community centred.