LILONGWE, Jan 18 2011 (IPS) - An hour and fifteen minutes each day: Melina Kalunga has plenty of time to measure how long it takes to resolve a legal battle over Malawi’s Electoral Commission. 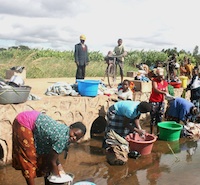 Local govt previously provided space to advocate for the basic needs of women like these. Credit: Claire Ngozo/IPS

It takes Kalunga 30 minutes to walk to the nearest borehole to fetch water for drinking and cooking; and 45 minutes to make her way back with a heavy bucket balanced on her head.

“We had a number of boreholes which came up in the ward when Mrs Johnstone was our councillor. They have all stopped working and we now have to walk long distances to fetch clean water,” said Kalunga.

She is recalling the accomplishments of Ward Councillor Olive Johnstone, when she represented Mchinji District’s Mwenda Ward. Elected to the local council in 2000, Johnstone exemplified what local government is all about.

During her term of office, the former councillor mobilised her community and used funds from the local development fund at the assembly to build three new school blocks and toilets at Buwa Secondary School.

In person, Johnstone radiates confidence. The successful farmer – she grows tobacco and rears livestock – says she stood as a councillor in the first place to make a difference in people’s lives.

The Malawi Electoral Commission (MEC), comprising a chairperson, a judge nominated by the Judicial Service Commission, and six commissioners, is an independent body mandated by the constitution to "conduct free fair, credible and cost effective elections on a regular basis as required by the Constitution.

President Mutharika said an audit of the Commission showed it was unable to account for millions of dollars meant for the 2011 local elections and government was taking over the running of the MEC.

The Malawi Law Society argues that the constitution gives the president no powers to dissolve MEC. MLS Secretary Jabber Alide, there is no constitutional provision for the move taken by the president; the constitution, he says, allows only for individual members of the electoral commission to be removed on the recommendation of the Public Accounts Committee.

Opposition parties are wary of elections under anything other than an independent MEC. MCP spokesperson Nancy Tembo told local media that no election can be free and fair if run by government.


Along with the rest of the country’s councillors, Johnstone’s term came to an end in 2005. There haven’t been local elections since.

Johnstone condemns the absence of the local government set-up. “Women are being short-changed because they have no representation at local level and they have no proper channel for demanding developmental needs. They suffer more than men.”

She worries that the toilets at Buwa Secondary School now need maintenance, but there are no funds available since there is no councillor to lobby for them.

“Now a lot of girls are not willing to go to school because there are no good sanitation facilities for them. They need privacy to be able to maintain themselves within the schools,” she told IPS.

The local development fund also catered for orphans who needed to go to school, but this programme has also fallen by the wayside in the absence of local representatives to secure an annual budget allocation for it.

“There was a bursary which allowed many disadvantaged children to go to school. This bursary is no longer available,” said Johnstone.

Nor has money been found to maintain boreholes or drill new ones.

And so the site of women balancing buckets of water as they walk between their homes and a water point has again become a familiar sight. Most households must rely on untreated water from streams and rivers for many domestic chores such as washing and bathing.

Johnstone had begun preparing to stand for election in local elections scheduled for Apr. 20, 2011, when her plans were derailed. First the elections were postponed from their original November date by the Malawi Electoral Commission.

Then in December, President Bingu wa Mutharika dissolved the Malawi Electoral Commission (MEC), accusing the members of having misused $9.2 million meant for the elections. His right to dissolve the Commission has been challenged by the Malawi Law Society (MLS), a group of lawyers standing in for the legal profession as a whole.

While the battle for the control of MEC goes on, the tier of government closest to the people remains unoccupied.

The main opposition parties; the Malawi Congress Party (MCP) and the United Democratic Front (UDF) have said they do not feel confident the elections will take place this year and have scaled back campaigning and civic education exercises.

“I have stopped campaigning for now because I am not sure if the elections will now be held given the dissolution of the electoral body,” said Johnstone.

Many Malawians are keen to see the dispute resolved regardless of whether government or lawyers prevail.

Johnstone is ready to represent her community again. “I would like to see women having better lives and this is why I want to contest again.”