ISTANBUL, May 8 2011 (IPS) - The dominant approaches to development have failed the world’s poorest citizens and now the paradigm must change. This is the strong message coming from over 2,000 non-governmental organisations gathered at the civil society forum for the Fourth U.N. Conference on the Least Developed Countries (LDC-IV) in Istanbul, Turkey. 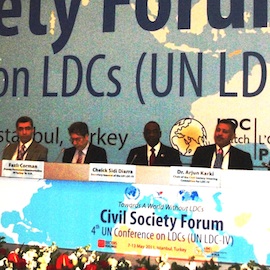 Arjun Karki, spokesperson for the forum, told the gathering that the failure to see more LDC countries graduate from this most vulnerable classification reflects a serious failure of the model of development aid advanced by leading players in the international community.

NGOs charge that an approach privileging economic liberalisation and free trade has been unevenly applied in practice, with developed countries maintaining key measures to protect their own interests while pressing poorer countries to abandon them.

LDCs, they continue, have been obliged to follow the demands of international financial institutions rather than implement their own alternative policies and programmes for sustainable and broad-based development.

To move up from an LDC classification to the next rung – lower income country status – an economy must exceed LDC standards in two of the three categories for at least six years. Since the category of LDCs was created in 1971, only three countries have succeeded: Botswana, Cape Verde and Maldives.

LDCs are characterised first by low per capita income, below 900 dollars per year; second, by weaknesses in human development including such things as health, nutrition and education; and third, by economic vulnerability in agricultural output, and narrow dependence on limited exports that are vulnerable to sudden, drastic price changes.

Energy issues, food and economic crises, gender discrimination, climate change, threats to environment and human health due to unhealthy conditions of production, war and civil war are some of the major problems affecting the 48 countries classed as least developed - 33 of them are found in sub-Saharan Africa.


“LDCs are facing a development emergency and it is the global responsibility to come together and lift the LDCs out of the perpetual cycle of poverty, vulnerability and instability,” said Karki, a leading social activist and development practitioner from Nepal who coordinates the Civil Society Steering Committee of LDC-IV.

He said it is a bitter reality that poor and marginalised people in LDCs have gained little over the past decade. Instead they are having to bear the brunt of new crises of food, water, climate change and global finance, even though these are global problems created by others.

“We cannot keep witnessing the number of LDCs grow, as has been the case since 1971 – from 24 to 48 today. We must do better here in Istanbul,” he said.

A world without LDCs

Civil society groups are recommending solutions that put people before profits. The recommendations are contained in a report titled “A World without LDCs”, which was launched at the civil society forum on May 8.

The report reflects peoples’ perspectives and alternatives to poverty eradication and sustainable development that should shape the LDC agenda.

The new paradigm being put forward by civil society includes a demand for the immediate and unconditional cancellation of all debts owed by LDCs and a review of the mandate and operations of the International Monetary Fund and World Bank.

Another demand is for the formulation of agricultural reform policies and their implementation in favour of smallholder farmers and providing for the regulation of food speculation, land grabs, genetically- modified seeds and large-scale biofuel production.

The chairperson of the Turkish section of medical charity Doctors Worldwide, Dr Ihsan Karaman, agreed with Karki. He said that despite many LDCs being endowed with rich natural resources, they have not been able to achieve self-sufficiency and prosperity for more than a century.

“This situation stands before us as a shame of the international community. In the globalising world, it is self-evident that no matter how far they are from each other, countries and societies interact with each other, and when the resources are not shared and used in an equal and healthy way, humanity as a whole will suffer from it,” said Karaman.

He said it is not possible to talk about a global conscience or global justice, when the development partners – who he described as the “Northern elite” – can sleep comfortably even though they know that the flip side of the wealth of the developed world is that 12 percent of the planet’s people go to bed with an empty stomach every night. Karaman condemned the spending of vast sums on military technology and wars, without honouring much smaller commitments to development aid that could quickly eliminate underdevelopment.

“Let us make decisions together to change this brutal order of the world, which makes the rich richer, and the poor poorer. As parliaments, governments, the private sector, intelligentsia, umbrella organizations and the civil society, let us all renew our oath and join forces for a world without LDCs,” said Karaman.

Civil society is hoping that the Istanbul conference will raise the voice of the global conscience, and give precedence to the shared values of humanity over political and economic goals.

U.N. Secretary General Ban Ki-Moon, who attended the civil society forum, told participants that there is indeed a need for the world to work together to make the world a better place for all and that the Istanbul conference should reflect the voices of the civil society for progress. He said he believed LDCs are poised to ride the next wave of development.