LILONGWE, Apr 8 2012 (IPS) - It would be too simplistic to think that Malawi’s problems have ended with the death of President Bingu wa Mutharika. But it is an opportunity for newly appointed President Joyce Banda, who is also leader of the opposition People’s Party, to step up and offer a new and more responsive style of leadership. 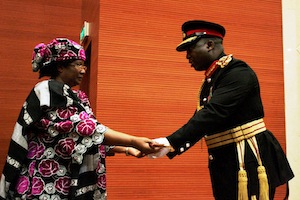 Mutharika, who assumed leadership in 2004 and was serving his second term of office, suffered a heart attack on Apr. 5 at his palace in Lilongwe. According to reports he was rushed to the country’s main referral medical facility, Kamuzu Central Hospital in Lilongwe. He was later airlifted to South Africa, the government said. Throughout Apr. 6 there had been unconfirmed rumours that he had died. But state radio only confirmed the following day that the 78-year-old president had died and declared 10 days of mourning.

Malawians danced in the streets and in marketplaces as a sense of jubilation swept across the country when the Office of the President and Cabinet finally confirmed the death. Hours later, Banda was sworn into office. She is southern Africa’s first female head of state and will fill the post until the country’s general elections in 2014.

She has dedicated much of her life to the economic empowerment of women and women’s rights. Banda, the daughter of a policeman, told IPS in an interview in December 2011 that women were significantly under represented in areas of economic decision making and the key to addressing the situation was to put more of the country’s money in the hands of its mothers.

Nelia Kagwa, the chairperson of the Women Traders Association in Lilongwe, told IPS that she hoped Banda would mend the country’s failing economy.

President Bingu wa Mutharika was once a popular leader. But his fortunes had turned dramatically upon his death as many Malawians were openly celebrating his passing.

Mutharika, a former World Bank economist, became a popular leader after being credited with the country’s agricultural success. In 2005 the country declared a national disaster as more than five million people were in need of food aid because of widespread shortages due to bad harvests.

However, three years later the country produced a bumper harvest, turning it into the breadbasket of the region, mainly because of the success of Mutharika’s fertiliser and seed subsidy programme. Malawi’s economy is largely dependent on agriculture with up to 65 percent of the country’s 14 million population dependent on farming.

But under his leadership Malawi was at odds with its traditionally largest donor, Britain, following a decision by the government to expel the British High Commissioner after he accused Mutharika for "increasingly becoming dictatorial" in a diplomatic telegram.

There were nationwide protests against Mutharika’s rule in July 2011 as Malawians personally blamed him for the coutnry’s economic woes and the persistent fuel and foreign exchange shorates.

Mutharika was criticised for calling in the army to quell the protests as he vowed to crush the rebellion against him. "Now enough is enough. Next time, I will go after the instigators and smoke them out from their hiding holes," he had warned.

On August 2011 Mutharika dissolved his entire 42- member cabinet, and appointed a new one weeks later. He was criticised for including his wife, Callista, as the minister in charge of HIV/Aids and women's affairs.

On Mar. 14, the Public Affairs Committee, an influential grouping of religious bodies, called on Mutharika to either resign in 60 days or call a referendum on his rule. The grouping accused the president of failing to resolve economic and political challenges in the country. He refused to do so.


“Small businesses are now on the verge of collapsing due to the lack of fuel and foreign exchange. We need quick solutions and I hope she will prioritise this,” said Kagwa.

Malawi is one of the poorest countries in the world as 74 percent of the population here lives on less than 1.25 dollars a day, and nearly one in 10 children die before their fifth birthday. The rising cost of basic commodities has added to these woes and the country is also experiencing shortages of necessities such as sugar and bread. The items have become even more difficult to afford since the government introduced a value-added tax of up to 16.5 percent on products such as bread, meat, milk and dairy in June 2011.

“Maize prices have almost doubled in the past year and many families can no longer afford a basic meal,” Kagwa said.

“She won a prestigious award on ending hunger in her community. She could end hunger for many Malawians if she is given chance.”

Banda was awarded the joint Africa Prize for Leadership for the Sustainable End of Hunger in 1997, together with Mozambique’s former President Joaquim Chissano.

James Kaliwo, a street vendor in Lilongwe, told IPS that “a new dawn has risen over Malawi” following Mutharika’s death.

“Things have been getting worse economically and socially. God has answered our prayers. Mutharika caused problems for all of us by failing to improve the economy,” said Kaliwo.

Prominent local political analyst Boniface Dulani told IPS that while it would be too simplistic to assume that Malawi’s problems have ended with Mutharika’s death, there is no doubt that it offers the country an opportunity for a fresh start.

Dulani told IPS that Banda should make the most of her appointment until the country’s general elections in 2014.

“Whilst previously Banda would have had to count on the sympathy vote of Malawians, she could earn the confidence of voters by demonstrating that she has the ability to take Malawi in a new and truly progressive direction. She could seize the opportunity and win over the trust of Malawians who have grown increasingly suspect of those in the corridors of power,” said Dulani.

He said that it is not certain whether ruling party legislators would try to frustrate her agenda as they hold a commanding parliamentary majority.

However, many are hopeful that the country’s economic woes will ease. Dulani said that with the appointment of a new administration, donor support to Malawi would resume.

“Most of Malawi’s recent challenges, including those rooted in a myopic foreign exchange policy and the loss of donor support because of poor governance, can be easily and quickly reversed,” said Dulani.

Malawi’s donor relations suffered greatly following accusations that the southern African country has failed to respect the human rights of lesbian, gay, bisexual and transgender people and the right to freedom of the press. Donors had refused to release up to 400 million dollars and the United States suspended a 350 million dollar grant.

The country’s failing economy, and the fuel and foreign exchange shortages, saw unprecedented nationwide protests against Mutharika from Jul. 20 to 21, 2011. Twenty-one people were killed by the police and 275 were arrested. Banda was a vocal supporter of the protests.

Dorothy Ngoma, a prominent civil society leader who was among those leading the protests against Mutharika, said she has faith that Banda will rescue the country from its economic crisis.

“She is very capable. She is so reliable. I am so sure we will see change in this country very soon,” Ngoma told IPS.

Civil society leaders and some government officials also expressed their joy and support for Banda, who is also leader of the opposition People’s Party, as she addressed supporters and the media outside her home in Lilongwe hours before her inauguration.

“Malawi should adhere to the Constitution of the Republic in moving forward,” she said. At her swearing in ceremony she added: “this is no time for revenge; we need to move forward as country.”

Almost all the country’s cabinet ministers attended the signing in ceremony. One noticable exception was Peter Mutharika, the late president’s brother.

The two-day delay in the announcement of the presdient’s passing led to concerns that there would be a power struggle between Banda and the ruling party. Malawi’s Deputy Minister of Transport Catherine Gotani-Hara told IPS that Mutharika’s allies wanted his younger brother, Peter, to assume office.

It is an issue that Banda and Mutharika clashed on in the past. Mutharika expelled Banda, a former ally, from his Democratic People’s Party for insubordination when she refused to endorse Peter Mutharika as the ruling party’s candidate for the 2014 presidential elections.

Mutharika then excluded Banda from working as a part of his government. She launched the opposition People’s Party in September 2011 but remained vice president, as it is an elected and constitutional office.