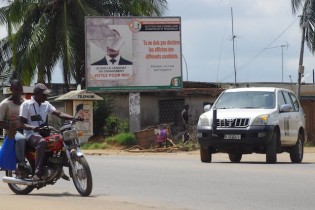 By Robbie Corey-Boulet
Last week’s local elections in Côte d’Ivoire were supposed to be a contest between members of the current governing coalition. But in municipal races, independent candidates claimed more seats than either of the coalition’s two main parties, suggesting possible dissatisfaction with President Alasanne Ouattara at the local level.

By Robbie Corey-Boulet
The extradition of high-level allies of former Côte d’Ivoire President Laurent Gbagbo from Ghana back to their home country, including a most recent one on Feb. 5, has brought renewed scrutiny to the Ivorian judiciary, which critics say is implementing a form of one-sided victor’s justice since the 2010 to 2011 post-election conflict.

By Robbie Corey-Boulet
Nouma Camara, a 40-year-old tailor, remembers waking up on Aug. 20, 2006 to a smell he described as “something catastrophic.” His home in Akouedo village, in Côte d’Ivoire’s commercial capital city of Abidjan, lies adjacent to a large, open-air dumpsite where toxic waste had been dumped the night before.

By Robbie Corey-Boulet
In his black boots and green fatigues – complete with arm patches bearing the name of the national army, Forces Republicaines de Côte d’Ivoire – Ousmane Kone looked every bit the soldier as he stood guard over an electricity and water distribution company one Tuesday afternoon in Abidjan.

By Robbie Corey-Boulet
It seems all of Liberia is paying close attention to the campaign for the Oct. 11 presidential and legislative elections. But Sekou Camara is one exception.

By Robbie Corey-Boulet
International justice advocates are worried that donors will deprive the International Criminal Court (ICC) of sufficient funding next year, hindering the court’s ability to fulfil an expanding mandate that will stretch from Kenya to Libya and potentially Ivory Coast.

New Leadership for the ICC

By Robbie Corey-Boulet
As the International Criminal Court gears up to elect six judges and a new prosecutor, observers are warning that political rather than merit-based considerations could govern the evaluation of candidates.

By Robbie Corey-Boulet
At about 9 pm on May 10, British human rights lawyer Clara Gutteridge arrived at Nairobi’s Jomo Kenyatta International Airport from Dar es Salaam, where she was investigating the arrests of Tanzanians accused of terrorism.

By Robbie Corey-Boulet
A decision to exclude crimes committed in the western city of Kisumu and the Nairobi slum of Kibera from a case against alleged organisers of violence following Kenya’s 2007 election could undermine the International Criminal Court’s effort to combat impunity in the East African nation, civil society groups have warned.

By Robbie Corey-Boulet
On its face, Kenya’s failed bid to defer International Criminal Court cases against alleged organisers of post-election violence in 2007-2008 was a story of changing positions. But to argue that either the U.S. or Africa has switched sides in the debate over the appropriate role of the ICC is too simplistic.