MONROVIA , Oct 9 2011 (IPS) - As the Norwegian Nobel Committee named Liberian President Ellen Johnson- Sirleaf a joint winner of the 2011 Nobel Peace Prize, opposition party supporters were flooding the streets of Monrovia to demand that she be voted out of office in the upcoming election. 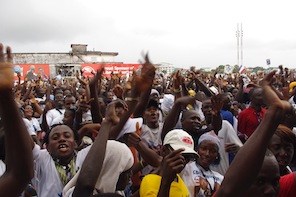 Friday’s announcement immediately became political fodder in a highly charged presidential campaign, highlighting the wide gap between the glowing reception Johnson-Sirleaf receives abroad and the mixed one she receives at home.

The Nobel committee announced that the prize would be divided into three equal parts. Leymah Gbowee, a Liberian peace activist who organised a women’s movement calling for an end to civil war in the West African nation, was also named a winner, as was Tawakkul Karman, a Yemeni journalist and activist who has played a prominent role in that country’s Arab Spring protests.

But in Monrovia, the focus Friday was squarely on Johnson-Sirleaf, Africa’s first elected female head of state who is running for a second term in a vote scheduled for Oct. 11. The prize was awarded on the same day that supporters of the Congress for Democratic Change (CDC), the leading opposition party, marched in support of political change.

In a statement, the Nobel committee said Johnson-Sirleaf had “contributed to securing peace in Liberia, to promoting economic and social development, and to strengthening the position of women.”

On the contrary, the CDC has consistently accused Johnson-Sirleaf of bringing war to the country, citing her early financial support of former President Charles Taylor, now on trial for war crimes and crimes against humanity at The Hague.

Taylor launched a coup in 1989 that plunged Liberia into 14 years of civil conflict that claimed more than 250,000 lives. In 2009, Liberia’s South Africa-style Truth and Reconciliation Commission report included Johnson-Sirleaf on a list of 49 politicians who should be barred from politics for 30 years owing to their ties to warring factions. Johnson-Sirleaf issued an apology to the nation shortly thereafter, saying she only supported Taylor in the hope that he would overthrow dictator Samuel Doe.

Johnson-Sirleaf, a Harvard-educated economist who has previously worked for the United Nations Development Programme and the World Bank, has been accused by her opponents of courting international favour at the expense of voters back home.

Speaking to IPS by phone on Friday, Tubman said the prize was further evidence that the views of the international community did not match those of Liberians.

“If the international community feels that she deserves such a prize, they should watch out for today’s march, because the CDC is prepared to vote her out of power peacefully,” he said.

TQ Harris, a former independent presidential candidate, struck a similar note in an SMS text message sent to supporters and journalists. “This explains why Liberians have yet to get a war crimes court… the international community has an agenda that is not in line with ours,” he said.

Thousands of CDC supporters turned out for Friday’s rally marking the end of the party’s campaign, dancing and drinking in the streets, shouting slogans and brandishing banners. While waiting inside Antoinette Tubman Stadium for the arrival of Tubman and his running mate, international football star George Weah, 36-year-old voter David Mzor described why he thought the decision to award the Nobel Peace Prize to Johnson-Sirleaf was inappropriate.

“I don’t think President Sirleaf deserves it because she has not been able to reconcile the Liberian people. She’s not a reconciler,” he said. “She helped to put our future way back. That was not the right way to remove (dictator Samuel) Doe. There were other alternatives.”

Thomas Queayahn, 19, who was also among the CDC supporters in the stadium, agreed. “She was a fighter before she was a leader,” he said of the president. “She brought war to the country.”

The president’s many supporters take the opposite view, praising her for restoring peace and stability against significant obstacles.

As he watched the CDC marchers go by Friday from his stall on Benson Street, petty trader Prince Worzie hailed the president as a peacemaker. “She has brought peace to Liberia,” he said, adding that he also commended her efforts to promote women within her government. “That alone justifies that indeed she should deserve the award.”

John Ballout, a senator with Johnson-Sirleaf’s ruling Unity Party and a member of her campaign team, said the attempt to paint her as an instigator of the war was a political tactic on the part of opposition leaders “who want to shift the discussion.”

*With additional reporting by Stephen Binda and Saye Messah