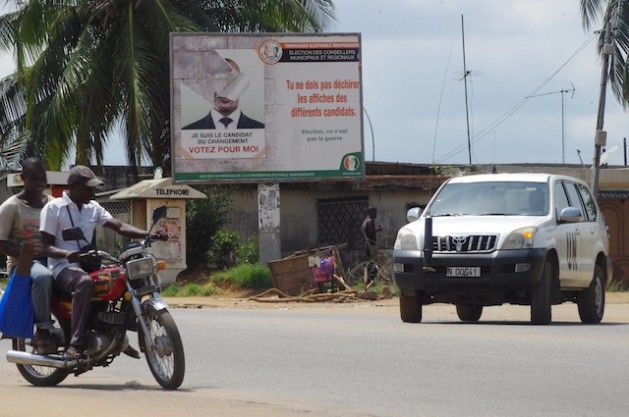 ABIDJAN , Apr 29 2013 (IPS) - Last week’s local elections in Côte d’Ivoire were supposed to be a contest between members of the current governing coalition. But in municipal races, independent candidates claimed more seats than either of the coalition’s two main parties, suggesting possible dissatisfaction with President Alasanne Ouattara at the local level.

Landry Kuyo, secretary general of the My Way Network, a youth organisation that promotes political participation, told IPS he believed the strength of independent candidates nationwide suggested that the population was frustrated with Ouattara and with political parties in general.

“The population does not have confidence in the political parties,” he said. “They want to hear from candidates who will develop their neighbourhoods, not from politicians. That is why the independent candidates appeal to them.”

Official results released on Friday Apr. 26 showed that independent candidates claimed 72 seats, compared to 65 for Ouattara’s Rally of the Republicans (RDR) and 49 for the Democratic Party of Côte d’Ivoire (PDCI). The turnout for those races was 36.44 percent, according to the Independent Electoral Commission.

The platforms of individual candidates mostly featured local development projects, such as proposed upgrades to schools, health centres, markets and transport systems. However, many candidates cited youth employment and reconciliation as larger issues they hoped to tackle. Ouattara has been credited with turning the economy around since coming to office, although at the local level this has not necessarily translated into significant quality of life improvements.

“The success of independent candidates was the main surprise of these elections, which appear to have been more competitive than initially expected despite the (former President Laurent Gbagbo’s Ivorian Popular Front) FPI’s decision to boycott the contest,” Samir Gadio, a London-based emerging markets analyst at Standard Bank, told IPS.

“This suggests the democratic process is maturing and that various party apparatuses are perhaps starting to gradually lose their previously significant influence on Ivorian society.”

The Apr. 21 vote was the first time Ivorians were able to select municipal and regional leaders in more than a decade, due to a prolonged political crisis that made local elections impossible.

The crisis culminated in five months of violence that killed at least 3,000 people after Gbagbo refused to leave office despite having lost the November 2010 presidential runoff vote to Ouattara. Gbagbo was arrested in April 2011 following an intervention from France and the United Nations.

The former president’s FPI chose to boycott the local races, just as it boycotted legislative elections in 2011.

That appeared to leave the field open to the RDR and PDCI, whose support of Ouattara in 2010 helped propel him to victory. The PDCI is led by former President Henri Konan Bedie.

Several of the so-called independent candidates were actually members of the FPI who bucked the party’s decision to boycott. The FPI openly acknowledged this in a statement announcing the suspension of 15 candidates who decided to stand.

Other independent candidates had ties to the RDR or PDCI but were not chosen to represent the parties in the local races.

This was the case of Soumahoro Farikou, an independent candidate in Abidjan’s Adjame district who formerly organised for the RDR. He was passed over in the official selection for the municipal race, and he lost to the RDR candidate by just 1,000 votes, prompting his supporters to take to the streets for two days in protest.

But even though some independent candidates had clear ties to the coalition, they were still running as outsiders, standing against officially-selected candidates who benefited from the parties’ financial resources and support bases.

Throughout the two-week campaign period, there was little debate on national issues. Nonetheless, many RDR candidates pitched themselves as champions of Ouattara’s national policies, vowing to help implement them on the ground.

Kafana Kone, a former government minister who ran successfully on the RDR ticket in Abidjan’s Yopougon district, touted a 10-point platform that included improvements to local transportation systems and market upgrades. But when asked why voters should choose him over his PDCI rival, he first cited his loyalty to the president’s agenda.

“We’ve had a difficult few years, but now we have installed Alassane Ouattara as head of state and given the RDR control of the National Assembly,” he told IPS. “Now we need to make sure the RDR has control at the local level to ensure the best implementation of the president’s programme. I am nothing more than a soldier for this programme’s implementation.”

But Roger Akouman, a 24-year-old university student in Yopougon, told IPS that Ouattara’s government had failed to foster reconciliation following the conflict, and that he wanted municipal candidates to make that goal their focus.

Various rights groups have faulted the government for only prosecuting Gbagbo supporters over crimes committed during the post-election violence, despite widespread evidence that both sides committed crimes.

The country’s armed forces have also been accused of mistreating and torturing Gbagbo supporters, notably in response to a series of attacks on military installations by unknown gunmen last year.

“These municipal elections are very important, because it is the local candidates that are going to be able to help us progress past the conflict,” Akouman said. “So far, the government at the national level has been unable to do that.”

Members of the governing coalition, including Kone in Yopougon, won all 13 of the municipal seats in Abidjan, underscoring its continued clout.

In the run-up to the election, the My Way Network organised a debate for municipal candidates in Abidjan’s Cocody district, something Kuyo said had never been done before in a local race. Of 13 candidates, nine agreed to show up, but in the end only three did – all of them independents.

Kuyo said he hoped the results would make the parties more responsive to voters in the future.

Reacting to early results that first pointed to a strong showing from independents, RDR spokesman Joel N’Guessan indicated Kuyo’s wish may come to pass. “We will learn to better take into account the aspirations of the base,” he told IPS.