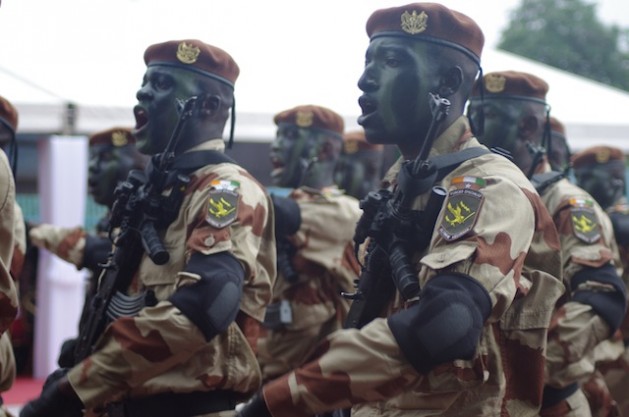 ABIDJAN, Sep 22 2012 (IPS) - In his black boots and green fatigues – complete with arm patches bearing the name of the national army, Forces Republicaines de Côte d’Ivoire – Ousmane Kone looked every bit the soldier as he stood guard over an electricity and water distribution company one Tuesday afternoon in Abidjan.

But his appearance was somewhat misleading. The 22-year-old received no formal training before he was handed his first Kalashnikov rifle last year, and he has never been registered with the Côte d’Ivoire army.

What is more, the building he was guarding was not state property, but rather a private company owned by his “commander,” a former insurgent from the New Forces rebel group or Forces Nouvelles de Côte d’Ivoire (FNCI).

Kone is one of an untold number of fighters who took up arms during Côte d’Ivoire’s recent post-election conflict, which unfolded after former President Laurent Gbagbo refused to cede office despite losing the November 2010 election to current President Alassane Ouattara.

Distraught over reports that fellow members of his Dioula ethnic group were being burned alive at Abidjan roadblocks manned by pro-Gbagbo fighters, Kone did not hesitate to join the pro-Ouattara faction during the decisive battle in the commercial capital in April 2011 that culminated in Gbagbo’s arrest.

“Our friends were being massacred, and we weren’t powerful because we didn’t have weapons,” he said. “Every day we were hiding until pro-Ouattara fighters launched the attack on Abidjan (in April 2011).”

Today, he faces an uncertain future. As Côte d’Ivoire gears up for a long-awaited disarmament, demobilisation and reintegration (DDR) programme, to be conducted in concert with broader reforms to the security sector, thousands of young men are worried that they may have their weapons taken from them.

Analysts say these anxieties could have partly fuelled a recent spate of attacks on military positions that killed at least 12 soldiers in August, marking some of the most significant violence since the conflict ended more than a year ago.

The new DDR campaign, which was reviewed by Ouattara’s cabinet last month but has not yet begun, will not be the first for Côte d’Ivoire. Following a failed coup attempt against Gbagbo in 2002, the country was partitioned for eight years, with the FNCI controlling the north.

Though disarmament, demobilisation and reintegration were attempted during that period, the effort failed for a host of reasons, not least of which was that the conflict had not been resolved.

Alain-Richard Donwahi, Ouattara’s defence and security adviser and secretary of his national security council, told IPS that, prior to the recent conflict, the government estimated around 70,000 combatants needed to be disarmed – 32,000 from the FNCI and 38,000 from what he described as “pro-Gbagbo militia groups.”

He said the government did not yet have good figures for the number of fighters who joined warring factions during the conflict.

Arthur Boutellis, senior policy analyst at the International Peace Institute, said that pro-Gbagbo militia groups would raise the number needing to be disarmed considerably. “Right now, given the numbers, we’re talking potentially about 100,000 people,” he said. “We don’t know exactly, but the numbers are huge.”

Donwahi acknowledged that several key questions still needed to be answered before the disarmament process could begin. One is determining who will actually be eligible for the job training programmes that he said would form the crux of the scheme’s reintegration component.

Describing who might not qualify, Donwahi said: “Some people who come to be disarmed say they’re part of an independent group of combatants. But we know we didn’t have independent combatants here. We had clear chains of command.”

But that analysis does not square with most accounts of the violence. In addition to parallel chains of command within the FNCI, Côte d’Ivoire’s conflict also featured foreign mercenaries and various other militia groups. In addition, the dozos, traditional hunters who have long assumed informal security roles, were active in the fighting and retain a strong presence in large parts of the country, according to observers such as Human Rights Watch.

Though these groups are not likely to be part of the disarmament process, Boutellis said they could serve as potential “spoilers,” and could discourage other combatants from handing over their weapons.

A separate government body set up to disarm civilians, the National Commission for the Fight against the Proliferation of Light and Small Arms, estimates that there are some three million weapons still in circulation. Côte d’Ivoire’s population is roughly 20 million.

More than one year after the conflict ended, Côte d’Ivoire remains highly polarised. Efforts to restart political dialogue between the government and Gbagbo’s Ivorian Popular Front political party have amounted to little. Divisions have only been sharpened by a justice process that many view as one-sided.

More than 100 Gbagbo loyalists have been detained in connection with post-election violence crimes, while no Ouattara allies have been arrested or credibly investigated, according to information provided by prosecutors.

These factors, combined with lingering security concerns, would make it “unrealistic” for the disarmament, demobilisation and reintegration process to focus on weapons collection from the beginning, Boutellis said, as many combatants view their weapons as a kind of “insurance policy.”

“You have to start with reintegration programmes that could lead to a better climate, which could then lead to weapons collection,” he said.

More work needs to be done to develop reintegration programmes, especially when it comes to job training, Donwahi said. “We are not going to create jobs by magic,” he said. “It’s important to match job opportunities to the skills of demobilised fighters.”

Asked which areas the government might prioritise, Donwahi mentioned agriculture and mechanical work as examples.

Even if the remaining steps are done well, the disarmament process remains fraught with danger, Boutellis said. “The problems will come, and I think that already some of these attacks are linked to the fact that combatants don’t know where they will fall,” he said, referring to the attacks on military positions in August. “Some people are scared they will be left out. Some people are scared that they won’t get what they want.”

This holds true for Mohamed Bakayoko, a 20-year-old combatant who, like Kone, joined the national army during the battle for Abidjan and remains unregistered.

He told IPS that he likes the stability of the army – though he does not have a salary at present, he does receive shelter and regular meals, no small thing in a country where unemployment for young men was at 57 percent in 2010, according to the World Bank. Bakayoko wants to be fully integrated into the army so that he can provide for his family.

“Personally, I want to be a soldier, as my family is depending on me,” he said. “I’m thinking about nothing else.”

He said he believed, however, that many unregistered soldiers actually had no appetite for military service and would be amenable to participating in a well-run DDR programme.

“Most of them are waiting for the DDR programme,” he said of his peers. “During the recent attacks, most of them … didn’t want to fight, so they went back to the village.”

The key, Kone said, would be to convince combatants like himself that they can have a viable future outside the army, which means giving them skills beyond what they currently have.

“The only thing I’ve learned since the beginning of the conflict is how to use a weapon,” he said. “So I don’t want to give up my weapon now.”