MONROVIA, Nov 8 2011 (IPS) - Liberians headed to the polls in what appeared to be modest numbers Tuesday morning for a presidential runoff that has been marred by an opposition boycott and the deaths of at least two demonstrators at an opposition rally. 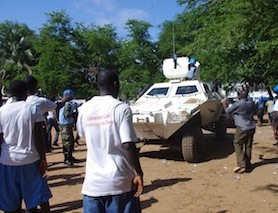 U.N. armored vehicles enter the compound of the Congress for Democratic Change after the first round of shooting. At least two demonstrators died. Credit: Robbie Corey-Boulet/IPS

The deaths occurred Monday afternoon at the Monrovia headquarters of the opposition Congress for Democratic Change, where supporters had gathered to stage a march against the runoff. An altercation allegedly triggered by CDC supporters – some witnesses said they threw stones at police – prompted police to retaliate with tear gas and live rounds.

In Monrovia, polling centres that saw long lines for the first round witnessed markedly fewer voters as they opened at 8am.

Burnnies Korbor, 20, who voted at a high school in central Monrovia, said she believed the low turnout demonstrated that voters were “scared,” but added that she had no worries about coming out to vote for incumbent President Ellen Johnson Sirleaf.

On Friday, Winston Tubman, the CDC’s presidential candidate and a former diplomat, announced that his party would not participate in the runoff, citing what he said were irregularities in the first round. Although the CDC has stood behind its boycott call, his name still appears on the ballot.

Tubman placed second with 32.7 percent in the first round. Sirleaf, who was named a joint winner of the Nobel Peace Prize in October, earned 43.9 percent, but needed at least 50 percent to avoid a second round of voting.

Election monitors commended the Oct. 11 ballot as largely free, fair and transparent. The European Union, the African Union and the Economic Community of West African States all weighed in with condemnations of the CDC boycott over the weekend. The U.S. State Department said it was “deeply disappointed” by the CDC’s position, adding: “The CDC’s charge that the first-round election was fraudulent is unsubstantiated.”

Aaron Weah, programme associate with the International Centre for Transitional Justice in Monrovia, said Monday evening that it was unclear how the boycott and subsequent violence would affect Tuesday’s vote, which the National Elections Commission said would go ahead as scheduled.

While acknowledging Liberia’s conflict-ridden past, Weah said violence had rarely occurred alongside democratic processes that have been widely viewed as credible. In that respect, he said, “there is no precedent” for Monday’s shootings.

He added that he suspected that the police and politicians shared the blame for Monday’s deaths.

“Today is a lesson that we haven’t broken strongly yet from our past,” he said. “Politicians are still trying to put ordinary people in harm’s way.”

Justice Minister Christiana Tah said at a press conference Monday evening that “unconfirmed reports” indicated that one person might have died. But IPS witnessed at least two dead bodies at the CDC compound on Monday afternoon, one of whom was shot in the head at close range after Liberian police stormed the compound with their guns drawn.

United Nations peacekeepers who arrived on the scene could be seen struggling with the Liberian police and trying to bring them under control.

Since the 2003 conclusion of Liberia’s brutal 14-year civil war, which claimed more than 250,000 lives, the U.N. Mission in Liberia has overseen the restructuring of Liberia’s police force, according to an International Crisis Group report released in August, which noted that the continued presence of U.N. peacekeepers “has been the main guarantor of peace.”

“The national security sector is now able to cope with some threats, but continued international presence is imperative in view of the failings of the police and their very limited reach outside the capital,” the ICG report said.

Tah said at the press conference that she had received reports on Monday of gas stations being looted, police officers being stoned and government and U.N. vehicles being damaged.

She also accused CDC leaders of spreading “inflammatory utterances,” and said such conduct was at least partly responsible for the violence.

“You cannot incite people, especially with disinformation, and that has led to the kind of problem that we have today,” she said.