MONROVIA, Oct 11 2011 (IPS) - Liberians cast their ballots Tuesday in an election that has so far been described as orderly and peaceful, though concerns persist that a disputed result could anger voters and fuel minor unrest. 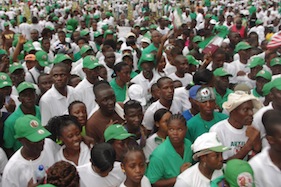 The election is Liberia’s second following the conclusion of a 14-year civil conflict that claimed more than 250,000 lives and destroyed the West African nation’s economy, institutions and infrastructure. In 2005, voters made Ellen Johnson-Sirleaf – who last week was named a joint winner of the Nobel Peace Prize – Africa’s first elected female head of state.

Her top rival that year, former international football star George Weah of the Congress for Democratic Change (CDC), claimed the election was stolen – despite affirmation of the results from a range of international observers – and refused to admit defeat.

This year, Weah is running for vice president under CDC presidential candidate and former diplomat Winston Tubman, but the allegations of fraud have not gone away. The CDC campaign theme song, “It will not hold,” condemns “the rigging of the election” and accuses President Johnson-Sirleaf’s Unity Party of “depending on cheating.”

At the Young Men’s Christian Association (YMCA) polling station in downtown Monrovia on Tuesday, Emmanuel Kollimealyne, an officer with the Community Watch Forum of Liberia, said he had visited four polling stations in the morning and had found the process to be peaceful.

“I think I’m confident now that since the conduct of the campaign was very peaceful, the elections will be peaceful,” he said. “In Liberia we are more mature now.”

But he said there were still doubts that the CDC would be able to accept defeat. “I think it comes from 2005,” he said. “Also, this year they are pre-empting that they will be cheated. They are starting to (sound) the alarm earlier.”

The first voter in line at the YMCA, having arrived at 5am, was Teddy Tubman, the 25-year-old nephew of Winston Tubman.

“I want this election to be peaceful, free and fair,” Teddy Tubman said. “There should be no cheating.”

Asked how he thought the CDC would respond to a loss, he said: “Well, in 2005 the opposition decided to accept the election result because of peace, because of the people. We don’t want this election to repeat what happened in 2005. Any case of cheating might erupt in violence.”

The campaign period came to a close on Sunday, with the parties holding competing rallies in two stadiums in Monrovia. Though large groups of supporters of the CDC and Johnson-Sirleaf’s Unity Party occasionally encountered each other in the streets, the marching and slogan-shouting generally remained good-natured.

Political observers are expecting a close race that could head to a runoff in early November. The National Elections Commission has said results will be announced by Oct. 26, though preliminary results are expected sooner.

CDC Chairman Geraldine Doe-Sheriff has said the party would release its own results, a possibility that has sparked alarm among election monitors. Speaking to reporters Tuesday, General Yakubu Gowon, Nigeria’s former head of state and head of the Carter Center’s 55-person international election observation mission in Liberia, said such a move would be illegal.

“It is not right. The only person to announce the result is the chairman of the National Electoral Commission,” Gowon said. “If they do it, it is against the law and I hope there is a process whereby such a thing can be dealt with. But it will not be accepted as the result.”

Gowon also said the election was going “exceptionally well” despite light rainfall around midday. “People have turned out in great numbers and enthusiastically,” he said. “It has been going well so far and we hope that it will continue to go well in all places.”

Winston Tubman cast his ballot at around 10:30am at a high school in central Monrovia. “Liberians are peaceful people who are seizing the ballot boxes to do what is necessary so that we can get back on a normal path,” he told reporters.

Asked whether he would win, he responded, “Sure, and in the first round.”

But Mother Ainoson, a 56-year-old supporter of Johnson-Sirleaf, said she believed the incumbent would prevail, and that any allegations of fraud that might ensue would be unfounded.

“If you look at the whole aspect, people have security at all of the polling stations, so who will bypass that and cheat?” she said. “So I want to say that everything will be fair.”