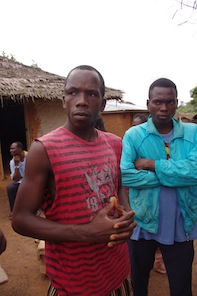 Liberian voters will go to the polls in the second election following the 2003 conclusion of a 14-year civil conflict that claimed more than 250,000 lives and brought instability to the broader region.

President Ellen Johnson-Sirleaf, 72, of the Unity Party, who jointly won the Nobel Peace Prize on Friday, is seeking a second term of office. The incumbent president is running against 15 presidential candidates, including one from the Congress for Democratic Change, which initially earned more votes than her in 2005 (she later won in a runoff).

There is no credible polling in the West African nation, but observers expect the race will be close, potentially resulting in a runoff in early November.

The campaign period has been marked with divisive rhetoric and talk of vote stealing that some observers have warned could spill over into violence depending on the result.

Last year’s disputed election in Ivory Coast sparked a conflict between forces loyal to ousted President Laurent Gbagbo and his successor, Alassane Ouattara, that claimed an estimated 3,000 lives and sent a flood of refugees into Liberia. Liberian mercenaries were also recruited into the fighting, and there are reports that Ivorian Gbagbo supporters have resettled on the Liberian side of the border.

Corinne Dufka, a senior West Africa researcher for Human Rights Watch (HRW), said that while she believed Liberians were committed to maintaining peace, it was important to remember the extent to which past conflicts “have reverberated across each country’s porous borders, causing significant flows of arms, combatants and refugees, and untold human suffering.”

Thomas Kahn, an immigration official stationed at the Behai border crossing in Grand Gedeh County, in eastern Liberia, recommended that the government double the present number of security forces in order to prevent the cross-border trafficking of small arms. He also noted that during the election some security forces would be called away from the border to man polling stations elsewhere in the county.

“Over the past months there has been a problem in Ivory Coast, so we need more manpower at the border now,” Kahn said. “It is a security risk.”

Jerry Zeah, the town chief of Behai, also said he believed there was insufficient security in the area to ensure the safety of residents.

Last month, HRW documented an attack allegedly perpetrated by Gbagbo supporters based in Liberia that killed 23 people in two villages located 25 kilometres south of the Ivory Coast town of Tai. The attack was similar to a cross-border raid carried out in July that killed at least eight people in Ivory Coast.

According to HRW, the attacks are believed to have been launched by youth from Ivory Coast “who served as pro-Gbagbo militiamen during the country’s six-month post-election conflict” and are now based in Liberia. The victims, meanwhile, “tended to support” Ouattara.

Women and children were among the victims in both attacks.

In a statement detailing the July attack, HRW said: “One witness described attackers sticking a gun barrel in the mouth of a man whom they’d trapped; they then shot him. A Burkinabé man living in the area was found with his throat slit.”

Despite this call from HRW, Napoleon Viban, the acting head of the Liberia peacekeeping mission in Zwedru, Grand Gedeh’s capital, said it was up to Ivory Coast authorities to investigate the attacks – even though the perpetrators are believed to be in Liberia.

Several residents of Tai, the Ivory Coast town located near the site of the attacks, said that after the Jul. 18 attack, Ouattara forces “detained a local pro-Gbagbo village leader and fired between his legs during questioning.”

“Côte d’Ivoire’s armed forces must ensure that those who commit attacks, whatever their political affiliation, face their victims before a court of law, and not be subject to the summary executions that too often marked the Ivorian crisis,” Bekele said.

Concerns about the tactics of Ouattara’s forces resonate with Bleblocoula Sylvain, a 28-year-old Ivory Coast refugee who now lives in the Grand Gedeh town of Tuzon. Sylvain lost eight members of his family during a March raid in Diboke. He said he had no intention of returning to Ivory Coast under Ouattara.

“People loyal to him still hold arms,” Sylvain said. “He’s the one to rule the country, but he killed a lot of people. I don’t ever think this government will maintain peace.”

HRW said the border “is notoriously difficult to monitor, because of its length and the thick vegetation that marks the region.” The statement noted that both the U.N. and the Ivory Coast government had agreed to send more forces to the area following the Sep. 15 attack.

Viban noted that the mission was “part of the joint border patrol.” He also said that while the primary goal of the mission was to bolster the capacity of Liberian security forces, the mission “will always intervene in line with its mandate.”

He said that while he believed the situation at the border remained “calm,” even in light of the recent attacks, in the event of electoral violence the U.N. in Liberia will “work with the government to quickly come in when human lives are at stake.”