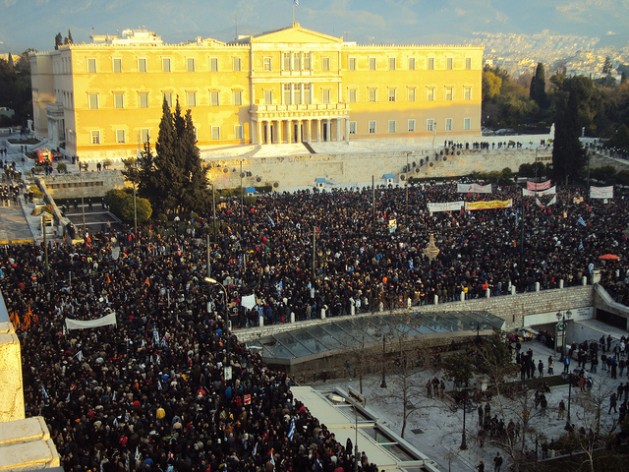 DOHA, May 24 2012 - A European Union summit has ended with a warning to Greece that it will have to stick to its bailout terms if it wants to stay in the eurozone, but failed to resolve Franco-German differences over the issue of eurobonds.

“We want Greece to remain in the euro area while respecting its commitments,” EU President Herman Van Rompuy said early on Thursday after discussions which started on Wednesday evening dragged on for about five and a half hours.

At his first meeting of EU leaders, with the hotly contested issue of shared eurozone debt top of his discussion list, France’s new president made it clear that he intends to stand up to Berlin on European policy.

As Francois Hollande arrived for the summit in Brussels, he told reporters that eurobonds would be up for discussion.

Moments later, Chancellor Angela Merkel stepped out of her limousine and said curtly that she did not think such bonds were a good idea or would help to boost growth.

Hollande said he wanted to see eurobonds “written into the agenda” of the European Union going forward, saying he saw jointly pooled eurozone debt as a fundamental means through which to bolster the debt-stricken single euro currency.

Suggesting this would allow governments to “finance investments,” the French president said that pooling liabilities for past debts was “unacceptable” but that eurobonds could help countries paying high borrowing costs, such as Spain and Italy.

Al Jazeera’s Barnaby Phillips, reporting from Brussels, said that there was “an interesting difference of tone” between the French and German leaders.

“There was some discussion and agreement on peripheral issues,” he said, but disagreement on most key issues.

“I think that difference in tone between Angela Merkel and Francois Hollande is going to be a defining one in the months to come,” he said.

Van Rompuy said the subject of eurobonds was “briefly touched upon” by several leaders “in the framework of deepening the monetary and economic union.”

However, he stressed: “There was nobody asking for the immediate introduction of this.”

He underlined, as leaders begin preparing ideas for a growth pact ahead of a full summit on Jun. 28-29: “We have to consider what the legal implications of all this are.”

Van Rompuy said all EU leaders were “fully aware of the significant efforts already made by the Greek citizens” following “considerable solidarity” shown by eurozone partners and vowed to ensure that EU grants and other means of providing aid would be mobilised.

But he underlined: “Continuing the vital reforms to restore debt sustainability, foster private investment and reinforce its institutions is the best guarantee for a more prosperous future in the euro area.

“We expect that after the elections, the new Greek government will make that choice.”

An earlier draft drawn up by eurozone officials had highlighted the need for “a sufficient parliamentary majority” following the Jun. 17 vote, but Van Rompuy made no reference to this.

Jose Manuel Barroso, the head of the European Commission, said: “Let’s wait for the people of Greece to have their say”, but stressed “we want Greece to remain in the euro area”.